Suspension of 12 Maharashtra BJP MLAs for one year “grossly illegal”; worse than expulsion, disqualification or resignation

In a big relief to the 12 BJP MLAs who were suspended by the Maharashtra Legislative Assembly on 05.07.2021, for a period of 1 year due to “indisciplined and unbecoming behavior resulting in maligning the dignity of the House”, the Supreme Court has held that the suspension beyond the remainder of the concerned (ongoing) Session is unconstitutional, grossly illegal and irrational.

The Court observed that suspension beyond the Session would be bordering on punishing not only the member concerned, but also inevitably impact the legitimate rights of the constituency from where the member had been elected.

The suspended MLAs belong to BJP, the principal Opposition Party in the Maharashtra Legislative Assembly. The Ruling Party is a coalition between the Shiv Sena, the Nationalist Congress Party (NCP) and the Indian National Congress (INC) christened as “Maha Vikas Aghadi”.

On July 5, 2021, 12 BJP MLAs were suspended after the house witnessed heated exchanges between the members of the Opposition Party and the Ruling Party due to an impression formed by the former that the business of the House was being conducted   in unilateral manner, with conscious and engineered effort to suppress voice of the Opposition Party.

In an interesting case where one SBI account holder was left with a balance of Rs. 59/- only in his account due to the existence of another bank account with strikingly similar name in the same branch, the Supreme Court has set aside the “highly erroneous” impugned order passed by the National Consumer Disputes Redressal Commission solely relying upon the suo-moto report called for from SBI during the pendency of the revision application.

The Account Holder Sunil Kumar Maity was informed by the bank that his account number has changed. A sum of Rs. 3, 00, 000 was deposited in this new account number. However, a few days later, his passbook showed a balance of Rs. 59 only. Interestingly, this “new” account number belonged one “Sunil Maity” who had withdrawn a sum of Rs. 1 lakh and 2 lakhs on two occasions.

The bank report submitted before the NCDRC indicated that the bank had every reason to believe that wrong account number was intentionally inserted by the appellant himself. Surprised that the NCDRC relied on this report to pass an order in favour of the bank, the Supreme Court observed that “There was no way that the appellant would have known that the second respondent, namely Sunil Maity had an account in the same branch. No sane person would deposit cash or cheque meant to be deposited in his account in an account number belonging to another person with similar name.”

In a recent ruling, the Madhya Pradesh High Court while entertaining a Public Interest Litigation observed that if a Kazi entertains a dispute and acts as a mediator to settle the dispute between the members of the community that would be permissible, but he cannot adjudicate the dispute like a court and pass an order like a decree.

“…we boast ourselves as an educated society, but we live our lives with double standards”: Allahabad HC condemns prevailing caste system even after 75 years of independence

While condemning the prevailing caste system even after 75 years of independence, Allahabad High Court made a very significant observation in a cold-blooded murder in an alleged honour killing case, that,

Caste system in our society is deep rooted, we boast ourselves as educated society, but we live our lives with double standards. Even after 75 years of Independence we are not able to get out with this social menace. This is pitiable and tragic. It is the moral duty of those sane person, who are well-off, to protect the under-privileged and downtrodden, so that they feel themselves safe, secure and comfortable. Simultaneously, the other group also feel that they are the integral and inseparable part of the society, and it is in the larger interest of the country and high time for the introspection for everyone to give serious thought over the matter.

Can wife claim maintenance under S. 125 CrPC where appeal is pending against divorce granted under S. 13 HMA?

A husband approached the Allahabad High Court claiming that the Family Court could not have granted maintenance to wife under Section 125 CrPC when divorce was already granted in his favour under Section 13 of Hindu Marriage Act.

Can a girl be treated as property and given in donation? Bom HC addresses in light of “Daanpatra” executed by father of a daughter

Bombay High Court while addressing a case wherein a father executed Daanpatra to give the minor daughter in donation to a baba observed that  A girl is not property that can be donated and further directed the Child welfare committee to ascertain if the child could be declared as a child in need of protection.

High Court made a very pertinent observation in the case which was,

When the girl as per her own statement is minor, then why the father who is in all respect guardian of the girl should give the girl as Daan? A girl is not a property which can be given in donation.

Moving to another very interesting matter from Calcutta High Court, it was noted that a 80 year old widow had approached the Court to seek direction towards her daughter-in-law to provide for her maintenance as she had taken compassionate appointment on the death of her son.

High Court held that the daughter in law was bound by the undertaking by which she had obtained the compassionate appointment.

Delhi High Court in a recent decision expressed its anguish at how provisions such as Sections 354A/506 IPC are falsely invoked at the drop of a hat to register one’s displeasure at the conduct of another individual.

In this false invocation of sections pertaining to sexual assault case, the Court stated that such instances merely trivalise the offence of sexual harassment and casts a doubt on the veracity of the allegations filed by every other victim who has in reality faced sexual harassment, thereby setting back the cause of women empowerment.

A Fast Track Court of Thiruvanathapuram addressed a case wherein a minor boy aged 9 years old was sexually assaulted by a 53-year-old man who had squeezed the boy’s private part causing him pain.

In this case, Bench expressed that the accused is a prudent man, well acquainted with the prose and cons of his misdeeds. His attitude shows his scant respect and honour for the legal system and morality. So he is not entitled to get the benevolent provisions of the Probation of Offenders Act, 1958.

In view of the said observation, the accused did not deserve any leniency for the sentence and was imprisoned for 5 years along with Rs 25000 fine.

Husband’s company can have ‘Virat Kohli’ as a brand ambassador, but cannot provide maintenance to wife: Man tried appearing as a pauper? Saket Courts adjudicates

A District Court while addressing a case of maintenance claimed by a wife wherein the husband stated that he was a businessman but had no monthly income and was sustaining himself on charity and borrowing from relatives and friends, found that the husband’s company was one of the manufacturers of brand “too yum” and the brand ambassador of the said brand was ‘Virat Kohli’, hence it looked highly improbable that a company which is running into great losses was in a position to afford a celebrity of such stature for the advertisement of its product.

Court made an observation that “It cannot be believed that a person who was capable of supporting a family by getting married, would all of a sudden become devoid of all sources of income.”

This is indeed is a very interesting case from Saket Court of Delhi.

Due to doctor’s lack of skill and reasonable standard of care a minor was wrongly treated due to wrong diagnosis.

In an unfortunate case of medical negligence, wherein an Ayurveda Doctor gave wrong treatment to a child i.e. gave the treatment of Measles instead of Steven Johnson Syndrome, Commission observed that,

The patient at her young age of 12 years suffered very serious and potentially fatal SJ syndrome. It was the patient’s sheer good luck that she survived in spite of such grossly inappropriate/inadequate treatment at every stage.

Therefore, the patient was awarded a lump sum amount of Rs 10 lakhs.

A new circular has been issued by Central Industrial Security Force (CISF) which handles airport security on January 19, 2022. As per the circular, no passenger shall be permitted to carry more than one hand bag, other than the exceptions issued by the Bureau of Civil Aviation (BCAS). The circular noted that passengers are flouting the rule and on average carrying 2-3 bags to the screening point which causes congestion and inconvenience to other passengers.

CISF has instructed all airlines and airport operators to implement the ‘One Hand Bag Rule’ more meticulously to ease out congestion.

The Amendment requires all the high pressure cylinders and Cryogenic containers used for filling of Non-Toxic, Non-Flammable Gases and Liquids to have permanent and tamper proof marking in form of Bar Code or RFID or QR code or any means of electronic identification number at conspicuous place on cylinders and containers.

The amendment requires every active pharmaceutical ingredient (bulk drug) manufactured or imported in India to bear Quick Response code on its label at each level packaging that store data or information readable with software application to facilitate tracking and tracing.

The Amendment Rules will come into force from January 01, 2023. 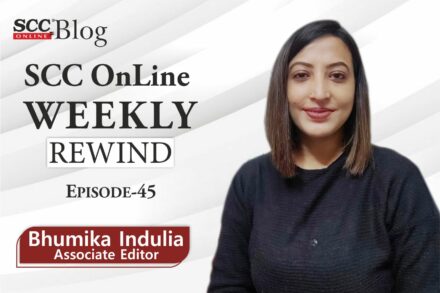 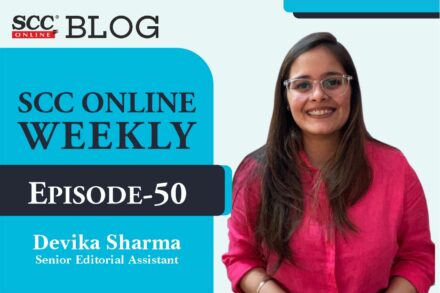 Devika Sharma in 50th episode of SCC Online Weekly Rewind, gives an insight on Order that raised an uproar in State of Karnataka with respect to “#hijabban” to a sexual harassment complaint from an employee in ScoopWhoop 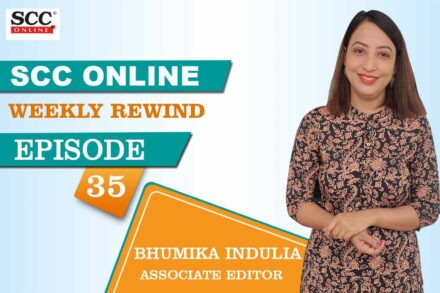