If a Kazi entertains a dispute and acts as a mediator to settle the dispute between the members of the community that would be permissible, but he cannot adjudicate the dispute like a court and pass an order like a decree.

A Public Interest Litigation was filed alleging that respondents 4 to 8 were running parallel judicial system against the provisions of the Constitution of India and also against the established system of law and justice in this country. It was stated that they were running their own courts and passing orders and decrees in their personal matters.

According to the petitioner, respondent 7 had proceeded with the matter and ordered the Talaq (divorce) by way of Khula which was not permissible under the Indian judicial system. The petitioner had alleged that respondent 7 under the shelter of respondents 4, 5 & 6 was entertaining such types of disputes and passing the orders in the matter which were liable to be brought before the Court for adjudication.

Since no action was taken, the petitioner approached this Court by way of the Public Interest Litigation.

Respondent 6, All India Muslim Personal Law Board had submitted that the personal law relating to marriage and dissolution of marriage has to be governed by the personal law of Muslims as recognized by them in terms of their religious denominational texts. It is further submitted that clear instructions are given to Kazis who are appointed by the All-India Muslim Personal Law Board not to entertain the disputes wherein the parties thereof have already approached the Court of Law or do not consent for an amicable resolution of the dispute. Thus, they are not parallel judicial systems established in derogation of or in conflict with the recognized judicial system in the country.

High Court stated that in view of the Supreme Court decision in Vishwa Lochan Madan v. Union of India, (2014) 7 SCC 707 and the arguments advanced by the Senior Counsel A.M. Mathur, the order passed by Chief Kazi on an application filed by respondent 8 had no legal sanctity.

The Bench held that the Kazi is only entitled to enter into a negotiation/mediation between parties in order to settle the dispute.

Additionally, the Court added that, the Legal Services Authority, Jabalpur and Indore has trained more than 70 volunteers of different communities and religions to act as mediators to settle the dispute between the members of the community out of Court.

While disposing of the writ petition, High Court stated that this Court won’t express any opinion in respect of the matrimonial dispute of the parties though they are free to avail the remedy available under the law.[Aadil v. Union of India, 2022 SCC OnLine MP 123, decided on 12-1-2022]

Vivek Dalal, AAG for the respondent/State.

Revisional power under Haryana General Sales Tax Act, 1973 can’t be exercised after its repeal on 1.4.2003

Justice Karnan Matter: Detailed judgment out; 2 of the 7 judges acknowledge the need to debate the Judicial Appointments and Removal methods 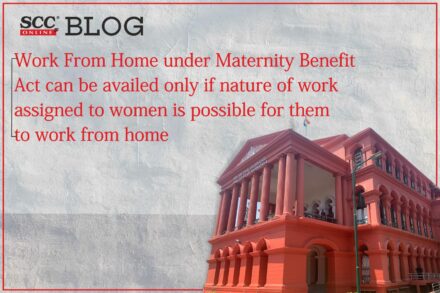 Work From Home under Maternity Benefit Act can be availed only if nature of work assigned to women is possible for them to work from home: Kar HC