Delhi High Court: In a case filed by Shilpi Chaudhary (‘petitioner’) seeking quashing of FIR, which was registered alleging offences under Section 384 and 506 Penal Code, 1860 (IPC) and have now reached settlement, Jasmeet Singh, J. observed that considerable time of the police and judiciary has been wasted and thus, directed the petitioner to provide sanitary napkins to a girls’ school and the complainant- advocate (‘respondent 2’) to undertake pro bono work to the best of his ability and capability for the next 3 months.

The petitioner sought legal professional consultancy from Brajesh Pandey/complainant-advocate and his colleague Ms. Sudha Saxena and despite rendering best professional services, the petitioner misbehaved and did not pay their professional fee, hence the FIR was registered.

However, during the pendency of the proceedings, a compromise was reached before the Delhi Mediation Centre, Karkardooma Courts, Delhi on 26-02-2022, wherein the parties decided to put a quietus to the FIRs and undertake to cooperate with each other in getting the FIRs quashed. Thus, the instant petition was filed by the client.

The Court noted that the police machinery has been put in motion on account of the acts of commission & omission on behalf of the parties and useful time of the police has been wasted which could have been utilized for important matters, hence, the parties must do some social good.

The Court quashed the FIR and directed the petitioner to provide sanitary napkins in a girls’ school not having less than 100 girls from Class-VI to XII for a period of 2 months, which will be identified by the Assistant Public Prosecutor.

The Court further directed Mr. Brajesh Pandey, Advocate (respondent 2) to report to the office of Delhi High Court Legal Services Committee and undertake pro bono work to the best of his ability and capability for the next 3 months.

Chh HC | Medical examination necessary for proving charge of inebriation; order of removal from service on basis of oral evidence set aside 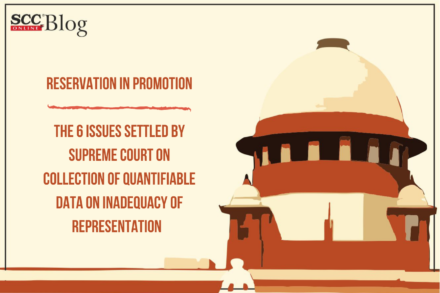 Reservation in promotion: The 6 issues settled by Supreme Court on collection of quantifiable data on inadequacy of representation