Punjab and Haryana High Court: The Division Bench comprising of Ravi Shanker Jha, CJ., and Arun Palli, J., heard the instant petition wherein the issue before the Bench was whether a partner can claim the expedience of erstwhile partnership firm in an individual capacity. The Bench stated,

“The petitioner herein having applied independently without any partners, consortium or joint venture, cannot rely upon the technical qualifications of a third party (erstwhile firm) to claim eligibility.”

The petitioner-A.G. Construction Co. was a proprietorship, which had submitted a bid in response to a tender released by the respondent authority. The bid submitted by the petitioner was rejected upon technical evaluation by the duly constituted committee; the representation against rejection of its bid had also been declined. Earlier, the petitioner was a partner in B.G. Constructions Co. (erstwhile partnership firm), and held 50% share. The said firm was dissolved on 25-06-2019 and it was agreed between the partners that they were free to set up their new ventures and could also use the technical and financial credentials of the firm corresponding to their respective shares.

The eligibility for applying for tender, as set out by the respondent was:

Reliance was placed on the judgment of Supreme Court in New Horizons Ltd. v. Union of India, (1995) 1 SCC 478, wherein it was held that in the absence of any exclusionary clause in the tender document, it could not be said that past experience of a partner of the firm could not be considered. The petitioner had argued that partnership firm is not a separate legal entity but only a compendious mode of describing its partners, therefore, the experience of the firm is indeed the experience of its partners, and thus, ought to have been reckoned, while evaluating the eligibility of the petitioner.

Whether the experience gained by erstwhile partnership firm could be construed as experience of the petitioner in his individual capacity?

The experience in the firm is acquired by the combined, collective and integrated labour of its partners, who, apart from their individual investments, had pooled in their respective resources, skill, knowledge, experience, ideas and information.

The Bench opined that it was the firm that had executed the project and not the partners individually. It is true that from the same subject of experience, more than one can gain experience, however, that must not by itself evince the conclusion that each person gaining ‘experience’ (limited to their contribution) in the output jointly created by them, is entitled to the benefit of the output in its entirety.

The experience gained by the erstwhile firm was acquired owing to combined, collective and integrated labour and resources of its partners, and hence, was so inseparably interwoven that it was neither divisible nor could it be apportioned amongst its partners. Unlike a joint holding where a co-sharer has a right to seek partition of his defined share.

Hence, the Bench opined that coercing a tender inviting authority to blindly treat experience in the name of an erstwhile partnership firm as the experience of the partner in his individual capacity, would militate against every judicious consideration.

Whether the work experience of the firm could be claimed in proportion to the share  held by the petitioner?

The financial stakes or share held by a partner per se has no nexus with the experience he is required to possess in terms of the tender conditions. In other words, experience is not a commodity that could be acquired for consideration

If the project executed by the firm was reduced in proportion to the share of the petitioner (50%), then, as a necessary consequence, not only the work/project but even the experience that stems from its execution would lose its character and conclusivity, for that too would be reduced proportionately.

Lastly, the Bench opined that the interpretation, construction and as to how a provision, clause or a condition of a tender document has to be construed is primarily the domain of the author of such document and in the instant case no one else was better positioned and equipped than the authority itself in understanding the tender document’s requirements. Hence, the Bench denied existence of unfairness, arbitrariness, irrationality or mala fides, either in the respondent authority’s rejection of the experience certificate, or in the decision-making process which preceded the respondent authority’s rejection of the petitioner’s technical bid being non-responsive. Consequently, the petition was dismissed.[A.G. Construction Co. v. Food Corporation of India, 2021 SCC OnLine P&H 306, decided on 10-02-2021]

For the Petitioner: Adv. Puneet Gupta,

For the Respondent: Adv. K.K. Gupta,

SEBI bans Kishor Biyani and other promoters of FRL from securities market; Rs 17.78 crore to be disgorged for the wrongful gains made by them 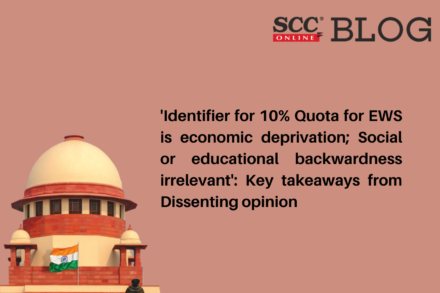