Delhi High Court: In an application filed by the applicant who is a UP Police official, charged under Section 302, 120-B and 34 Penal Code, 1860 (‘IPC') seeking regular bail on the ground that the applicant was granted interim bail and never misused his liberty, Rajnish Bhatnagar J. denied bail clarifying that grant of interim bail and grant of regular bail on merits are two different aspects and simply because the petitioner was on interim bail for a certain period of time does not entitle him to grant of regular bail when the facts of the case speak otherwise. The Court also remarked “at the time of grant of interim bail to the petitioner, the merits of the case were not considered.”

The complainant, Ramesh Chand who is father of the deceased alleged that his son aged 25 years who was working as an LIC agent went to the house of Ajay Singh and his friend Sarvesh (‘bail applicant’) regarding policy on 19-07-2018 and went missing. An FIR was registered under Sections 364 and 34 Penal Code, 1860 (‘IPC'). The investigation was conducted and two were arrested, out of which the petitioner is employed in U.P. Police and his co-accused is employed in Reserve Police Forces (‘RPF'). The charges framed in the charge sheet were under Sections 302, 120-B and 34 IPC.

Counsel for petitioner contended that the petitioner/accused who is on interim bail can be granted regular bail. The State, however, opposed the application by contending that the petitioner, despite being the member of a disciplined force, he, along with the co-accused have committed a heinous offence.

The Court, on perusing the evidence placed on record and examining the witnesses and their statements, noted that the allegations against the petitioner are grave and serious in nature and according to the prosecution, the petitioner who is employed in UP Police has killed and disposed of the body of deceased Prem Kumar aged around 25 years along with his co-accused one of whom namely Ajay Singh is also a constable in RPF.

Placing reliance on Satish Jaggi v. State of Chhattisgarh, (2007) 11 SCC 195, the Court dismissed the bail application in view of the nature and gravity of the offence, its impact on society and severity of the punishment of the offence.

Mr. Raghuvinder Varma, APP for the State with Inspector Rahul Raushan, Advocates, for the Respondent. 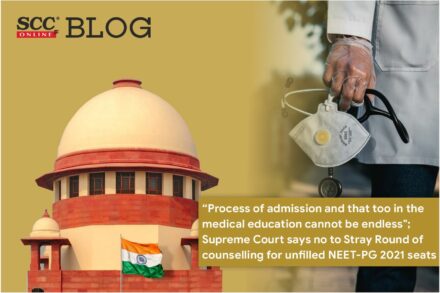 “Process of admission and that too in the medical education cannot be endless”; SC says no to Stray Round of counselling for unfilled NEET-PG 2021 seats