Supreme Court: The Division Bench comprising of M.R. Shah and B.V. Nagarathna, JJ., stayed the impugned order of Bombay High Court wherein the High Court had quashed the assessment order under Income Tax Act, 1961 and had further cautioned that if such orders continued to be passed, the Court will be constrained to impose substantial costs on the concerned Assessing Officer to be recovered from his/her salary.

The petitioner had impugned the assessment order dated 08-06-2021 along with the demand notice issued under Section 156 for initiating penalty proceedings under Section 274 read with Section 270A of the Income Tax Act, 1961. According to the petitioner, the assessment order had been passed without following the principles of natural justice as his request for personal hearing had not been considered and most importantly the reply/objection filed in response to the show cause notice with the draft assessment order had not been considered.

Holding that the assessment order was issued without application of mind the Bombay High Court set aside the impugned order and also the consequential notices. The High Court observed that Sub Section 9 of Section 144B of the Act provides that any assessment made shall be non-est if such assessment is not made in accordance with the procedure laid down under this section. Therefore, the High Court held that the impugned order was non-est and directed the Assessing Officer to take steps in accordance with law.

Notably, the High Court had passed additional directions under para 9 of the order which reads as:

“Respondents are put to notice, and Mr. Sharma to circulate this order right from the Revenue Secretary to everybody in the Finance Ministry, that if such orders are continued to be passed, this Court will be constrained to impose substantial costs on the concerned Assessing Officer to be recovered from his/her salary and also direct the department to place such judicial orders in the career records of such Assessing Officer.”

Aggrieved by the aforementioned order of the High Court Union of India had approached the Supreme Court to assail the impugned High Court order contending that the High Court ought not to have entertained the Writ Petition and ought to have relegated the original writ petitioner to avail statutory remedy of appeal before the CIT(A).

It was further submitted by the State that even the observations made by the High Court in para 9, were also not warranted in the facts and circumstances of the case, more particularly, when the entire procedure before assessment was followed and thereafter even the legislature also deleted the provision of sub-section (9) of Section 144B of the Act retrospectively with effect from 01-04-2021.

Considering the arguments of ASG, Mr. Balbir Singh, the Bench issued notice in the matter. Notably, the Bench had also ordered that the observations made by the High Court in para 9 of the impugned judgment and order be stayed. 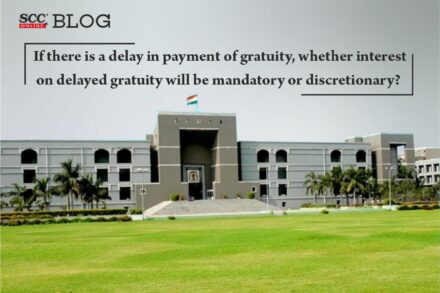 If there is a delay in payment of gratuity, whether interest on delayed gratuity will be mandatory or discretionary? Guj HC decides

Bom HC | Decree passed against a company can’t be executed against an individual; proprietor’s application for discharge allowed