Delhi High Court: The Division Bench of Manmohan and Dinesh Kumar Sharma, JJ., addressed a matter wherein the decision of Income Tax Appellate Tribunal for the Assessment Year 2011-12 was challenged.

Appellant’s Counsel stated that the respondent-assessee had appeared and cooperated in the assessment proceedings and had not raised any objection about non-service of notice under Section 143(2) of the Income Tax Act, 1961 during the entire assessment proceedings and therefore, the assessee was precluded from taking any objection that the notice was not issued in time in accordance with Section 292BB of the Act.

Further, the appellant stated that the Tribunal had erred in ignoring Section 124(3) of the Act which mandated that issue regarding jurisdiction of Assessing Officer cannot be challenged after one month from the issuance of notice under Section 143(2) of the Act or after completion of assessment proceedings, whichever is earlier.

High Court stated that it was in agreement with the Tribunal that Section 292BB does not give the power to condone the failure or delay in issuing the statutory notice required to be issued under Section 143(2) of the Act. Section 292BB deals with the failure of service of notice and not with regard to the failure to issue notice.

The issue of jurisdiction goes to the roots of the cause and such an issue can be raised at any belated stage of the proceedings including appeal. 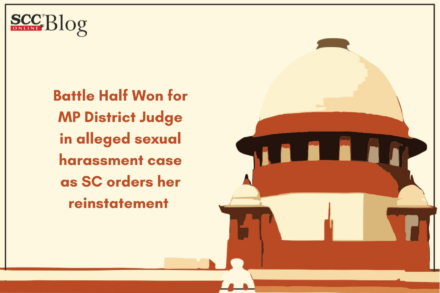 Harassed, transferred, left with no choice but to resign: Read how this MP District Judge won half the battle in alleged sexual harassment case as SC orders her reinstatement

Madras High Court directs authorities to impose strict laws on consumption and distribution of alcohol and to curtail accessibility of alcohol, especially to younger generation