Madhya Pradesh High Court: The Division Bench of Sheel Nagu and Anand Pathak, JJ., decided upon a petition which was in reference under Section 15(2) of The Contempt of Courts Act, 1971 sent by Judicial Magistrate First Class, Datia in respect of the conduct of respondent.

A criminal case was going on before the concerned trial Court in which accused were facing charge of offence under Sections 452, 294, 323/34 and 506(part II) of IPC. On 10-02-2021 case was fixed for prosecution evidence. Respondent -Pankaj Mishra who was a practicing Advocate at District and Sessions Court, apparently appeared for complainant, although at the time of appearance he did not file Vakalatnama on behalf of complainant nor any application under Section 301 of Cr.P.C. was filed. It appeared that the prosecution witness went out from courtroom for the time being during cross examination which was taken note of by the trial Court and matter was kept after tea break. After tea break when trial Court sought explanation of conduct of prosecution witness and asked the accused counsel for relevance of questions asked by him then counsel for the accused showed inclination to answer but sought moving of complainant counsel out of courtroom so that his defence may not be disclosed to the witness. After discussion with counsel for accused/defence, complainant and his counsel were called back. This step infuriated counsel for the complainant (respondent herein) and he made following remarks:

An affidavit has been filed by the respondent Pankaj Mishra on 13-09-2021 and without trying to explain the event from his perspective at the outset he tendered unconditional apology. It is his submission that in respect of alleged incident mentioned in the order-sheet dated 10-02-2021, contemnor by filing his reply at the earliest, tendered unconditional apology before the Judicial Magistrate First Class, Datia (trial Court) and denied the occurrence of any such event. He also prayed for recalling of the observation mentioned in order-sheet dated 10-02-2021. He expressed his immense respect to this Court as well as all other Courts of law and expressed his commitment to do everything to protect the dignity of judiciary.

The Court started with the quote of French Writer Vauvenargues “Emotions have taught mankind to Reason” in order to elaborate concept of Justice. The Court further went on to remind that Law is a Noble Profession and Bar and Bench are two wheels of the chariot of justice. In fact Bar is the genus from which species of Judges, Advocates, Senior Advocates and other Constitutional Legal Functionaries like Attorney General, Advocate General etc. evolve. Therefore, Bar and Bench share common platform for the cause of justice. All other professions are guided by the spirit of Service and Integrity but this profession beside this spirit, also primes Compassion, Mercy and above all Empathy.

The Court reiterated that Spirit of Adjudication and the role of Bar and Bench in reaching to the cause of justice and unless both the wheels do not move in tandem then casualty is Justice and nothing else.

The Court was of the opinion that, In the present case, learned Judge was a female Judge and it was expected from the Bar members that they will appreciate the multitasking performed by a lady judge while taking care of her home, family as well as work front and therefore, more thoughtfulness and sensitivity is required in this regard. Therefore, it appeared that JMFC rightly referred the matter for contempt. But at this juncture, respondent at the outset had expressed unconditional apology and keeping the quote “To err is human and to forgive is divine” in mind the Court believed that it is in the interest of cause of justice that bonhomie be revived so that matter may proceed further without causing delay and friction.

The Court issued certain directions while disposing of the petition: 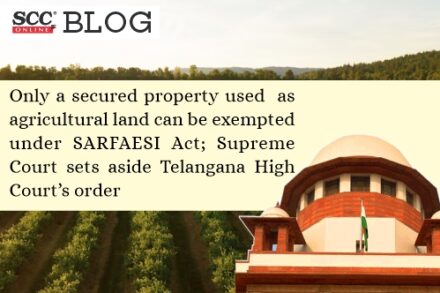 Only a secured property used as agricultural land can be exempted under SARFAESI Act; Supreme Court sets aside Telangana High Court’s order