Bombay High Court: A Division Bench of Surendra P. Tavade and Ranjit More, JJ., while dealing with a case in regard to homicidal death upheld the decision of the trial court which was in challenge before the Bench.

In the present case, appellant preferred the appeal against the Judgment passed by Additional Sessions Judge wherein the appellant was charged for the offence punishable under Section 302 of Penal Code, 1860.

Later on the next day of the said event, the informant received a call from appellant’s father-in-law who further informed him that appellant had killed Zuber (deceased) and had locked the shutter of his factory. On receiving the said information, informant enquired the same with the accused who confessed the same.

Thereafter, informant took the appellant to the Police Station and further appellant took the police to the factory where he had killed Zuber and directed towards his dead body. Appellant was arrested and after the completion of trial was punished under Section 302 IPC.

Trial Court relied on the extra-judicial confessions along with the circumstantial evidence.

J.P. Yagnik, APP for the Respondent-State, submitted that, Subsequent conduct of the appellant of showing remorse for his acts and all the other facts stated above supported the extra-judicial confession.

For a crime to be proved, it is not necessary that the crime must be seen to have been committed and must in all circumstances to be proved by direct, ocular evidence, by examining before the Court those persons who had seen its commission. Thus offence can be proved by circumstantial evidence also.

Reference to the decision in Sharad Birdhi Chand Sarda v. State of Maharashtra, (1984) 4 SCC 116 was made, wherein while dealing with circumstantial evidence it was held that, onus was on the prosecution to prove that the chain is complete and the infirmity of lacuna in the prosecution cannot be cured by a false defense or plea.

High Court on perusal of the facts and circumstances of the case noted that prosecution established the homicidal death of the deceased. Appellant had made voluntary extra-judicial confessions which were corroborated by other circumstances namely taking the police and witnesses to the premise where the incident occurred.

Thus, the prosecution proved the chain of circumstances that lead to the homicidal death of the deceased, said circumstances unerringly pointed out the guilt of the appellant.

All HC | Wife’s appeal against divorce decree withdrawn due to reconciliation and cohabitation with husband. Later, husband passed away. Is she entitled to maintenance under Hindu Adoptions & Maintenance Act? Read on 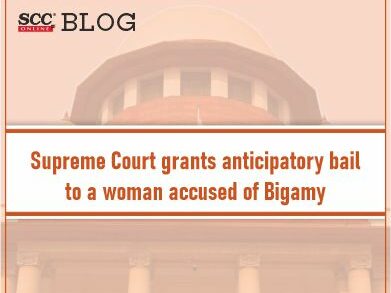