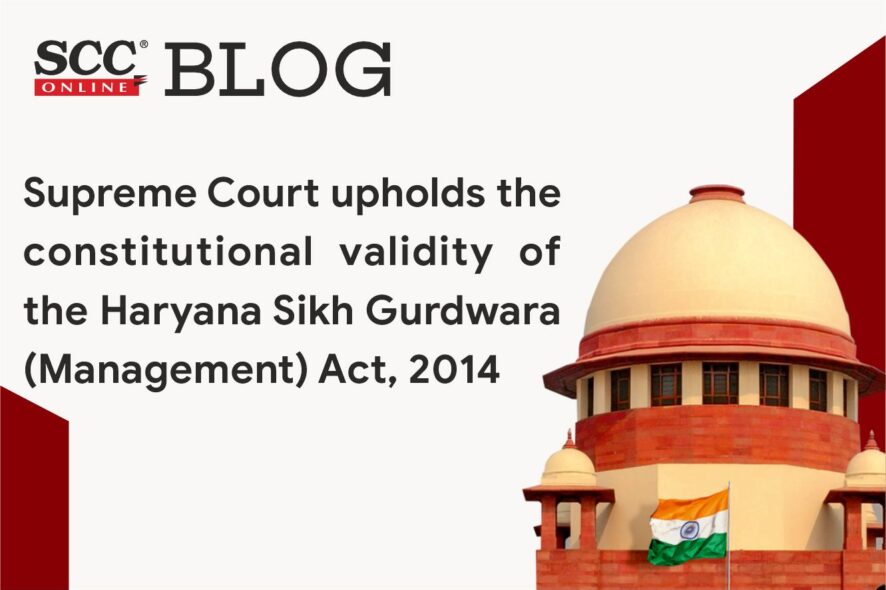 Supreme Court: In the writ petitions challenging the constitutionality Haryana Sikh Gurdwara (Management) Act, 2014, the division bench of Hemant Gupta* and Vikram Nath, JJ. has upheld the constitutional validity of the said Act.

The Court observed that the Statement of Objects and Reasons of the Haryana Sikh Gurdwara Management Bill, 2014 provides that the Bill is an earnest effort to provide a legal procedure by which the Gurdwaras can be brought effectively and permanently under the exclusive control of the Sikhs of Haryana for their proper use, administration, control and financial management reforms to make it consistent with the religious views of the said community.

The Court noted that, earlier the Sikh Gurdwaras in the State are being governed by the provisions of the Sikh Gurdwaras Act, 1925 and the rules and regulations made thereunder, but in view of the demands of the Sikhs in the State of Haryana, it was decided to introduce the Bill in terms of powers conferred under Article 246 read with Schedule VII, List II, Entry 32 of the Constitution of India, as also in pursuance of Section 72 of the Punjab Reorganisation Act, 1966. It is, thereafter, the Haryana Act was enacted which came into force on 14.7.2014

The ground of challenge is that the Haryana Act is against the constitutional provisions, the statutory provisions of the 1966 Act and is also divisive in its intention to create dissentions amongst the followers of the Sikh religion, and in violation of the fundamental rights conferred under Part III of the Constitution.

The Court framed the following questions for consideration:

The Court concerning question no. 2, observed that the 1957 Act is a statute to empower the Central Government to issue directions from time to time, so that on account of creation of separate States, such statutory bodies in the new States can function smoothly. It defines the “inter-State corporation” as any body corporate constituted under any of the Acts specified in the Schedule and functioning in two or more States by virtue of Section 109 of the 1956 Act. Further, the 1925 Act came to be inserted in the Schedule in the year 1972. Therefore, in respect of such inter-State corporations, the Central Government could issue directions in terms of the 1957 Act, only to give effect to the reorganisation of States so that the inter-state entity can function and discharge the statutory mandate in the States so constituted.

Placing reliance on the ruling in Swaran Lata v. Union of India, (1979) 3 SCC 165, Jagtar Singh v. State of Punjab, (1972) 1 SCC 171 , D.A.V. College v. State of Punjab, (1971) 2 SCC 269 , wherein it was held “that the power of Central Government to issue directions was for a limited period i.e., till other provision was made by law”, the Court observed that “such directions were transitional in nature so that the functioning of inter-State corporations is not obstructed or curtailed on account of reorganisation of the States, and neither the 1956 Act nor the 1966 Act nor the 1957 Act has taken away the legislative competence of the States to legislate on the subjects which finds mention in List II of the Seventh Schedule and/or in respect of matters falling in List III of the Seventh Schedule in the manner prescribed” Thus, the 1956 Act or the 1966 Act empowers the Central Government to issue directions to make the inter-state entity functional, but the Central Government has not been empowered to legislate in respect of such inter-State bodies which came to be operational in one or more States due to the reorganisation of the States.

The Court further took note of the ruling in Sehajdhari Sikh Federation v. Union of India, 2011 SCC OnLine P&H 17374, wherein the Court held that in terms of Section 72 of the 1966 Act, the Central Government cannot issue a direction which has the effect of modifying the statute i.e., the 1925 Act. The High Court thus struck down the notification holding that Section 72 of the 1966 Act empowers the Central Government to issue directions pertaining to functioning and operation of an inter-State body corporate. However, the Court noted that this decision by the High Court was pending consideration and during the pendency of the appeal, the Parliament passed the Sikh Gurdwara (Amendment) Act, 2016 with a view to amend the 1925 Act retrospectively. Later, the High Court disposed of the appeal by observing that the said amendment shall be deemed to have come into force with effect from the said date.

Moreover, the Court took note of the ruling in Mullaperiyar Environmental Protection Forum v. Union of India, (2006) 3 SCC 643, wherein it was held that “the power of the State to enact laws in List II of the Seventh Schedule is subject to parliamentary legislation under Articles 3 and 4. The State cannot claim to have legislative powers over such waters which are the subject of an inter-State agreement which is continued by a parliamentary enactment” and observed that the said judgment is in respect of irrigation or water projects wherein the issues were to be decided between the two states by agreement, which is not an issue in the present proceedings. Section 108 of the 1956 Act itself contemplated that if disputes are not settled, the Central Government would decide. Thus, the issue that was raised and decided is quite distinct from the issue arising in the present case.

The Court further took note of the judgments in Kashmir Singh v. Union of India, 2002 SCC OnLine P&H 766 and Kashmir Singh v. Union of India, (2008) 7 SCC 259, wherein it was held that Section 72(1) is not intended to be a measure for all times to come and that successor States are competent to make other provisions by law in respect of such body corporates. The object of the 1966 Act was to make necessary, supplemental, incidental and consequential provisions in relation to reorganisation of the State of Punjab, and the competent legislature, would be well within its power and competence to provide otherwise than the existing laws. Therefore, the successor State may, in its wisdom, could say that the 1925 Act would not apply to the said State. Thus, the Court held that “the power of the Centre to issue directions under Section 72 of the 1966 Act is a transitional provision to ensure smooth and continuous functioning of a body corporate so that it is not paralyzed on becoming an inter-State body corporate due to reorganisation of the erstwhile State of Punjab“.

Moreover, it was held that the 1966 Act does not bar the State Legislature to legislate on the fields of its legislative competence falling under List II or even in List III of the Seventh Schedule, subject to the limitations.

The Court concerning the third question observed that the decision of Union of India v. Rajendra N. Shah, 2021 SCC OnLine SC 474 on which primary reliance is placed by the petitioner, is not applicable to the facts of the present case though it deals with Entry 44 of List I and Entry 32 of List II., as the Haryana Act does not have any extra-territorial jurisdiction, that it is not applicable to more than one State. The reorganisation has rendered the Shiromani Gurdwara Prabandhak Committee (SGPC) as an inter-State body corporate but the legislative power to legislate about incorporation of the Corporations would be within the jurisdiction of the Haryana State Legislature. Further Entry 32 deals with unincorporated trading, literary, scientific, religious and other societies and associations, for which the competent legislature is the State and in terms of Entry 44 of List I, the Parliament will have jurisdiction only if the SGPC under the 1925 Act continues to be an inter-State entity.

Thus, the Court observed that the jurisdiction of the successor States either to repeal, modify or enact a new law has not been restricted by the 1966 Act, though it is a special law within the meaning of Articles 2, 3 and 4 of the Constitution. Further, the SGPC became inter-State body corporate not because of Entry 44 List I but because of reorganisation of the territories of the erstwhile State of Punjab. Therefore, it was held that Entry 44 would have no applicability in respect of legislative competence of the State of Haryana to enact the Haryana Act.

It was further held that “the 1966 Act as well as the 1957 Act confer power on the Central Government for smooth transition of new States coming into existence because of the reorganization. There is no provision in the 1966 Act which confers legislative power upon the Parliament in respect of the subjects over which the State has legislative competence in terms of List II. Therefore, the transitional provisions i.e., the 1966 Act or the 1957 Act do not impinge upon the legislative competence of the State legislature to enact a law on the subjects mentioned in List II”

The Court concerning question no. 4, observed that the said question does not arise for consideration as the impugned Haryana Act does not fall in Entry 28 of List III of the Seventh Schedule, further, the assent of the President would be necessary if there is an existing statute, and the State law is contrary to some of the provisions of Central law. Moreover, the Haryana Committee is in respect of religious purpose, but the prime intention is of an incorporation of a juristic entity to manage the affairs of the Sikhs in the State. Thus, Entry 32 is wide enough to include incorporation of such statutory entity. Further, even if it is assumed that the Haryana Act is in furtherance of Entry 28 of List III, the same cannot be said to be void as it has not been kept reserved for the assent of the President.

It was also observed that the 1925 Act was originally an intra-State legislation enacted by the State legislature and subsequently became an inter-State body only by virtue of the 1966 Act, but the power the State legislature to legislate has not been affected in any manner, therefore, the State would have power to legislate both under Entry 28 of List III and Entry 32 of List II because the 1925 Act is not an inter-State body corporate in respect of which the Parliament incorporated such Board.

The Court concerning question no.1, has observed that it was not disputed that the Haryana Act is like the 1925 Act having similar provisions of constituting a committee to manage the affairs under the Act and the Haryana Committee is the Committee constituted under Section 3 of the Haryana Act for the management and control of the Gurdwaras and Gurdwara properties within the State of Haryana. Further, the Gurdwara property in terms of Section 2(f) of the Haryana Act means “all movable and immovable properties of a Gurdwara or any institution which, immediately before the appointed day, vested or was kept in deposit in the name of any Board, Trust, Committee, Gurdwara Management or was being regulated under the provisions of the 1925 Act”.

Moreover, the members of the Committee must be elected from the eligible voters who are Amritdhari Sikh, a Sikh, and who is eighteen years of age, but not a Patit Sikh and is not an insolvent, mentally retarded or an insane person. The co-option is from the members of the community alone. Therefore, the affairs of the religious minority in the State i.e., Sikhs is left in the hands of the Sikhs alone in the same manner as was under the 1925 Act.

Further, the Haryana Act also provides for Haryana Sikh Gurdwara Judicial Commission in the same manner as is provided under the 1925 Act and the affairs of the Gurdwara are again required to be managed by the local Gurdwara Committee. Since the affairs of the Sikh minority in the State are to be managed by the Sikhs alone, therefore, it cannot be said to be violative of any of the fundamental rights conferred under Articles 25 and 26 of the Constitution. 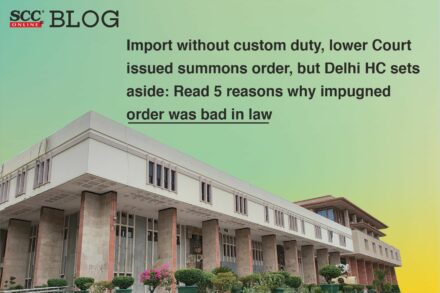