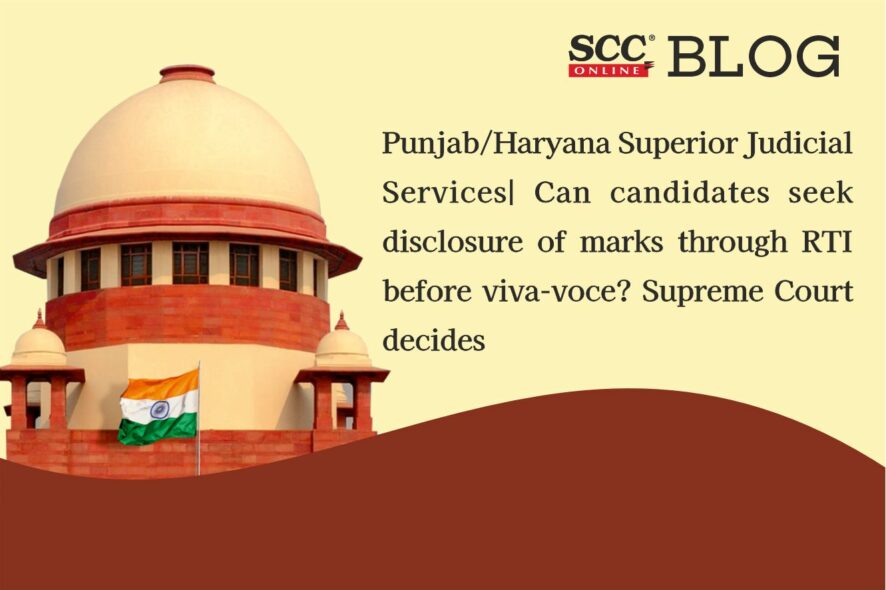 Supreme Court: In a case challenging the result of direct recruitment for Punjab/Haryana Superior Judicial Service, the Division Bench of Ajay Rastogi* and C.T. Ravikumar, JJ., reversed the impugned order of the Punjab and Haryana High Court rejecting the challenge to the selection process.

The Court held that the discrepancy regarding incomplete question paper could not be an inadvertent human error and that somebody must be held responsible for it. However, considering that the exam was conducted after 4-5 years, the Court opined that a fresh selection process could not be initiated, and the endeavour of the Court should always be to salvage the selection as much as possible.

All three objections raised by the appellant were repelled by the High Court at the motion stage, without calling for a written response from the respondents. Aggrieved thereby, the appellant had challenged the impugned order of the High Court by contending that the process adopted by the respondents was neither transparent nor fair and the written examination may be cancelled or at least the Paper V may be cancelled and be conducted afresh; only thereafter the merit list be declared of the candidates who qualified the main examination.

With regard to the objection about Paper VI (General Knowledge), the Court observed that all instructions were made available to the candidates specifically indicated on the overleaf of the question paper and all the candidates had a common level playing field. Hence, in the absence of any material on record in rebuttal, the allegation was not sustainable and deserved to be rejected.

However, the Court added that to keep transparency in the process of holding examination, particularly in such cases where there is a multiple-choice question paper, it is always advisable that there shall be an OMR so that the question paper can be retained by each of the participants and after the examination is held, and a provisional answer key is to be uploaded inviting objections from the candidates and after collating such objections, the same be placed before a subject expert committee and the report of the committee shall be examined by the recruiting authority and thereafter the final answer key is to be uploaded.

Non-disclosure of Marks under RTI Act

So far as the marks of the written examination not being supplied to the appellant under the Right to Information Act, 2005 was concerned, the Court opined that as long as the process is not complete, the marks of the written examination are not to be uploaded or made available to the candidates and if it is being permitted, that will not be in the interest of the applicants. The Court said,

“The disclosure of the marks in the main examination before it is finalised and the viva-voce is conducted would be against the principles of transparency, rather it will invite criticism of bias or favouritism.“

On the contention that only four questions were there in the original paper and question no. 4 of 40 marks was handed over to the candidates later on, the Court opined that the same could not be an inadvertent human error as being projected by the respondents. Calling it a serious lapse on the part of the recruiting authority, the Court held that somebody must be held responsible for it and such kinds of lapses certainly cannot be countenanced by the Court.

However, noticing that there was no objection in reference to the four questions (nos. 1, 2, 3, and 5) of Paper V (Criminal Law), the Court opined that it would be just to let the respondents evaluate question nos. 1, 2, 3 and 5 of Paper V (Criminal Law) of 160 marks and exclude the question no.4 which was supplemented at a later stage of 40 marks while evaluating the marks secured by the candidates in Paper V. The Court expressed,

“At this stage, the Court cannot be oblivious of the fact that the Punjab/Haryana Superior Judicial Service Examination, 2019 has been held after 4-5 years and since the fate of the examination 2019 is still sub-judice in this Court, fresh selection process could not have been initiated and if this irregularity pointed out can be possibly eliminated from the process of selection, particularly in the written examination, the endeavour of the Court should always be to salvage the selection as possible.“

In the light of above, the appeal was allowed and the impugned order of the High Court was set aside. Additionally, the Court directed that the result of the intervenor (Aashish Saldi), who had participated as against 10% quota in-service officer under Rule 7(3)(b) of the Punjab Superior Judicial Services Rules, 2007 and had no lis with the present process, be declared and further action may be taken in accordance with Rules, 2007.

Counsel for the Appellant: Deepkaran Dalal;

Counsel for the Respondent: Abhimanyu Tewari;

Children less than 12 years of age are “asexual” and normally take time to recognize that disguised love, affection or warmth by perpetrator is sinful: Tis Hazari Courts, Delhi