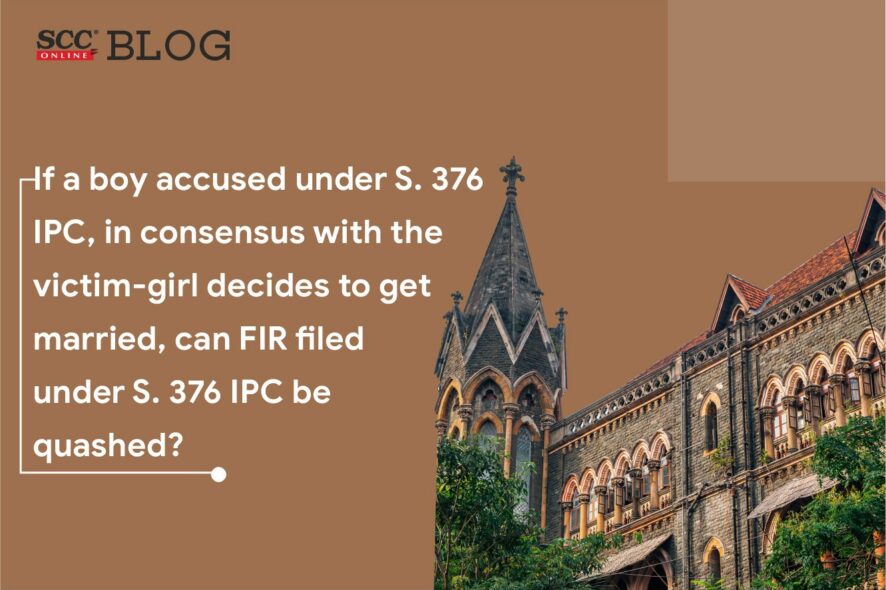 Bombay High Court: The Division Bench of Prasanna B. Varale and S.M. Modak, JJ., quashed an FIR filed for an offence under Section 376 of the Penal Code, 1860 and Section 4 of the POCSO Act, on noting that the dispute was settled and the girl and boy wanted to get married.

In the present matter, the applicant was accused of an offence registered under Section 376 of the Penal Code, 1860 and under Section 4 of the Protection of Children from Sexual Offences Act (POCSO Act).

The above-said offence was registered on the complaint of the father of the victim-girl. He filed the complaint about sexual abuse and sexual harassment of her minor daughter; hence the applicant was arrested, and charge-sheet was also filed.

The dispute was later settled, during the pendency of the prosecution.

High Court on reading the affidavit filed by the victim-girl found that the applicant and the victim were in love with each other and now they decided to marry after settling in life in their respective careers.

The girl’s parents had also filed affidavits and gave an explanation for misunderstanding while lodging the FIR. Further, they added that they have accepted the friendship between their daughter and the appellant. Though the Court did not accept the said explanation.

High Court quashed the FIR for the reasons that both agreed to marry, and the no-objection given by the victim-girl.

Bench added that, when the applicant was in the Court, he was asked about his readiness to marry the victim-girl, and he gave the undertaking to marry her.

Adv. Datta Mane, for the Applicant.

Death due to attack by wild animal is violative of Article 21; Bombay High Court directs compensation of 10 lakhs to the wife of the deceased