Kerala High Court: The Division Bench of A.Muhamed Mustaque and Sophy Thomas set aside the findings of Family Court wherein it had held rejected to grant divorce holding that providing maintenance is sufficient for husband to meet marital obligations. Opining that unequal treatment between wives is sufficient ground to dissolve marriage under muslim law, the Bench remarked,

“Refusal to cohabit and perform the marital obligations with the previous wife is tantamount to the violation of the Quranic injunctions which commands equal treatment of the wives if the husband contracts more than one marriage.”

The parties married on 04-08-1991 and 3 children were born from the wedlock. The parties were Muslims and they married in accordance with the personal law applicable to them. However, after moving abroad, the respondent contracted another marriage with a lady namely Hajira during the subsistence of marriage with the appellant. The claim of the respondent was that he contracted second marriage as the appellant refused to have a sexual relationship with him.

The appellant-petitioner filed a divorce petition in the Family Court on enumerated grounds of the Dissolution of Muslim Marriages Act, 1939 for divorce. In the petition, the grounds under the specific head of Section 2(ii), 2(iv) and 2(viii) of the Act alone were referred. However, the pleadings in the petition indicated the ground for divorce under Section 2(viii) (f) as well.

The appellant-petitioner relied on following grounds, as stipulated under Act, 1939 for seeking divorce:

Section 2(ii): “that the husband has neglected or has failed to provide for her maintenance for a period of two years.”

Section 2(iv): “that the husband has failed to perform, without reasonable cause, his marital obligations for a period of three years.”

Section 2(viii) (a) and (f): “that the husband treats her with cruelty, that is to say- (a) habitually assaults her or makes her life miserable by cruelty of conduct even if such conduct does not amount to physical ill-treatment, or (f) if he has more wives than one, does not treat her equitably in accordance with the injunctions of the Qoran.”

Erroneous Findings of the Family Court

The Family Court formulated the points for consideration on three different heads except with reference to sub clause (f). It had come out in the evidence that the respondent used to provide maintenance. The appellant had a case that that amount was in fact the money collected from abroad due to the intervention of local politicians to meet the marriage expenses of the daughter and not the maintenance provided, however, there was no evidence to that effect.

“The Family Court carried on an assumption that providing maintenance would be sufficient to prove that the husband performed marital obligations. This finding, according to us, is erroneous and cannot stand the scrutiny of the law.”

The appellant had stated in the petition that from 21-02-2014 onwards, the respondent husband stopped visiting her. On the other hand, according to the respondent, he was forced to marry another lady for the reason that the appellant failed to co-operate with him on his physical needs. Rejecting the contention of the respondent, the Bench stated,

“We are not persuaded to believe the version of the respondent in this regard. Three children were born in the wedlock. Two of them got married. Absolutely, there was no evidence to show that the respondent was willing to cohabit with the appellant. That means, he failed to perform the marital obligations.”

Further observing that the couple was living separately at least for a period of five years prior to filing the petition, the Bench opined that the appellant made out a ground for divorce under Section 2(iv) of the Act. The next ground was under Section 2(viii) (a) of the Act, which referred to the physical and mental cruelty of the wife.

We noted that the parties are living separately for more than five years before the institution of the petition. That would show that there was no cohabitation. In such circumstances, we will not be able to justify the case put forward by the appellant-wife in regard to the physical or mental cruelty.

Unequal Treatment of Wives as a ground for Divorce

The next ground was under Section 2(viii) (f) of the Act. Though in the petition, this provision had not been specifically mentioned, the Bench opined that mere omission to quote a statutory provision would not disentitle the claim for divorce on that ground if there were sufficient averments in the petition. The Bench added,

“If there exists a marriage with another lady during the subsistence of the previous marriage, the burden is on the husband to prove that he had treated both wives equitably in accordance with the injunctions of Quran. Staying away from the first wife for five years itself would show that he had not treated them equally.”

The respondent had no case that he lived with the appellant after 2014. Hence, the Bench held that the refusal to cohabit and perform the marital obligations with the previous wife is tantamount to the violation of the Quranic injunctions which commands equal treatment of the wives if the husband contracts more than one marriage.

In the light of above, the Bench held that the appellant-wife was entitled to get a decree of divorce. Accordingly, the appeal was allowed and impugned judgment was set aside. The Bench declared that the marriage between the appellant and the respondent stood dissolved. [Ramla v. Abdul Rahuf C.K., Mat.Appeal No.431 of 2021, decided on 01-12-2021]

For the Appellant: C.Ijlal and Ummul Fida, Advocates

For the Respondent: T.P.Sajid and Shifa Latheef, Advocates 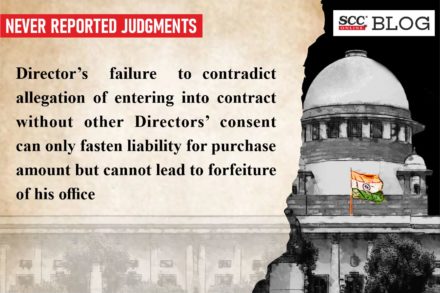