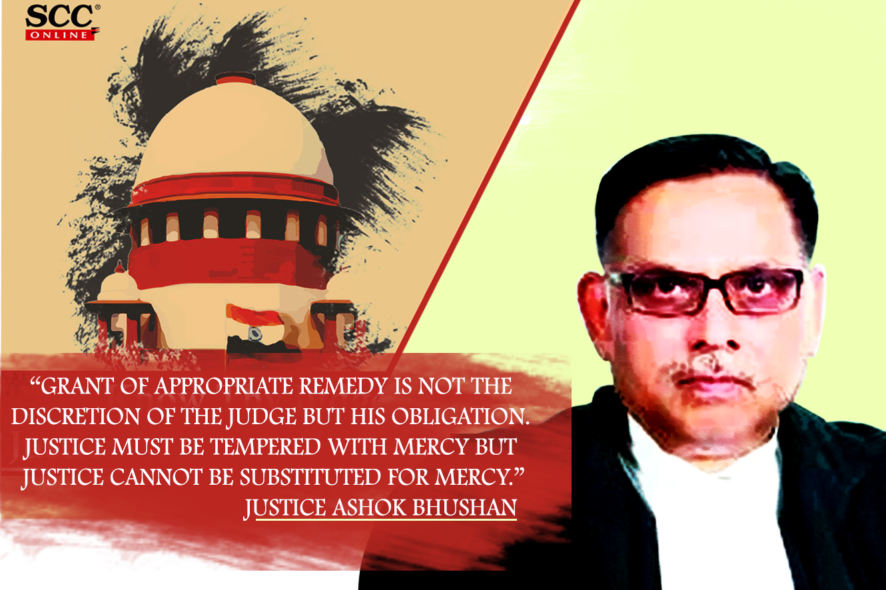 “Grant of appropriate remedy is not the discretion of the judge but his obligation.

Justice must be tempered with mercy but justice cannot be substituted for mercy.”[1]

Born on 05-07-1956 in Jaunpur, Uttar Pradesh, Justice Bhushan graduated in Arts in the year 1975, obtained Law Degree in 1st Division from the Allahabad University in the year 1979.

He enrolled as an Advocate with the Bar Council of Uttar Pradesh on 06-04-1979 and started practice on Civil and Original side at Allahabad High Court till the elevation to the Bench.

He worked as Standing Counsel of Allahabad University, State Mineral Development Corporation Limited and several Municipal Boards, Banks & Education Institutions. He was elevated as permanent Judge of the Allahabad High Court on 24-04-2001.

It would be an understatement that Justice Bhushan contributed to the legal field and to the country. He is known to have given various such judgments that would set major precedents for the future. The Supreme Court has acted as the guardian of the country in the ongoing pandemic and Justice Bhushan has been the most actively involved judge in dealing with the matters of public interest an importance in relation to Covid-19.

Attorney General for India KK Venugopal, the first person to speak at the farewell reference, said it was a “sad day” for the Supreme Court, he said that Justice Ashok Bhushan has issued directions to mitigate the sufferings of people during the pandemic. Solicitor General of India Tushar Mehta said “The decorum maintained by his lordship in Court, the respect shown for members of the Bar and concern for common man are exemplary. His Lordship will always be missed by the Bar and citizens of this country.”

“Justice Bhushan reflected a “welfarist and humanistic approach” in his judgments.”[2]

After the Court was approached seeking direction to the Government to provide notified ex-gratia monitory compensation of Rs.4,00,000/- to the families of deceased who succumbed to COVID-19, the Division Bench of Ashok Bhushan and MR Shah, JJ. had issued directions asking the National Disaster Management Authority to make uniform guidelines for ex gratia assistance on account of loss of life to the family members of the persons who died due to Covid-19.

IN RE: Problems And Miseries of Migrant Labourers, 2021 SCC OnLine SC 441 [One Nation One ration card]

Migrant workers had been exposed to financial and other forms of hardships due to their limited access and claim to the welfare resources offered by the States/Union Territories. The migrant labourers are particularly vulnerable to the economic regression. Division Bench of Ashok Bhushan and MR Shah, JJ had issued extensive directions to ensure the welfare of the migrant labourers who have been severely affected due to the outbreak of the COVID-19 pandemic. It was reminded that,

“To provide food security to impoverished persons is the bounden duty of all States and Governments.”

Apart from directing all the States to implement “One nation, One Ration card” Scheme by July 31st, the Central Government has also been directed to develop the Portal in consultation with National Informatics Centre (NIC) for registration of the unorganized labourers/migrant workers. The registration process by all means has to commence by July 31st.

The Full Bench of Ashok Bhushan, S.A. Nazeer, L. Nageswara Rao, Hemant Gupta and S. Ravindra Bhat, JJ had quashed the much in debate Maratha Reservation and has held that the Maharashtra State Reservation (of seats for admission in educational institutions in the State and for appointments in the public services and posts under the State) for Socially and Educationally Backward Classes (SEBC) Act, 2018 [ 2018 Act] as amended in 2019 granting 12% and 13% reservation for Maratha community in addition to 50% social reservation is not covered by exceptional circumstances as contemplated by Constitution Bench in Indra Sawhneys case.

In a case relating to brutal custodial violence dating back to 1985, the bench of Ashok Bhushan and Ajay Rastogi, JJ. had held that,

“The custodial violence on the deceased which led to the death is abhorrent and not acceptable in the civilized society. The offence committed by the accused is crime not against the deceased alone but was against humanity and clear violations of rights guaranteed under Article 21 of the Constitution.”

The Full Bench of Ashok Bhushan, R. Subhash Reddy and MR Shah, JJ had upheld the constitutionality of imposition of GST on lotteries, betting and gambling.

IN RE: The Proper Treatment Of COVID 19 Patients AND Dignified Handling of Dead Bodies in the Hospitals etc., (2021) 2 SCC 519

On 27-11-2020, the Court took suo motu cognizance of the incident which happened in Rajkot, Gujarat on 26-11–2020 resulting in death of COVID patients in the COVID Hospital. The Court also took notice of earlier incidents of fire in Covid Hospitals. Concerned with the COVID-19 pandemic spreading like a wild fire despite Guidelines and SOPs in place, the 3-judge bench of Ashok Bhushan, R. Subhash Reddy and MR Shah, JJ has said that a strict and stern action should be taken against those who are violating the Guidelines and SOPs, whoever he may be and whatever position the violator is occupying.

The Full Bench of Ashok Bhushan. R. Subhash Reddy and MR shah, JJ had held that an unmarried Hindu daughter can claim maintenance from her father till she is married relying on Section 20(3) of the Hindu Adoptions & Maintenance Act, 1956, provided she pleads and proves that she is unable to maintain herself, for enforcement of which right her application/suit has to be under Section 20 of Act, 1956.

The 3-Judge Bench of Ashok Bhushan, R. Subhash Reddy and M.R. Shah, JJ., held that the Allahabad High Court had committed an error in quashing the appointment of the appellant as Assistant Professor and reverting him to the post of Lecturer as well as in quashing the order of the Chancellor. The Bench stated,

“When the appointment of the appellant was not challenged in reasonable time as per the provisions of the Act, 2002, it is not in the ends of justice to permit respondent 4 to challenge such appointment in the High Court in writ petition for the first time, after more than four years of the appointment.”

The three-judge bench comprising Ashok Bhushan, R. Subhash Reddy and M.R. Shah, JJ., had addressed the petition questioning the closure of the Anganwadi Centres across the country. The Bench said,

“Government has a constitutional obligation to preserve human life.”

In a case where the Bombay High Court declared that tribe “Gowari” is a part of Scheduled Tribe “Gond Gowari” thereby leading to several people taking benefit of Scheduled Tribes for admissions and employment, the bench of Ashok Bhushan, R. Subhash Reddy and MR Shah, JJ had held that

“the High Court could not have entertained the claim or looked into the evidences to find out and decide that tribe “Gowari” is part of Scheduled Tribe “Gond Gowari”, which is included in the Constitution (Scheduled Tribes) Order, 1950.”

Justice Bhushan has been a part of the historical and much awaited judgment of the Ayodhya Temple dispute. The Full Bench of Ranjan Gogoi, CJ, S.A. Bobde, Dr. D.Y. Chandrachud, Ashok Bhushan and S. Abdul Nazeer, JJ., unanimously put an end to the Ayodhya Title dispute and held that the disputed land was to be given to Trust for construction of Ram Mandir. In an effort to balance the interest of both the parties involved, the Court directed  that a suitable plot of 5 acres must be granted to Sunni Waqf Board to set up a Mosque. The 1045 pages long ‘unanimous’ verdict was silent on who wrote it.

The much famous Ayodhya verdict which is known to be a unanimous judgment, but also mentions that 1 judge out of the Bench had written a separate concurring piece however the identity of that judge was not revealed. No points for guessing that it was written by Justice Bhushan i.e. starting from para 1248.[3]

Justice Bhushan even after being involved in such controversial and important judgments has never been a part of any controversy himself, known for his constant smile and patient hearing of matters, has always been and continue to be a source of inspiration for the legal fraternity. 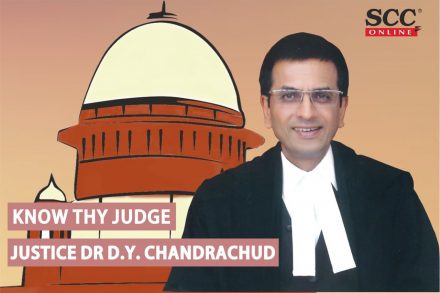 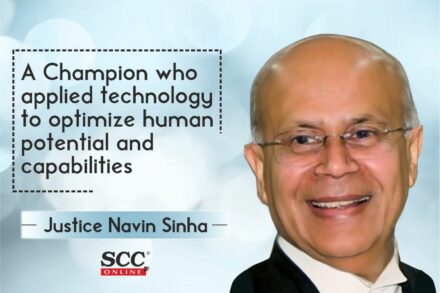 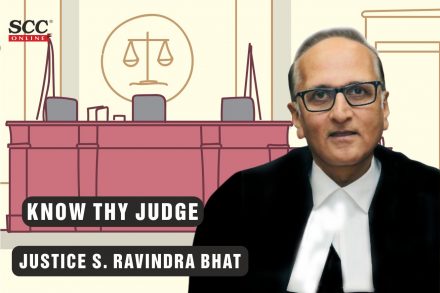