India’s oxygen needs shot up exponentially (over 10x) during the second wave of the Covid-19 pandemic in April 2021, mandating significant changes in the regulation of manufacture, import and distribution of medical oxygen. Consequently, notifications were issued by various departments of the Government around its production, supply, import, usage, taxation and pricing.

Industrial usage of oxygen was restricted, tax exemptions were issued, import restrictions were eased. In addition, measures were put in place to curb hoarding of supplies and to monitor pricing.

An average Covid-19 patient is estimated to require 2 to 4 litres of oxygen per minute, while patients requiring high flow nasal cannula (HFNC) support may need more than 60 litres of oxygen per minute. During the crisis of scarcity of oxygen, oxygen cylinders and concentrators at the peak of the second wave, various Indian corporates came forward to support their employees. From Amazon to Paytm, firm arranged for medical oxygen, oxygen concentrators and other related supplies to fight the oxygen crisis in the country.

In light of the 3rd wave that is expected to hit the country later this year, the following FAQs sum up all the regulatory information a corporate employer may wish to know in order to support its employees in relation to oxygen-related matters.

What is medical oxygen?

When we talk about oxygen and oxygen scarcity with respect to Covid-19, we are referring to medical oxygen as opposed to industrial oxygen. Medical oxygen means high purity oxygen which is put to use in medical treatments and is developed so that it can be used in the human body. Considering the high level of purity that is to be maintained in medical oxygen, the cylinders which contain this oxygen have to be protected from any sort of contamination that could mix with this oxygen and deteriorate it. Medical oxygen once manufactured, is transported and made available either in cylinders in gaseous form or in cryogenic tanks in liquid form. One requires a medical prescription to procure medical oxygen.

What exactly are oxygen cylinders as opposed to oxygen concentrators?

Oxygen cylinders are portable tanks of oxygen that require continuous refills and are most useful where central refilling and transportation infrastructure are reliable and affordable.

Oxygen concentrators are devices that take oxygen from the room, concentrate it for therapeutic use, and remove other naturally occurring gases. They are less portable than oxygen cylinders, require consistent supply of electricity and routine maintenance but are less expensive and require no refilling.

The Supreme Court of India, on 13-4-2020, in State of A.P. v. Linde India Ltd.[1], classified “medical oxygen” as a “drug”. This classification entails that the manufacture, import, sale, quality check and so on of medical oxygen would be regulated by the Drugs and Cosmetics Act, 1940 along with the Drugs and Cosmetics Rules, 1945. The relevant regulations provide the procedure for obtaining licences, registration certificates from the Central Drug Standard Control Organisation (CDSCO) for manufacture, import, and sale of medical oxygen in India and also for maintaining a check on the quality standards for the medical oxygen produced, imported, or distributed in the country.

Further, the transportation, ownership, storage, filling/refilling, and quality control of oxygen cylinders, generators, tanks and canisters are regulated by the Gas Cylinders Rules, 2016 via the Petroleum and Explosives Safety Organisation (PESO). Declarations and packaging of these cylinders are governed by the Legal Metrology Department under the Legal Metrology (Packaged Commodities) Rules, 2011.

Oxygen concentrators are categorised as “medical devices” and are regulated by the Medical Devices Rules, 2017 framed under the Drugs and Cosmetics Act, 1940. The said Rules regulate the licensing and registration for manufacture, import, sale of medical devices, and the comprehensive quality requirements for medical devices in India.

Are prices of medical oxygen, oxygen cylinders, and oxygen concentrators currently regulated in the country?

Oxygen inhalation (medicinal gas) is a scheduled formulation, covered under the National List of Essential Medicines, 2011 (NLEM) which constitutes Schedule I of the Drugs (Prices Control) Order, 2013 and is subject to a price cap.

Oxygen concentrators are classified as medical devices. On 31-3-2020, the NPPA issued an order stating that “medical devices” would be reclassified as “drugs”, to be regulated under the Drugs (Prices Control) Order (DPCO), 2013 read with the Essential Commodities Act, 1955. Thereafter, the MRP of the medical devices would be monitored, to ensure that no manufacturer/importer increased the MRP of a drug by more than 10% of the MRP during one year. Consequently, on 29-6-2020  the NPPA issued an office memorandum (OM) to monitor MRPs of pulse oximeters and oxygen concentrators. A notice was issued to all importers/manufacturers to submit MRP details under the DPCO, 2013. The OM also reiterated that the price of medical devices cannot be increased more than 10% in a year.

Further, on 4-6-2021, the NPPA issued a notification capping the trade margin for concentrators at 70%  applicable up to November 30, subject to review. While the hike in prices is being monitored, the two medical devices have not yet been declared as “essential commodities” under the Essential Commodities Act, 1955.

Can employers in India purchase and store medical oxygen/oxygen concentrators?

While there are no restrictions on purchasing oxygen cylinders/concentrators for personal use, storage of more than 200 oxygen cylinders requires a licence under the Gas Cylinders Rules, 2016 from the Petroleum and Explosives Safety Organisation.

Can employers import oxygen concentrators/cylinders into the country?

However, the Legal Metrology Division of the Ministry of Consumer Affairs, Food and Public Distribution via a notification on 28-4-2021 has permitted import of devices like oxygen cylinders, concentrators, generators for three months (starting 28th April) subject to a condition that importers shall make required declarations under the Legal Metrology (Packaged Commodities) Rules, 2011 after custom clearance – which includes mandatory declarations by labels, stamps, stickers or online prints.

It is not clear if import licences and registration are still necessary for the above-mentioned period of three months.

Additionally, import of concentrators including flow meters and regulators, medical oxygen, generators, canisters, tanks, cylinders and any other devices which can generate oxygen are exempted from basic customs duty by a notification issued by the Ministry of Finance, which remains in force up to and inclusive of 31-7-2021.

Can employers write off the expenses on arranging medical oxygen for its employees under CSR?

The Companies Act, 2013 mandates businesses with net worth of Rs 500 crores or more, or annual revenues of at least Rs 1000 crores, or net profit of at least Rs 5 crores, to spend 2% of their average net profits of the preceding three years on Corporate Social Responsibility (CSR) activities. The Ministry of Corporate Affairs, on 5-5-2021 has clarified that corporate expense on setting up oxygen plants and other medical infrastructure towards combating Covid-19 will be counted as eligible corporate social responsibility activity.

How are they taxed?

The import of medical oxygen and oxygen concentrators, have been exempted from payment of basic customs duty. On 1-5-2021, the Ministry of Finance issued a notification that reduced the rate of integrated goods and services tax (IGST) on import of oxygen concentrators for personal use down to 12% from the erstwhile 28%. Further on the 3rd of May, payment of IGST was completely exempted on the import of said essential medicines and medical devices by a State or State authorised entity for further free distribution to the needy. It is to be noted that such complete waiver of IGST is not available for private entities, who import medical oxygen/device, even if it is later meant for free distribution.

Earlier, on 30-4-2021 the Government (Ministry of Commerce) had also revised the foreign trade policy to allow import of oxygen concentrators as “gifts” through post, courier or e-commerce portals for personal use – essentially waiving the requirement of any licence to the importers and not meaning an exemption from any duty (IGST, etc.) as has been widely misinterpreted.

Even after a considerable reduction in IGST rates for the import of oxygen concentrators for personal use, (12% as opposed to the earlier rate of 28%) a plea for complete waiver is currently being contended in the Supreme Court. Delhi High Court had earlier mandated a waiver for concentrators imported for personal use just as currently provided for import by States (via the notification on May 1). This order has however been stayed by the Supreme Court and a fresh report by the Government upon review of the tax situation is due to be filed this week in court, which could potentially make changes to the current tax regime on import of medical oxygen/oxygen concentrators.

The importance of continuous and reliable supply of medical oxygen is a lesson learnt the hard way for the people of this country. Corporate firms are doing the country a service by coming forward to provide a solution to the recurring oxygen crisis, but the legal issues involved are many and fluid, and it is important for them to acquaint themselves with the relevant regulations for the procurement of medical oxygen and related medical devices.

While the Government has relaxed the regulations around the procurement of concentrators and oxygen cylinders, corporate firms must keep in mind that ease of import restrictions and tax concessions have led to widespread quality issues in concentrators and the medical oxygen available. Thus, while procuring the same, quality consideration must be kept in mind by the firms concerned.

† Shantanu is the founder of Ronin Legal, a legal boutique with a focus on pharma, biologics and healthcare. He can be reached at shantanu@roninlegal.in and on Twitter [@LegalRonin].

Sampreetha Kumar and Anam Chowdhary’s research has been acknowledged by the Author. 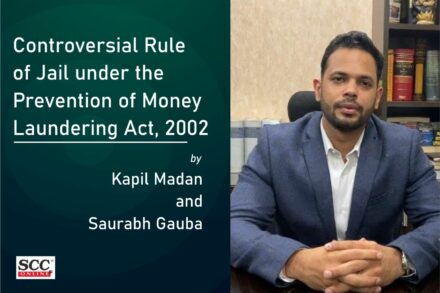 Controversial Rule of Jail under the Prevention of Money Laundering Act, 2002