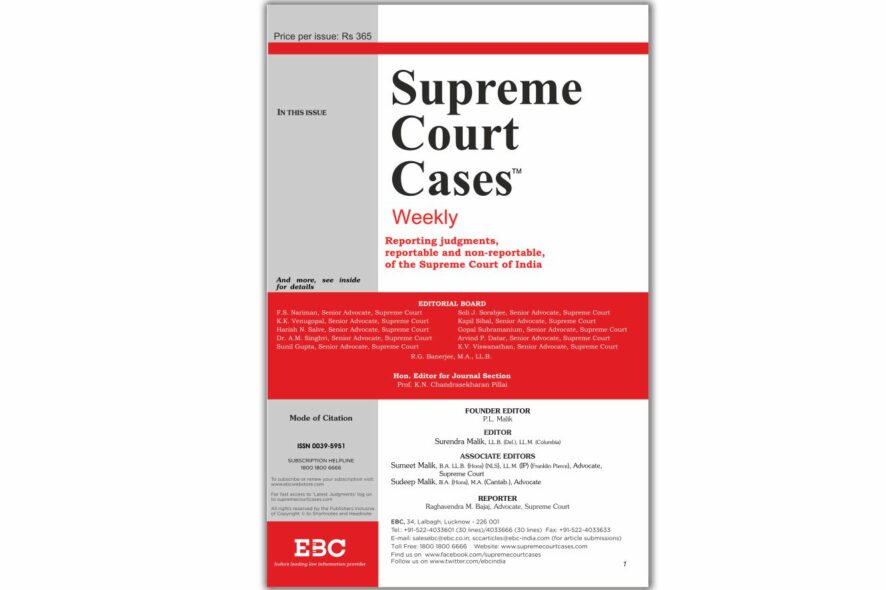 In this part read a very interesting article Existence and Mortgageability of Equitable Estates in Immovable Property in Indian Law – I, (2021) 3 SCC J-25 by Mr Sudeep Malik, Associate Editor, Supreme Court Cases. The author discusses the question “Whether a property can be equitably mortgaged by depositing documents which may not be title deeds or registered document of title? “ which was referred to 3-Judge Bench of Supreme Court in Syndicate Bank v. APIIC, (2021) 3 SCC 736.

Civil Procedure Code, 1908 — Or. 23 R. 3 and Ss. 151 and 96(3) — Consent decree — Modification or alteration of, by court — When permissible: It is settled law that consent decrees are intended to create estoppels by judgment against the parties, thereby putting an end to further litigation between the parties and it would be slow to unilaterally interfere in, modify, substitute or modulate the terms of a consent decree, unless it is done with the revised consent of all the parties thereto. However, this formulation is far from absolute and does not apply as a blanket rule in all cases and a consent decree would not serve as an estoppel, where the compromise was vitiated by fraud, misrepresentation, or mistake. Court in the exercise of its inherent powers may also unilaterally rectify a consent decree suffering from clerical or arithmetical errors, so as to make it conform with the terms of the compromise. [Compack Enterprises (India) (P) Ltd. v. Beant Singh, (2021) 3 SCC 702]

Constitution of India — Art. 21 r/w Pt. III — Liberty guaranteed by Pt. III — Scope of: Liberty guaranteed by Pt. III of the Constitution covers within its protective ambit not only due procedure and fairness but also access to justice and a speedy trial. When a timely trial would not be possible and the accused has suffered incarceration for a significant period of time, the courts would ordinarily be obligated to enlarge accused on bail regardless of statutory restrictions imposed on right to bail by provisions like S. 43-D(5) of the UAPA. [Union of India v. K.A. Najeeb, (2021) 3 SCC 713]

Consumer Protection Act, 1986 — S. 13(2)(a): Limitation period for filing response or written statement in reply to complaint, by respondent/opposite party, mandatorily cannot be extended beyond prescribed period of 45 days (i.e. period of 30 days along with discretionary extension of time up to 15 days) by Consumer Fora. [Daddy’s Builders (P) Ltd. v. Manisha Bhargava, (2021) 3 SCC 669]

Consumer Protection Act, 1986 — Ss. 13(2)(a), 18 and 22 — Power of Consumer Fora to extend time for filing written statement/reply to complaint beyond stipulated period of 45 days: In this case as the matter was pending decision of larger Bench on the said issue, direction issued that it would be open to Consumer Fora concerned to accept written statement filed beyond stipulated time of 45 days in an appropriate case, on suitable terms, including payment of costs, and to proceed with matter. [Reliance General Insurance Co. Ltd. v. Mampee Timbers and Hardwares (P) Ltd., (2021) 3 SCC 673]

Courts, Tribunals and Judiciary — Judicial Process — Recusal by Judge: Recusal by Judge is not warranted when on an earlier occasion first application filed by applicant for the very same relief as in present application was dismissed by the Bench in which one of the Judges of present Bench was present on the earlier occasion as well. Litigant cannot be permitted to browbeat Court by seeking Bench of its choice. [Neelam Manmohan Attavar v. Manmohan Attavar, (2021) 3 SCC 727]

Criminal Procedure Code, 1973 — S. 439 r/w S. 41 — Interim bail: In this case, there was absence of compliance with procedure contained in S. 41 CrPC before arresting the petitioner. Same taken as factor for directing release of petitioner, a stand-up comedian, on ad interim bail by staying impugned judgment of High Court by which it declined bail to the petitioner involved in offences under Ss. 295-A, 298, 269 and 188/34 IPC, wherein complainant had alleged that jokes made by petitioner had outraged religious sentiments of the complainant and those similarly situated. [Munawar v. State of M.P., (2021) 3 SCC 712]

Criminal Procedure Code, 1973 — S. 482 — Quashment of proceedings under Ss. 419, 420, 323, 504 and 506 IPC: It was held that this case was fit for High Court to exercise jurisdiction under S. 482 CrPC and to quash criminal proceedings against accused under Ss. 419 and 420 IPC as it could not be said that averments in FIR and allegations in complaint against appellant constituted offences thereunder. But, regarding proceedings under Ss. 323, 504 and 506 IPC, High Court has rightly not quashed such proceedings, which shall be continued as per charge-sheet and shall be disposed of in accordance with law, on their own merits. [Archana Rana v. State of U.P., (2021) 3 SCC 751]

Existence Of Arbitration Agreement: This article seeks to examine the scope and purport of Section 7(4)(c) of the Arbitration and Conciliation Act, 1996 which stipulates that an arbitration agreement is deemed to be in writing if it is contained in an exchange of statement of claim and defence wherein the existence of arbitration agreement is alleged by one party and not denied by the other. In order to accomplish the aforesaid objective, the authors first examined the legislative history of Section 7 of the Act resulting in its enactment. Thereafter, the authors briefly examined the divergent views expressed by the High Courts and the Supreme Court of India on the scope and meaning of Section 7(4)(c) of the Act. The authors concluded by summarising their views on the true scope and purport of the said sub-section. Section 7(4)(C) Of The Arbitration And Conciliation Act, 1996: Acquiesence By Silence? By M. Dhyan Chinnappa & Rohan Tigadi, [(2021) 3 SCC (J-32)]

Hindu Marriage Act, 1955 — S. 13(1)(i-a) — “Mental cruelty” — Grant of divorce on ground of — Factors to be considered: For considering dissolution of marriage at instance of a spouse who alleges mental cruelty, result of such mental cruelty must be such that it is not possible to continue with matrimonial relationship. In other words, wronged party cannot be expected to condone such conduct and continue to live with his/her spouse. Degree of tolerance will vary from one couple to another and court will have to bear in mind background, level of education and also status of parties, in order to determine whether cruelty alleged is sufficient to justify dissolution of marriage, at instance of wronged party. [Joydeep Majumdar v. Bharti Jaiswal Majumdar, (2021) 3 SCC 742]

Land Acquisition Act, 1894 — Ss. 28-A, 4(1) and 23(1-A) — Redetermination of compensation: Claimant whose lands were acquired by a common notification, held, is entitled to enhanced compensation awarded by civil court to other landowners in same survey number. [Murali v. State of Kerala, (2021) 3 SCC 747]

Mortgage by deposit of title deeds: In this article, the author reflects upon several legal aspects relating to the issue raised before Supreme Court in Syndicate Bank v. APIIC, (2021) 3 SCC 736 regarding if a property can be equitably mortgaged by depositing documents which may not be title deeds or registered document of title. The author proposed some propositions in the matter. Those propositions are to be substantiated with statutory and case law analysis in several forthcoming articles in the SCC Journal Section by the author. Existence and Mortgageability of Equitable Estates in Immovable Property in Indian Law – I, by Sudeep Malik [(2021) 3 SCC (J-25)]

Pre-Conception and Pre-Natal Diagnostic Techniques (Prohibition of Sex Selection) Act, 1994 — Ss. 6, 23 and 27 — Offences under the 1994 Act — Bail: In this case, accused and one other were found involved in pre-natal sex determination and abortion of female foetuses at their residence, without required registration or licence under law. There was sufficient evidence to hold that there is strong prima facie case against appellant-accused herein and that she had more active role in conducting alleged illegal medical practices of sex determination and sex-selective abortion as compared to other co-accused. Therefore, it is imperative that no leniency should be granted at instant stage. Thus, order of High Court denying bail to appellant-accused, confirmed. [Rekha Sengar v. State of M.P., (2021) 3 SCC 729]

Service Law — Judiciary — Recruitment process — Notification of vacancies — Periodicity with which to be made: While harmonising R. 7(2) of the Kerala Judicial Service Rules, 1991 with Malik Mazhar Sultan (3), (2008) 17 SCC 703, held, once process of selection is annual, notification of probable or anticipated vacancies must be for the selection year. Recruitment over and above notified vacancies, not permissible. [High Court of Kerala v. Reshma A., (2021) 3 SCC 755]

Speedy resolution of arbitral disputes: In this article, the author states that while adjudicating appeals under Section 37, the Courts ought to be circumspect before condoning long delays, considering the objective of expeditious disposal of disputes under the Arbitration Act and prejudice being caused to the non-defaulting party. Appeal Under Section 37 Of The Arbitration And Conciliation Act, 1996 — To Condone Or Not To Condone Delay Beyond 120 Days, That Was The Question! By Sidharath Goyal [(2021) 3 SCC (J-56)]

Transfer of Property Act, 1882 — Ss. 58(f) & 96 and Ss. 40 Pt. II, 53-A & 54 — Mortgage by deposit of title deeds: In this case it was held that reference of the question regarding if a property can be equitably mortgaged by depositing documents which may not be title deeds or registered document of title, to present larger Bench, not required to be answered in the peculiar facts and circumstances of the case, as allotter is estopped from challenging the mortgage sale of the property in question by the mortgagee Bank, as it had itself issued the permission to create a charge on the property in question, even though the allottee had only been issued an allotment letter. [Syndicate Bank v. A.P. Industrial Infrastructure Corpn. Ltd., (2021) 3 SCC 736]