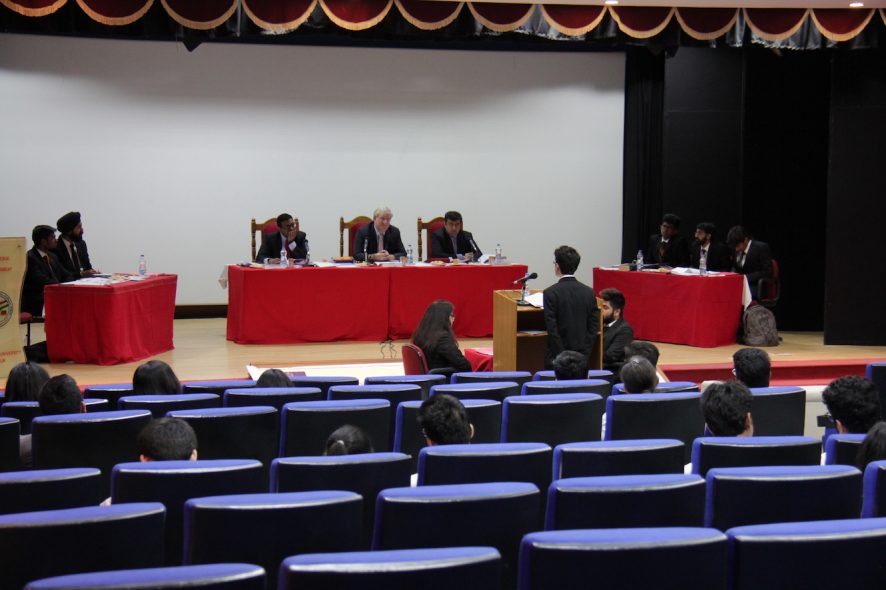 The Ninth NLU Antitrust Law Moot Court Competition has been inaugurated in the presence of Dean I.P. Massey.  The registrations and exchange of memorials between the teams was concluded while the Researchers were rallying forward with the Researcher’s Test!

The competition is now truly underway as post the Inaugural Ceremony and a great lunch the preliminary rounds are scheduled to start at 4:30 PM. This year’s Antitrust Moot is truly unique and stands out amongst all other Moots in the country with the introduction of the Octa-Final and the Reverse Octa-Final Rounds! About the new Octa-Final Rounds

The top sixteen teams from the Preliminary Rounds will proceed to the Octa Final rounds and the Reverse Octa Final Rounds. These will be carried out on the basis of power matchups. We’ll leave it to our team head, Amrita, to explain how this makes the competition even better!

“Ever been to a moot where you lost in the prelims by a close margin to the winning team? Thought your prelims with the team should have gone on to be the finals? Felt that you lost because luck did not favour you? We understand that is quite disheartening after months of hard work.

Fear not. Luck is going to have a minimal role this year at Antitrust. We bring to you the octa-final and the reverse-octa final rounds where matches are made on merit and not luck. Bring only your hard-work and determination to win the trophy.

With the first set of Octa Final rounds over, preparations are in full swing for the reverse Octa Final Rounds. Meanwhile, participants attended the 3rd Antitrust Panel Discussion, 2018.

The topic for this year’s Discussion,   was ” Competition and Innovation: Is it time for a new approach?“. The changing facets of antitrust regulation, in light of the digital economy, were discussed. The panel consisted of the following persons.

Anand Kumar Singh completed his LLM in corporate laws from the National Law University Jodhpur. He is currently an Assistant Professor at NLUJ, where he has such as Corporate Governance, and Constitutional Governance.

Anandh Venkataramani is a 2011 graduate of Symbiosis Law School, Pune. Upon graduating, he worked in the litigation team of Lakshmikumaran & Sridharan for two years. He then pursued his masters from New York University School of Law, focusing on antitrust and litigation. He passed the New York Bar and worked with judges at the New York Supreme Court and the California Court of Appeal. He subsequently joined the Competition Team at Shardul Amarchand Mangaldas, where he worked on contentious cases in the agriculture and biotech; real estate; social media; mobile app-based communication and transport, and automotive industries. He is currently practicing in the courts in Delhi.

Indrajeet Sircar, an Antitrust and International Trade lawyer, graduated from West Bengal National University of Juridical Sciences, Kolkata in 2013. Thereafter, he worked for two years as an Associate in the competition law practice at AZB & Partners where he regularly advice clients on a variety of contentious and non-contentious antitrust issues. He is currently a Consultant with the Disputes, Regulatory, Advocacy and Policy (DRAP) group at Cyril Amarchand Mangaldas.

Prateek Bhattacharya graduated from NLU Jodhpur in 2012 with a specialization in International Trade and Investment. He was thereafter awarded the Dr. Angela Merkel – Jawaharlal Nehru scholarship to pursue his LL.M. in Germany, and graduated from the Europa Institut, Saarland University . He then joined erstwhile Amarchand & Mangaldas & Suresh A Shroff & Co, and is currently a Senior Associate at Shardul Amarchand Mangaldas, New Delhi.

1:30 PM: The Reverse-Octa Final rounds are now slated to begin. The matchups with the university names shall be disclosed shortly thereafter.

The results of the Octa Final rounds are in! The teams progressing to the Quarter Final Rounds are as follows:

Best of luck to all the teams!

From the above 8 Teams, The following teams progressed to the Semi Final Rounds:

After a grueling Semi-Final Rounds, NLSIU and Sastra University were chosen to battle it out in the Final Rounds.

NLSIU Bangalore emerged victorious in the Final Round of the competition and took the crown of the winner of the 9th NLU Antitrust Law Moot Court Competition.

The award winners of the 9th NLU Antitrust Law Moot Court Competition were as follows:

With that, the competition has come to a conclusion. We hope this was an enriching experience for all the participants! A heartfelt congratulations to all the award winners from all of us here at NLU Jodhpur.

The stage is done and the teams get down to battle for the coveted trophy after two days of grilling rounds.

The Counsel manoeuvres his way through the arguments and moves on to his argument where he contends that earlier market transactions are not part of the equation.The judges counter the arguments on the basis of facts and parameters defined in cases relied upon by the Counsel. Investment can be treated as solely one for the sake for it and not as a strategic investment.

The Respondents are intently listening and noting down loopholes in the arguments.

The second speaker now addresses the Bench. He emphasizes on the Appellant’s arrangement with Tojo sticks as being a tie-in arrangement. He proceeds with the traditional approach of first defining what a relevant market is and then demonstrating adverse impact on the field.

Mr Rao. catches the second Counsel on an important on why an i-pad could not be substituted for a cathode ray television and whether could both of them together form the relevant market since they both provide private entertainment.

The Counsel insists that only the end-user of a product should be used for defining the relevant market, however the judges bring in the relevancy of other factors, such as consumer preferences.

The Counsel manages to bring the judge’s attention to the second arguments i.e. the dominance of Lutyen TV. He stresses on the fact that Lutyen was reliant on third parties(unable to operate independently) while Sandy was self-reliant. Hence, Lutyen could not possibly be dominant. The judges however, true to their nature, probe more and seem to be looking for a more analysed argument on this point.

The first speaker of the Respondents’ argues vehemently to show the application of the notification published on March 29th, 2017, although the latter still remains to be proved.  The judges’ seem very unconvinced with the counsel’s argument that Lutyeans would still have to notify the CCI despite 30 days passing from the date of the agreement. The Counsel emphasises that the date of signing should be the date from which the time period of 30 days shall be calculated. The counsel seems to be having a tough time answering the bench’s question, however he shows courage and continues on to his next submission. The bench now seem content with the next submission of the counsel, which relies upon only using the relevant portion of the turnover/assets of the company entering into a combination, rather than the entire assets/turnover of the company.

The counsel proceeds to his argument on gun-jumping provisions of the Act. Perhaps the Counsel has successfully proven his point as he his gets an extension of a minute. The second speaker argues that the a discount control mechanism put in conjunction with price fixing amounts to resale price maintenance and Lutyen is under scanner for the same. He contends that there is no need to put in any monetary penalties o the distributors.

He argues that a re sale price maintenance per se must not be construed as a violation of the Competition Act. The Counsel however perseveres to establish that there is an anti-competitive effect of resale price maintenance . The bench seems unconvinced as the Counsel admittedly, has no evidence to establish that there has been any collusion. However, the Counsel stresses on the fact that it is not necessary to establish existence of collusion, it is only necessary to show that the effect is anti-competitive.

Mr. Verma takes the Counsel to the refusal to deal submission. Mr. Handoll notes that the case cited by the Counsel does not seem relevant to refusal to del in the facts of the present case. However, the Counsel explains how they refusal to trade with someone does not mean impermissible right to trade.

The Appellants begin with the rebuttals that the threat of litigation on breach does not imply any specific sanctions.He ends his chain of rebuttals by explaining that the condition for elimination of competition doe snot need to be about all competitors but mere effective elimination will suffice.

The judges complemented the Respondents on his short and sweet sur-rebuttals.

And now we break to finally gather for the valedictory ceremony.

The valedictory ceremony begins with the an address by John Handoll and felicitation by Dean I.P. Massey. Mr. Rao, in a short address congratulated the OC for the event and commented on the capabilities and interests of the team.

The closing address was given by Dean I.P. Massey wherein he congratulated all participant on the performance and thanked SCC and Shardul Amarchand Mangaldas for their cooperation.

And the awards go to:

Hearty congratulations to everyone!!

And we have reached the end of the Ninth NLU Antitrust Moot Court Competition, 2018, with our Joint Convenor, Mr. Akshay Sahay’s vote of thanks. It has been an incredible experience organizing this moot and we hope everyone had an equally enriching experience!

We hope to see you back next year with better competition and even greater enthusiasm! 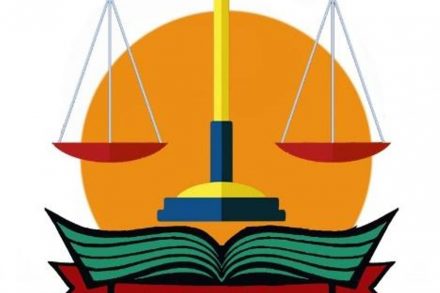 By Bhumika Indulia Published on September 14, 2020 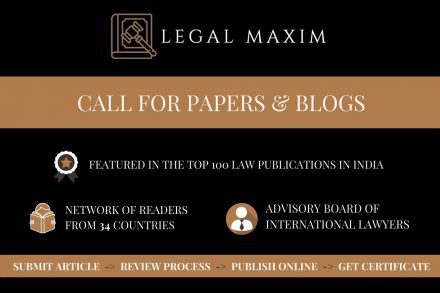 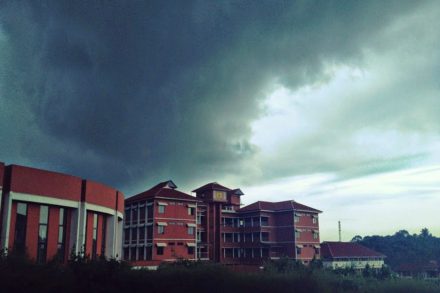