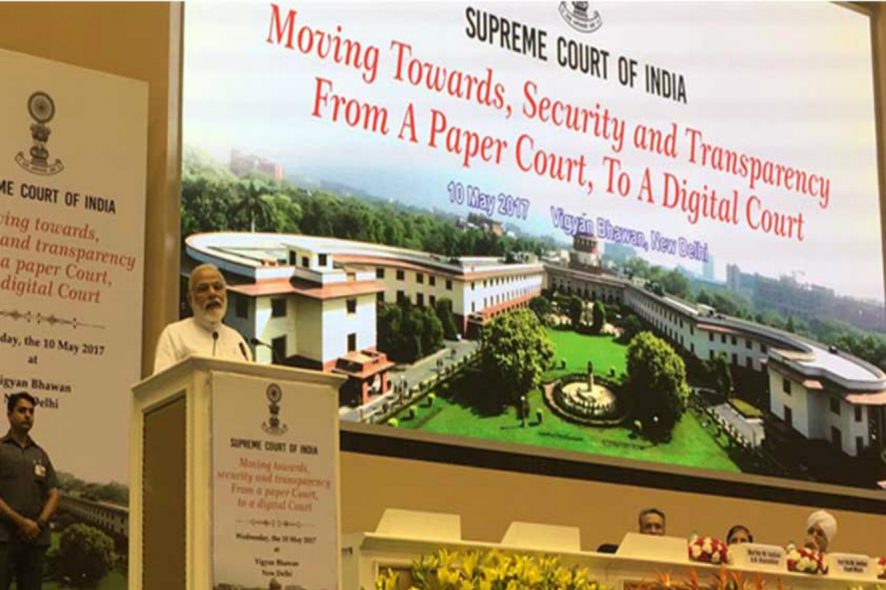 Speaking on the occasion, the Chief Justice of India, Shri Justice J.S. Khehar, recalled the Sesquicentennial Celebrations of Allahabad High Court on 2nd April this year. He said that on that day, Prime Minister Narendra Modi had made a strong case for introducing technology to ease the working of courts. Explaining the benefits of the digital filing application, the Chief Justice of India described this initiative as the biggest leap towards introducing technology in the judicial system.

Making a presentation on the application, Shri Justice Khanwilkar said the new initiative would be an illustration of “Sabka Saath, Sabka Vikas.” Union Minister for Law and Justice, Shri Ravi Shankar Prasad appreciated the Supreme Court for this digital innovation.

The Prime Minister recalled the Chief Justice of India’s appeal at Allahabad on 2nd April, for the higher judiciary to take up hearings of cases on at least some days during the vacation. He said the appeal was inspirational, and he has heard very encouraging news in this regard from the Supreme Court and the High Courts. He said this spirit brings about a positive change, and engenders a sense of responsibility. He added that it also creates trust among the common people, which is the key to ‘New India.’

The Prime Minister said that technology had often been equated to hardware in the past, and therefore, it is important to bring about a change in mindset. He said technology can only be embraced collectively within an institution. He said paperless initiatives save the environment, and are therefore a great service for future generations.

Speaking of the benefits of technology, the Prime Minister recalled the recently organized “Hackathon,” where 400 issues across Ministries in the Government of India were identified, and 42,000 students from Indian Universities spent 36 hours in an attempt to solve them. He said that Ministries were adapting many of the outcomes of this exercise. The Prime Minister expressed confidence that the combination of “Information Technology” and “Indian Talent” would create “India Tomorrow.”

Dwelling on the theme of technology, the Prime Minister spoke of the implications and possibilities that “Artificial Intelligence” could bring about. The Prime Minister mentioned several occasions in the recent past, when people from various walks of life had come forward to help the poor. In this context, he recalled the success of the “Give-It-Up” movement to give up LPG subsidy. Similarly, he mentioned the initiative taken by doctors across the country to treat poor pregnant women free of cost on the 9th of every month. In the same vein, he urged lawyers to come forward to provide pro-bono legal aid to the poor and needy.