Supreme Court: The bench of MR Shah* and BV Nagarathna, JJ has modified the order passed by the Allahabad High Court wherein it had quashed several reassessment notices issued by the Revenue, issued under section 148 of the Income Tax Act, 1961, on the ground that the same are bad in law in view of the amendment by the Finance Act, 2021 which has amended Income Tax Act by introducing  new provisions i.e. sections 147to151 w.e.f. 1st April, 2021.

The Parliament introduced reformative changes to Sections 147 to 151 of the Income Tax Act, 1961 governing reassessment proceedings by way of the Finance  Act, 2021, which was passed on 28th  March, 2021.

But prior to pre-Finance Act, 2021, while reopening an assessment, the procedure of giving the reasons for reopening and an opportunity to the assessee and the decision of the objectives were required to be followed as per the ruling in GKN Driveshafts (India) Ltd. v. Income Tax Officer, (2003) 1 SCC 72.

Approximately 90,000 such reassessment notices under section 148 of the unamended Income Tax Act were issued by the Revenue after 01.04.2021, which were the subject matter of more than 9000 writ petitions before various High Courts across the country and by different judgments and orders, , the High Courts have taken a similar view as that of the Allahabad High Court and have set aside the respective reassessment notices issued under section 148 on similar grounds.

While the Revenue was contemplating to prefer appeals against the similar judgments and orders passed by various High Courts, the Court passed PAN INDIA order and observed that the Revenue need not file separate individual appeals which may be more than 9000 in numbers.

The Supreme Court observed that the new provisions substituted by the Finance Act, 2021 being remedial and benevolent in nature and substituted with a specific aim and object to protect the rights and interest of the assessee as well as and the same being in public interest, the respective High Courts have rightly held that the benefit of new provisions shall be made available even in respect of the proceedings relating to past assessment years, provided section 148 notice has been issued on or after 1st April, 2021.

However, at the same time, it was conscious of the fact that the judgments of the several High Courts would result in no reassessment proceedings at all, even if the same are permissible under the Finance Act, 2021 and as per substituted sections 147 to 151 of the IT Act.

Observing that the Revenue cannot be made remediless and the object and purpose of reassessment proceedings cannot be frustrated, the Court noticed,

“It is true that due to a bonafide mistake and in view of subsequent extension of time vide various notifications, the Revenue issued the impugned notices under section 148 after the amendment was enforced w.e.f. 01.04.2021, under the unamended section 148. In our view the same ought not to have been issued under the unamended Act and ought to have been issued under the substituted provisions of sections 147 to 151 of the IT Act as per the Finance Act, 2021. There appears to be genuine non-application of the amendments as the officers of the Revenue may have been under a bonafide belief   that the amendments may not yet have been enforced.”

Therefore, in order to strike a balance between the rights of the Revenue as well as the respective assesses as because of a bonafide belief of the officers of the Revenue in issuing approximately 90000 such notices, the Revenue may not suffer as ultimately it is the public exchequer which would suffer, the Court modified the order of the High Court to the following extent:

(i) The impugned section 148 notices issued to the respective assessees which were issued under unamended section 148 of the IT Act, which were the subject matter of writ petitions before the various respective High Courts shall be deemed to have been issued under section 148A of the IT Act as substituted by the Finance Act, 2021 and construed or treated to be show-cause notices in terms of section 148A(b). The assessing officer shall, within thirty days the date of order provide to the respective assessees information and material relied upon by the Revenue, so that the assesees can reply to the show-cause notices within two weeks thereafter;

(ii) The requirement of conducting any enquiry, if required, with the prior approval of specified authority under section 148A(a) is hereby dispensed with as a one-time measure vis-à-vis those notices which have been issued under section 148 of  the unamended Act from 01.04.2021 till date, including those which have been quashed by the High Courts. Even otherwise as observed hereinabove holding any enquiry with the prior approval of specified authority is not mandatory but it is for the concerned Assessing Officers to hold any enquiry, if required;

The Court clarified that the present order shall be applicable PAN INDIA and all judgments and orders passed by different High Courts on the issue and under which similar notices which were issued after 01.04.2021 issued under section 148 of the Act are set aside and shall be governed by the present order and shall stand modified to the aforesaid extent.

The present order will also govern the pending writ petitions, pending before various High Courts in which similar notices under Section 148 of the Act issued after 01.04.2021 are under challenge. 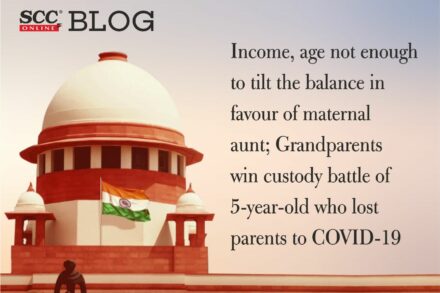 HP HC | Contemnor discharged under S. 138 NI Act because of inability to pay the amount of compensation as already completed the duration of imprisonment