The genesis of the case were that the petitioner’s father, who was working as Process Writer in District Court establishment had preferred an application seeking voluntary retirement on medical grounds. An application was also preferred to provide compassionate appointment to the petitioner as per circular of General Administration Department (GAD) dated 10-06-1994; i.e. Scheme of Compassionate Appointment.

The chronological dates of events which lead to instant appeal were as follows:

Termination of the Petitioner

Resultantly, petitioner was put to notice by the District Court establishment and; in turn, he filed his response. The State opined that the circular dated 10-06-1994 which permitted appointment of petitioner on the ground of voluntary retirement of his father, stood withdrawn/cancelled much before the date of his appointment, hence a termination order was issued against the petitioner declaring his appointment as illegal.

Findings of the High Court

Grievances of the Petitioner

The petitioner submitted that though the scheme was withdrawn/amended vide the new scheme dated 03-01-1995, his application/process for appointment under the earlier scheme was already processed by the State and he was appointed vide Order dated 09-03-1995. Hence, the petitioner had challenged the termination order stating that he had served more than 22 years of continuous and uninterrupted service and his service could not be termed as illegal owing to the facts that on the date of application of appointment the scheme in question (Circular dated 10-06-1994) was very much applicable.

The petitioner contended that the High Court had failed to take note that, the application for appointment was based on the old scheme and the new scheme only came into effect the after application was submitted. Further, the Petitioner was never asked to reapply or the application was not rejected during interview process; rather he was appointed.

Reliance was placed by the petitioner on SBI v. Jaspal Kaur, (2007) 9 SCC 571, to contend that an administrative or executive order cannot have retrospective effect so as to take away the right accrued/vested right available to the Petitioners/employees. Therefore, the petitioner argued that the Circular dated 03-01-1995 (new scheme) will   have no applicability in his case since it is trite in law that every order/scheme/policy decision shall apply prospectively and not retrospectively.

In the Backdrop of above, the Court had issued notice to the State government. Additionally, the recovery initiated against the petitioner pursuant to the impugned order of the High Court was also stayed by the Court.

Evidently, a case on the similar question of law had been referred to be adjudged by a larger Bench of the Supreme Court in SBI v. Sheo Shankar Tiwari, (2019) 5 SCC 600, wherein the Bench had opined that principles emanating judicial precedents are not consistent and do not reconcile. 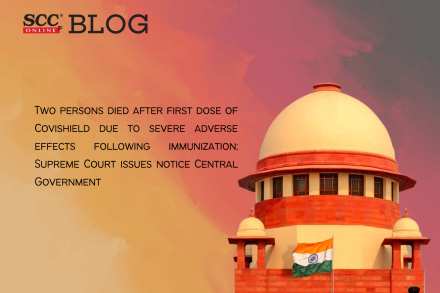 Supreme Court on preferring an appeal before NCLAT beyond a period of 30 days: Read the Law [Explained]