Supreme Court: The Division Bench of L. Nageswara Rao and B.R. Gavai*, JJ., upheld the impugned judgment of the High Court wherein the High Court had granted property rights to the step children of the deceased in her mehar property by declaring the mehar deed as unenforceable for being nominal.

Issue before the Court

The High Court found that the voluminous documents of evidence; namely birth certificates of plaintiffs 4 to 8, the transfer certificates issued by the Government Higher Primary School established that plaintiffs 4 to 8 were the children born to Mohiyuddin Pasha through Mazambi. With regard to Mehar Deed, the High Court opined that it was a nominal one and was not acted upon as in an earlier suit for partition i.e. O.S. No.514 of 1961, the deceased Mohiyuddin himself had pleaded that the first son of Noorbi and Mohiyuddin Pasha, namely Rahaman Barid, was demanding separate share in the properties and was residing separately and it was to avoid any share in the suit schedule properties the Mehar Deed was created in favour of his first wife Noorbi.

Hence, the High Court reversed the findings of the Appellate Court that plaintiff 3 was not married to Mohiyuddin Pasha for being erroneous in law, the High Court had relied on the oral as well as the documentary evidence specifically the evidence of Noorbi’ brother who had admitted existence of second marriage. Consequently, the High Court vide held that all the suit schedule properties were required to be divided amongst appellant and plaintiffs 3 to 8. However, it was held that plaintiffs 1 and 2 were not entitled for any share in the suit schedule properties as Rehaman Barid, husband of plaintiff 1 and father of plaintiff 2 predeceased the propositus i.e., Mohiyuddin Pasha.

In the light of the above and considering the records available and reasoning behind the impugned judgment of the High Court, the Bench opined that the High Court had rightly interfered with the findings as recorded by the First Appellate Court, inasmuch as the First Appellate Court was not justified in reversing the findings of the Trial Court in that regard which were based on proper appreciation of evidence.

For the Appellant: Naresh Kaushik, Advocate

For the Respondents: Girish Ananthamurthy, Advocate 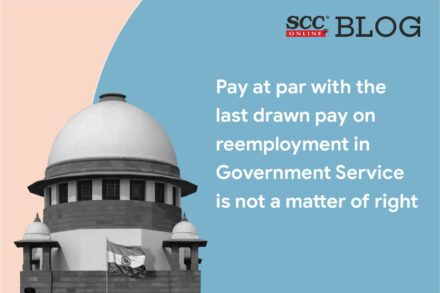 Pay on a par with last drawn pay on reemployment in Government Service? Not a matter of right, holds Supreme Court