Bombay High Court: The Division Bench of Ujjal Bhuyan and Abhay Ahuja, JJ., gave a splitting verdict on the constitutionality of Sections 13(8)(b) and 8(2) of the Integrated Goods and Services Tax Act, 2017.

The petitioner, who was engaged in providing marketing and promotional services to customers located outside India had challenged the validity of Sections 13(8)(b) and 8(2) of the Integrated Goods and Services Tax (IGST) Act, 2017 contending that these provisions were ultra vires Articles 14, 19, 245, 246, 246A, 269A and 286 of the Constitution and also ultra vires the provisions of the Central Goods and Services Tax  (CGST) Act, 2017, IGST Act, 2017 and Maharashtra Goods and Services Tax (MGST) Act, 2017. The case of the petitioner was that he is a proprietor of a proprietorship firm  Dynatex International having its registered office in Mumbai which was engaged in providing marketing and promotion services to customers located outside India. It was registered as a supplier under the provisions of the CGST Act, 2017.

In All India Federation of Tax Practitioners, it was held that service tax is a VAT which in turn is a destination based consumption tax in the sense that it is on commercial activities. It is not a charge on the business but on the consumer and it would logically be leviable only on services provided within the country. Similarly, in Commissioner of Service Tax Vs. SGS India Pvt. Ltd., 2014 (34) STR 554 (Bom.), the High Court had held that if services were rendered to such foreign clients located abroad then such an act can be termed as ‘export of service’ which act does not invite a service tax liability.

The Bench explained, while Article 246A deals with special provision with respect to GST, Article 269A provides for levy and collection of GST in the course of inter-state trade or commerce. Therefore,

“A conjoint reading of the two Articles would show that the Constitution has only empowered Parliament to frame law for levy and collection of GST in the course of inter-state trade or commerce, besides laying down principles for determining place of supply and when such supply of goods or services or both takes place in the course of inter-state trade or commerce. Thus the Constitution did not empower imposition of tax on export of services out of the territory of India by treating the same as a local supply.”

Further, Article 286 lays down restrictions as to imposition of tax on the sale or purchase of goods. Similarly, Article 286(1) imposes an expressed bar that no law of a state shall impose or authorize imposition of a tax on the supply of goods or services or both where such supply takes place in the course of import into or export out of the territory of India. The Bench expressed, though Article 286(2) empowers the Parliament to make laws formulating principles for determining supply of goods or of services or both certainly the same could not be used to foil or thwart the scheme of clause (1).

Noticeably, the petitioner fulfilled the requirement of an intermediary as defined in Section 2(13) of the IGST Act, and all the conditions stipulated in sub-section (6) of Section 2 for a supply of service to be construed as export of service were complied with. The overseas foreign customer of the petitioner fell within the definition of ‘recipient of supply’ in terms of section 2(93) of the CGST Act read with Section 2(14) of the IGST Act. Therefore, it was an ‘export of service’ as defined under section 2(6) of the IGST Act read with Section 13(2) thereof. Hence, Justice Ujjal Bhuyan opined,

“Evidently and there is no dispute that the supply takes place outside the State of Maharashtra and outside India in the course of export. However, what we notice is that section 13(8)(b) of the IGST Act read with section 8(2) of the said Act has created a fiction deeming export of service by an intermediary to be a local supply i.e., an inter-state supply. This is definitely an artificial device created to overcome a constitutional embargo.”

In State of Travancore – Cochin Constitution Bench of the Supreme Court referred to Article 286(1) and held that whatever else may or may not fall within Article 286(1)(b), sales and purchases which themselves occasion the export or the import of the goods, as the case may be, out of or into the territory of India would come within the exemption. Reliance was placed on GVK Industries Ltd., wherein the Supreme Court had held that the Parliament is constitutionally restricted from enacting extra-territorial legislation but such restriction should be made subject to certain exigencies, such as, it should have a real connection to India which should not be illusory or fanciful.

Similarly, in Electronics Corporation of India Limited v. Commissioner of Income Tax, 1989 Supp (2) SCC 642 , it was held that unless a nexus with something in India exists, Parliament would have no competence to make the law. Article 245(1) empowers Parliament to enact law for the whole or any part of the territory of India. The provocation for the law must be found within India itself. Such a law may have extra-territorial operation in order to subserve the object and that object must be related to something in India. It is inconceivable that a law should be made by Parliament in India which has no relationship with anything in India.

Thus, the Bench held that it was apparent that Section 9 of the CGST Act cannot be invoked to levy tax on cross-border transactions i.e., export of services. Likewise from the scheme of the IGST Act, it is evident that the same provides for levy of IGST on inter-state supplies. Import and export of services have been treated as inter-state supplies in terms of Section 7(1) and Section 7(5) of the IGST Act. On the other hand sub-section (2) of Section 8 of the IGST Act provides that where location of the supplier and place of supply of service is in the same state or union territory, the said supply shall be treated as intra-state supply. However, the Bench remarked,

“By artificially creating a deeming provision in the form of Section 13(8)(b) of the IGST Act, where the location of the recipient of service provided by an intermediary is outside India, the place of supply has been treated as the location of the supplier i.e., in India. This runs contrary to the scheme of the CGST Act as well as the IGST Act besides being beyond the charging sections of both the Acts.”

CCI | Companies not to indulge in mandating clearance/NOC/LOC that are anti-competitive as per S. 3 of Competition Act 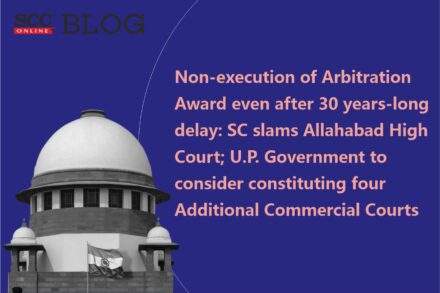 Fill up the vacancies for Sub-Inspectors & Platoon Commanders at the earliest: SC to UP Govt.