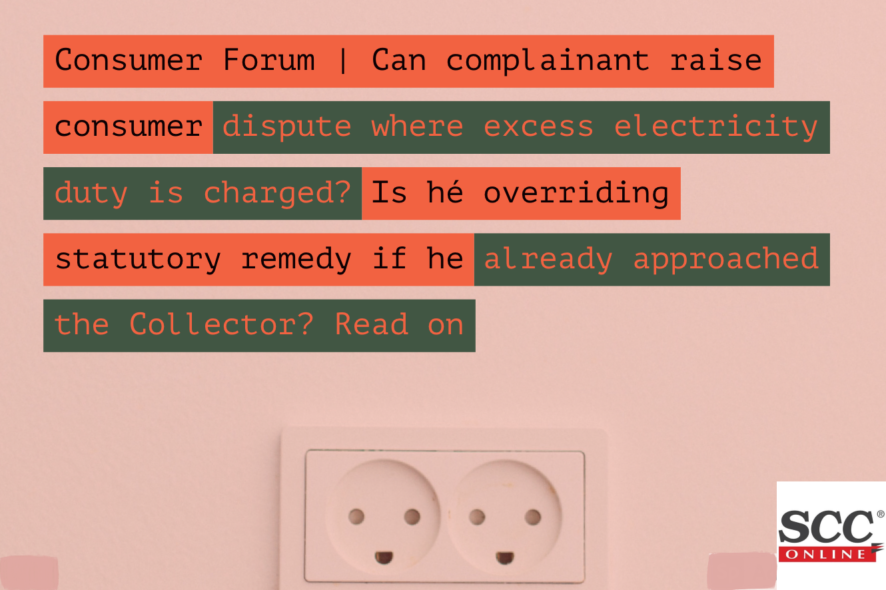 Consumer Disputes Redressal Commission Gujarat State, Ahmedabad: Justice V.P. Patel, President and U.P. Jani, Member, addressed an appeal which was raised in light of a complaint raised due to excess of electricity duty being charged.

Appellants filed the instant appeal under Section 15 of the Consumer Protection Act, 1986 on being dissatisfied with the decision of the District Commission.

Coram noted that the documents produced by the complainant addressed to the Collector of Electricity Duty can be said to be applicants for a refund of an amount of excess electricity duty under Rule 12 of the Electricity Rules.

Section 3 of Consumer Proetction Act cannot be said to be inconsistent with Rule 12 of the Electricity Duty Rules.

Since the Collector of Electricity Duty did not act in conformity with fundamental principles of judicial procedure, District Consumer Commission had jurisdiction to deal with the matter.

In view of the above observation, Consumer Court has jurisdiction in this case.

Hence, in the present matter, it was held that the complainant can get refund of the amount of Electricity Duty charge not prescribed under the Electricity Act and Rules.

As per the documentary evidence and arguments of the parties, Commission concluded that the complainant was not entitled to get any amount of electricity duty for last one year. Therefore, the appeal was allowed.

On verifying the amount deposited by appellant the same shall be refunded with interest. [Gujarat Urja Vikas Nigam Ltd. v. Cham Trawi Nets Organisation, Appeal No. 913 of 2014, decided on 24-05-2021]

Section 2(1)(c) of Consumer Protection Act, 1986: ‘Complainant’ means any allegation in writing made by the complainant that trader or service provider, as the case made, has charged for the goods or for the service mentioned in the complaint a price in excess of the price, fixed by or under any law in time being force.[for the definition of “complainant” in CPA, 2019, see S. 2(6)]

All HC | Additional Collector can exercise powers and discharge the duties of a Collector under U.P. Land Revenue Act or any other Act for the time being in force

If an advertisement regarding scholarship was published in Urdu language, can it be presumed that it was targeted at students belonging to a particular community only? Del HC addresses

Dishonour of Cheque | Is it mandatory for trial court to award interim compensation under S. 143-A NI Act on mere invocation thereof? Del HC decides whether S. 143-A is directory or mandatory?