The Chair is a first of its kind and a beginning of a new chapter in the history of legal education in India through collaborative efforts of GNLU and CAM. Gujarat National Law University will be the first National Law University to venture into this niche topic of Ethics and Values. This chair that aims to change the face of legal thinking and ethical actions in years to come, for this the GNLU-CAM shall make collaborated efforts to organize activities of teaching, training, research and publication on ethical thinking. This Inaugural ceremony will be followed by a training program through collective efforts of GNLU and CAM, bringing different facets of ethical thinking and the application of these in practical situations, through innovative teaching methodology. Associates CAM will conduct sessions including Mr. Cyril Shroff himself in addition to few experts from outside.

The evening was filled with enriching speeches by speakers. The audience was first addressed by Dr. K. Parameswaran, Associate Professor of Law, GNLU. He introduced the topic in hand to the audience. He explained the need of ethical thinking that bridges the gap between one’s individual life and his contributions to collective life. He in his speech highlighted the importance of ethics in legal education and profession, its values impacting judiciary and state-services.

After the conclusion of Dr. Parameswaran’s speech, Ms Pandey invited Dr. Bimal N Patel, Director and Professor of Public International Law to give welcome remarks. Dr. Bimal explained why ethics has become so important and what ethics bring to legal profession. He stressed how ethics must start from legal education itself in order to have impact in the society. It was very well received from one and all. He then expressed his sincere gratitude towards CAM team and especially Mr Cyril Shroff for joining hands with GNLU to establish this chair. He also mentioned about other ventures of GNLU with other members of legal fraternity. He also presented mementoes to the Guests.

Inauguration then proceeded to invite Guest of Honor Mr Cyril Shroff to address the audience. Mr. Cyril Chose to speak on Ethics and Values of legal profession- Observation of a law firm.

Mr Cyril elucidated about the core values which ensured survival of his law firm where he is the managing partner. His firm Amarchand Mangaldas Shroff has crossed 100 years of its establishment. He pointed out that the purpose of the firm started by his grandfather was to produce finest lawyers in this just world. He elaborated on the importance of character, competence and commitment. Mr Shroff also spoke about the importance of this training program in India as it is the first chair of its kind to be set up in any law school. He thanked Dr Bimal N Patel and GNLU for their continuous support and innovative insights on this topic. Mr Shroff also discussed about everyday ethics.

He was of the opinion that everyday ethics allow a person to be a true professional, gives him/her courage to face the society. He said that legal ethics is a moral compass which will help a legal professional to align with the value system. He said that ‘ideas develop, but values protect’ and thus, ‘emotional intelligence is more important than normal IQ’. This is all about ethical thinking. He stated that legal fraternity is a people’s organization. He said that embedding human values in the firm to produce the finest lawyers in this just world has been his firm’s motto. He then talked about the importance of lawyers in the society. He was of the opinion that ethics helps to make a tradeoff between two rights or to make a decision as to what is the right call to take.

He grabbed the attention of audience by giving an insight of how decisions are made in CAM offices. Illustration: Everyday ethics is like a 2/2 matrix where the one column belongs to Ram (who is always right and walks on the path of dharma), bottom to Krishna (who signifies mostly substance than form), and another Duryodhan (who is more of form than substance) and finally its bottom to Raavan (who is wrong on both form & substance). Most choices are to be made between Krishna and Duryodhan only. So, in the firm whenever there is any dilemma they follow the same analogy to reach a decision. Now, between Vidhur and Krishna, the former was like the in-house counsel who gave his advice and then sat down, he was not result oriented. While Krishna was the navigator, he is there till the end and was result oriented. Therefore, the course will aim at aiding in coming to that decision as to whether one would want to be the navigator or the in house counsel to his or her clients.

Mr Dhaval shared the lessons he learnt in his professional career and the lessons he was taught by his father (former advocate) and the legends of field like Mr. Nani Palkhiwala. He felt perplexed in his initial days as a litigator as many a times his client was morally wrong but he didn’t know if he should defend him or not so he wrote a letter to Nani Palkhiwala who to his surprise responded back by saying that, “A lawyer is entrusted to protect his client’s interest irrespective of the public opinion or his or her personal opinion.” This is the basic principle to be followed by a lawyer. He believes that all the parties to a litigation have a right to put their views before the adjudicator and the adjudicator uses rule of law as a tool to achieve Justice. Just because a conclusion looks wrong to the society, it doesn’t have to be. A lawyer’s job is not to be judgmental, he must present the facts as it exists, and he is not to decide what is right or what is wrong.

He then gave an example for depicting the same, Balbir Singh who was convicted for conspiracy to murder Indira Gandhi was to be hanged till death when he appealed to the Supreme Court. No lawyer was ready to accept his brief but Mr. Ram Jethmalani took his brief and finally he was able to get him acquitted on ground of lack of evidence. As per legal ethics, he must tell his client about the facts properly, the law on the same and then advise him properly. Ultimately, it will be the client’s choice whether to go to court or not.

Ms Niyati then invited the Honorable Chief Guest Justice M.B.Shah to address the audience. He spoke on “Ethics and Values of legal profession- Observation of a Judicial Personnel”.

Mr Shah explained the importance of character and pity in legal profession. He gave an example of Hanuman being sentenced by Raavan, where Vibhishan argued that it would be against Dharamshastra to convict him by not giving him an opportunity to be defended. Hence, the practice has been followed in India since time immemorial.

He believes that ethics and economics have to go together, and the former should be given importance over the other, but it doesn’t mean that economics has to be given away. It has to be morally just and right. Today, in this world this young generation is tempted by monetary objectives and greed. But ethics has to be followed justly.

If a poor person wants to fight his case but if he doesn’t have the resources to pay the lawyer then it should be understood that justice is more important and the lawyer must undertake that case accordingly. He quoted Gandhiji,

“Ethics without religion can survive but religion without ethics is of no use. – “Gandhiji”

A person who has committed a serious crime; if a lawyer wants to get him acquitted by hook or crook, then it should be kept in mind as to what will be its consequences on the society. Law and rules with regard to environment have to be properly construed, as harmony between the two is essential for the human survival. If the act is illegal or causing harm to the environment, then it has to be stopped. He gave a lot of examples where environment was being harmed around the country, neither ethics is followed nor is the environment being protected. He made sure that his decisions were made on equity as justice would follow it.

Vote of thanks was presented by Dr. Thomas Mathew, Registrar and Professor of Science and Technology, GNLU. He explained in nutshell how every speaker emphasized the importance of ethics and how it must be carried forward in legal education. Inauguration ended with a National Anthem. GNLU also arranged for a BSF Band to play music which was highly respected by one and all that was followed by a wonderful dinner.

For any further information you may contact Dr. K. Parameswaran, Associate Professor of Law, GNLU, at 812-8650-833 or kparameswaran@gnlu.ac.in. 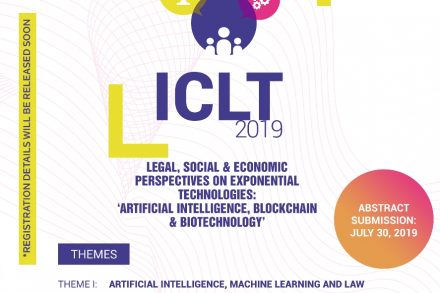 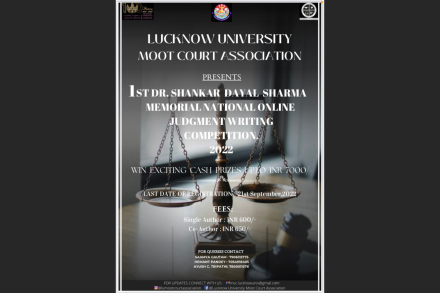 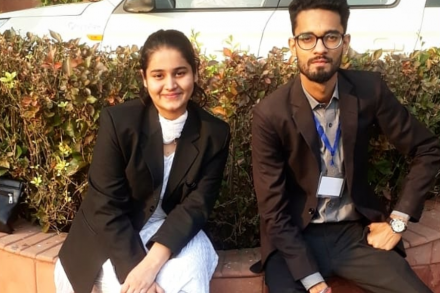