Ban on Commercial Surrogacy: The article attempts to briefly discuss the philosophical ideas behind advocating and banning surrogacy, as well as the Indian jurisprudence on this subject. The article seeks to draw a case for allowing commercial surrogacy by means of State regulation after taking note of several positions taken in different comparative jurisdictions. [Banning Commercial Surrogacy: Can A Regulated framework address the Moral Concerns? By Akaant Kumar Mittal, (2017) 2 SCC (J-38)]

Constitution of India — Art. 226 — Interference with issues relating to security — Airport/Aircraft security — Direction of the High Court regarding grant of exemption to Judges from pre-embarkation security checks at airports and laying down of “National Security Policy” — Validity of: Matters of security ought to be determined by authorities of the Government vested with the duty and obligation to do so. Further, the formulation of suggestions by the High Court for framing a National Security Policy travelled far beyond the legitimate domain of judicial review. Formulation of such a policy is based on information and inputs which are not available to the court and court is not an expert in such matters. Judicial review is concerned with the legality of executive action and the court can interfere only where there is a breach of law or a violation of the Constitution. [Union of India v. Rajasthan High Court, (2017) 2 SCC 599]

Constitution of India — Art. 246 and Sch. VII Lists I and II — Repugnancy — Incidental encroachment — Doctrine of federal supremacy — Inconsistency between Central and State Acts: If encroachment creates inconsistency which is irreconcilable and Central Law is dominant legislation, the same would prevail over State law to the extent of inconsistency. Similarly, incidental encroachment made by parliamentary legislation on a subject of State legislation would be nullified where State legislation is dominant — Sale of hypothecated/mortgaged property of tribals to buyers irrespective of whether buyers were tribals or non-tribals by bank/FI to recover its dues, is permissible under Securitisation and Reconstruction of Financial Assets and Enforcement of Security Interest Act, 2002 which is referable to Entry 45 of List I, even though the same is prohibited under S. 187 of Tripura Land Revenue and Land Reforms Act, 1960, which is referable to Entries 18 and 45 of List II of Sch. VII. Sale of mortgaged property by bank is an integral part of banking business with which 2002 Act deals, whereas Tripura Act is intended to consolidate land revenue and to provide agrarian reform and it incidentally encroached on the area of banking. So considered, 2002 Act is a dominant legislation and S. 187 of Tripura Act is an incidental encroachment on legislative field of Parliament in this matter. Inconsistency so created by S. 187 of Tripura Act, being irreconcilable, held, by virtue of Art. 246(1), 2002 Act so far as sale of hypothecated/mortgaged property by bank. [UCO Bank v. Dipak Debbarma, (2017) 2 SCC 585]

Freedom To Choose Foreign Law And Foreign Arbitral Tribunal: Recently, certain judgments of the Supreme Court and of the High Courts have had occasion to deal with contracts conferring exclusive jurisdiction on courts either in India or outside and questions have particularly arisen as to whether two Indian entities can, by agreement, confer such exclusive jurisdiction on foreign courts even if no part of the cause of action has arisen within the territorial jurisdiction of such foreign courts. Arguments have been advanced that conferring exclusive jurisdiction on a court or an Arbitral Tribunal with its seat outside India would be void as offending Sections 23 and 28 of the Indian Contract Act. Issues have also arisen with regard to antisuit injunction cases involving forum conveniens arguments. Apart from exclusive forum issues, cases have also arisen where the contract is silent as to the governing law and as to the principles upon which the court or Arbitral Tribunal could determine the governing law and this has resulted in the development of the principle of “closest and most real connection”. The author discusses the issue in this article. [Freedom To Choose Foreign Law And Foreign Arbitral Tribunal, Anti-Suit Injunction Normally not Tenable in Such Cases by Kailash Nath P. S. S.,(2017) 2 SCC (J-44)]

Indian Emergency of 1975-1977: The imposition of the emergency in 1975 struck at the very core of these ideals, which constitute our democracy. It was perhaps the darkest period in the history of independent India. This Article analyses the constitutional fabric of Emergency provisions along with its effect and impact on legal system. [1975-1977 Emergency — Some Legal Recollections by Ashok H. Desai, (2017) 2 SCC (J-31)]

Rent Control and Eviction — Eviction Decree/Order — Passed against tenant, a partnership firm — Execution thereof against employee of tenant firm: Employee of a tenant cannot independently claim legal right of his own to remain in possession of demised premises for want of privity of contract between him and landlord. Employee’s possession is only with permission of employer firm (tenant) in terms of contract of employment as tenancy is created by virtue of agreement between landlord and tenant only. Once tenancy is created, same would be subject to provisions of TP Act and Rent Control Act. After passing of eviction decree, possession of tenant firm and persons claiming through such firm would become unauthorized. Thereafter, employee continuing to remain in unauthorised possession of demised premises as trespasser would also be bound by decree. Neither was such employee required to be impleaded as defendant in eviction suit against firm nor any separate suit under general law for possession was required to be filed against such employee trespasser. [Nandkishor Savalaram Malu v. Hanumanmal G. Biyani, (2017) 2 SCC 622]

Representation of the People Act, 1951 — S. 123(3), Ss. 123(2), (3) and (3-A) — Election — Corrupt Practices/Electoral Offences — Ingredients/What amounts to appeal on grounds of religion, caste, community, etc/Publication: S. 123(3) should be given a broad, purposeful and contextual interpretation rather than a literal and textual construction. S. 123(3) should be interpreted in context of simultaneous and contemporaneous amendments, that is, insertion of cl. (3-A) in S. 123, RP Act and S. 153-A IPC. Such a construction is required to maintain purity of electoral process and free it from communal and fissiparous tendencies, tendencies that are against national unity. Ss. 123(2), (3) & (3-A), RP Act seek to eliminate from electoral process divisive factors based on differences relating to our historical and political background which may generate powerful emotions depriving people of their rational thought and action, thereby running counter to tenets of Constitution. Our Constitution gives us single citizenship and a secular Government. Thus, S. 123(3) must cover all appeals made to electorate on grounds of religion, etc. of: (i) any candidate, or (ii) his agent, or (iii) any other person making the appeal with the consent of the candidate, or (iv) the voter/elector. Interpretation that seeks to address mischief, that is consistent with Constitution and promotes constitutional objectives and that responds to nation’s needs, must be adopted. Effect of constitutional ethos and secular character of out polity has to be considered. Rule that religious activities should not be mixed up with secular activities is evident from the provisions of the Constitution. Applying rule to present case, State can and indeed has in terms of S. 123(3) forbidden interference of religions and religious beliefs with secular activity of elections to legislative bodies. Court should free electoral process from forces of national disintegration like fundamentalism and communalism and maintain secular character of our democratic polity. Judicial interpretation should be based on constitutional goals and statutory purpose. Where legislation and bye-laws are silent in a given aspect, courts will have to read constitutional requirement into said legislation. Where two interpretations are possible, one that promotes constitutional objectives ought to be preferred over other that does not do so. [Abhiram Singh v. C.D. Commachen, (2017) 2 SCC 629]

Service Law — Appointment — Assessment of relative merit — Matters to be considered: Competence and merit of candidate is adjudged not only on basis of qualifications he/she possesses but also taking into account other necessary factors like career of candidate, educational curriculum, experience in the field, general aptitude, personality and all other germane factors which expert body evolves for assessing suitability of candidate for the post. [J. Ashoka v. University of Agricultural Sciences, (2017) 2 SCC 609] 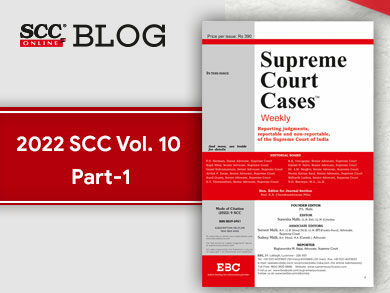 Reported By Editor Published on November 17, 2015