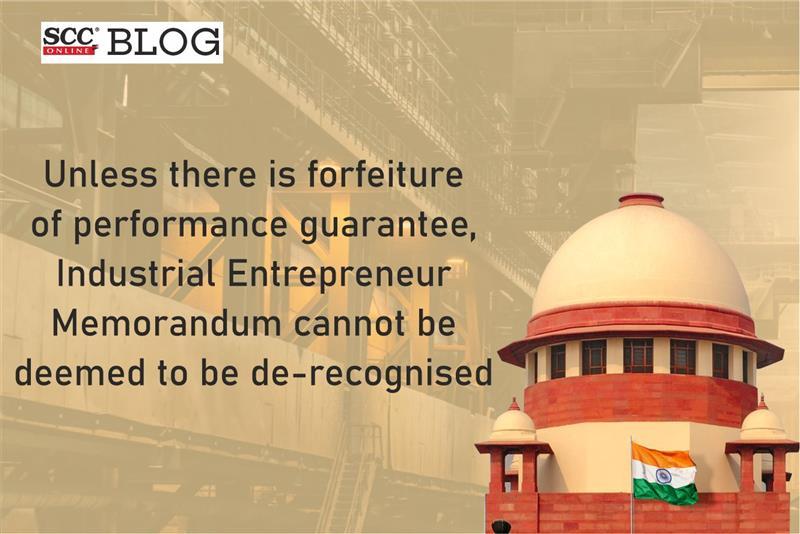 Supreme Court: While reversing the impugned decision of the Bombay High Court, the Division Bench of Hemant Gupta* and V. Ramasubramanian, JJ., held that unless there is forfeiture of performance guarantee and opportunity of being heard is granted to an entrepreneur, the Industrial Entrepreneur Memorandum cannot be deemed to be de-recognised automatically, only on account of lapsing of time.

The respondent-Loknete Marutrao Ghule Patil Dnyaneshwar Sahakari Sakhar Karkhana Ltd. had approached the Bombay High Court seeking directions that the Industrial Entrepreneur Memorandum (IEM) dated 08-09-2010, which allowed the appellant to set up a Sugar factory, be de-recognised in view of the provisions of Clause 6C of the Sugarcane (Control) Order, 1966 on the following grounds:

(ii) On 03-12-2011, the State of Maharashtra had issued a circular under Clause 6A of the Control Order that no sugar factory shall be set up within the radius of 25 kms of any existing sugar factory or any other new factory substituting the provisions that the minimum distance was for 15 kms existing on the date of grant of IEM, therefore, the proposed sugar factory did not meet the norm of 25 km.

(iii) The grant of extensions to set up the sugar factory issued on 14-11-2018 followed by another extension of time and to change the location on 17-10-2019 by the Central Government was contrary to the Control Order, 1966.

Noticeably, the appellant had applied for IEM on 08-09-2010, the same was acknowledged by the Central Government after the Commissioner of Sugar, Maharashtra issued a certificate regarding aerial distance between the existing sugar factory and the nearby proposed sugar factory was more than 15 km, as required at that time.

First Round of Litigation

The IEM was challenged before the Bombay High Court on the ground that the proposed factory did not meet the required aerial distance from the existing sugar factory and that it violated the provisions of the Environmental Protection Act, 1986 as the location fell within the radius of 500 meters from the bank of a river. Therefore, it was falling within no development zone.

By the decision dated 27-01-2014, the High Court directed that if the respondent (appellant herein) wants to carry out construction and development, it will have to comply with all laws including the anti-pollution, environmental protection, and ecology. However, with regard to the issue of aerial distance, the High Court held that since when the IEM was approved the required distance was 15 km, IEM was in compliance with the requirement in Clause 6-A of the Control Order, 1966. The Court added that the issue of the aerial distance certificate cannot be reopened at the instance of the petitioner or any other party again.

Second Round of Litigation and the Impugned Decision

In order to comply with the directions of the High Court, the appellant applied for extension of time and change of location due to earlier location being no development zone. On 14-11-2018, the Central Government allowed the extension after considering the comments of the State Government. Further extensions were also granted in the similar background on 15-11-2018, 12-04-2019 and 09-05-2019. Finally, the request for extension of time and for change of location was accepted on 17-10-2019 and one-year further extension was granted up to 07-09-2020 to implement the IEM dated 08-09-2010.

The second round of litigation began when the respondent approached the High Court against the aforesaid orders of the of the State Government and the Central Government granting extension of time and change of location.

It was further held that the respondent-appellant had not taken any effective steps within the period of two years from the date of acknowledgment of IEM, he had neither purchased the land for four years in the name of the factory nor placed orders for plant and machinery and even the civil work had not commenced. The High Court found that the IEM stood derecognized on 08-09-2014 as the four years for commercial production had lapsed and the maximum one-year extension also lapsed on 08-09-2015.

Issues before the Court

In the above backdrop, the appellant initiated the instant appeal and the followings issues arrived before the Court:

(i) Whether in the absence of any interim order in the first round of litigation, the State/ Central Government was justified in excluding the period during which the petition was pending while granting extension of IEM.

(ii) Whether the amended Control Order dated 03-12-2011 would be applicable when the High Court in the earlier writ petition has held that the issue of Aerial Distance Certificate cannot be reopened?

(iii) Whether the IEM stands lapsed on the failure on the part of the appellant to set up the sugar factory and start production within the time specified in Clause 6C or such lapsing would be only after an order in terms of Clause 6D of the Control Order is passed?

Validity of Multiple Extensions of Time

Relying on the latin maxim ‘Actus Curiae Neminem Gravabit', the Court stated that the act of the Court will not prejudice anyone. The Court noted that during the whole litigation history, the appellant was at the receiving end of the writ petitions, therefore the period spent in such lis cannot be used against him. The Court said,

“Though there was no interim order passed in the writ petitions, such petitions created a cloud on the right of the appellant to set up a sugar factory at the location earmarked and to commence commercial production.”

Noting that the writ petitions remained pending for a period of four years, the Court held that the period spent in defending such writ petitions was validly taken into consideration by the State/Central Government to grant extension of time limit fixed in the Control Order.

Further, the language of the Control Order had been amended time and again with a view to enable the competent authority to grant extension of time due to “unforeseen circumstances”. The Control Order amended on 12-08-2018 contemplates more than one unforeseen circumstance beyond the control of the person concerned including where the delay is due to any court case relating to land use, environment or “such other reason”.

Rejecting the aforementioned contention, the Court held that the extensions were given when the second round of litigation was pending before the High Court due to which the appellant was not able to take effective steps. Hence, the decision of the competent authority to grant extensions of time was a proper exercise of the powers and could not be said to be illegal, irrational or suffering from procedural impropriety.

Regarding the contention that the proposed factory did not meet the amended norm requiring that no sugar factory shall be set up within a radius of 25 kms of any existing sugar factory or any other new factory, the Court observed that the appellant had applied for IEM on 08-09-2010 (when the existing provision required the said distance to be 15 km) the same was acknowledged by the State Government and the Central Government and an aerial distance certificate was also issued in favour of the appellant.

On the basis of the aerial distance certificate, the IEM was acknowledged after the appellant furnished a bank guarantee of the sum of Rs. 1 crore which was to remain in force up to 04-04-2016. Further, the scheme of the Control Order shows that once IEM is granted, the timeline has to be determined keeping in view the date of the issuance of the IEM. Therefore, the Court held that the subsequent amendment in the Control Order would not have any application towards the IEM already issued.

Whether the IEM stood de-recognised?

The respondent argued that Clause 6C of the Control Order contemplates that if the steps are not taken within the timeline stipulated under the IEM, it shall stand de-recognized and the performance guarantee shall be forfeited. However, the Court noted,

“In the present case, the appellant was not the writ petitioner before the High Court. Rather, he was defending the permissions granted by the State and the Central Government. It was not prudent for the appellant to proceed with the heavy investment required for installation of a sugar factory and then to suffer the consequences depending on the outcome of the litigation.”

“The litigation initiated in public interest or by the rival sugar factory cannot be used against the appellant when the writ petition was disposed of with the condition that there cannot be any development within 500 meters of river which necessitated the change of location.”

Further, the Court held that the performance guarantee is liable to forfeiture after giving the concerned person a reasonable opportunity of being heard and the use of the word ‘shall' in Clause 6C does not make the provision mandatory but enables the competent authority to forfeit bank guarantee on failure to comply with the timeline. The Court observed that there are twin conditions to be fulfilled before formally de-recognizing the IEM:

(ii) the forfeiture of the performance guarantee.

The Court held that second will not arise unless the first is satisfied and the second step cannot be undertaken, without complying with an opportunity of personal hearing in terms of Clause 6D of the Control Order.

Thus, unless the necessary consequences of derecognition of IEM are undertaken, there is no automatic lapsing of IEM. The appellant had furnished a performance guarantee of Rs. 1 crore, however, no steps were taken either by the State Government or by the Central Government to forfeit such performance guarantee inasmuch as not even a show cause notice was issued. Hence, the Court observed that a conclusion cannot be drawn that the IEM is deemed to be lapsed automatically only on account of lapsing of time.

Considering that sugarcane area restrictions (zoning) are removed in Maharashtra since the year 1997, and the sugarcane growers are at liberty to provide sugarcane to any sugar mills as per their choice, the Court opined that the appellant cannot be denied the benefit of setting up of a sugar mill only on the basis of resistance from the competitor, who had only financial interest in mind. The Court expressed,

“In case of a competition, it is the consumer (farmer) who is the beneficiary. In the present case, the farmers are not getting the advantage of competition which could fetch them timely payment and better services.”

Consequently, the Court held that the order of the High Court allowing the writ petition filed by the competitors was liable to be set aside and in the absence of any finding by the High Court to the effect that the decision of the Central Government was arbitrary, irrational or unjust, the High Court had gravely erred in taking into consideration that appellant was remiss in not implementing IEM during the pendency of the writ petitions in the first round of litigation.

Additionally, the Court directed that the period spent in the second round of litigation shall also be excluded while determining the period during which the plant had to be set up and to commence commercial production.

Chidambaram, Senior Advocate, for the Respondent. 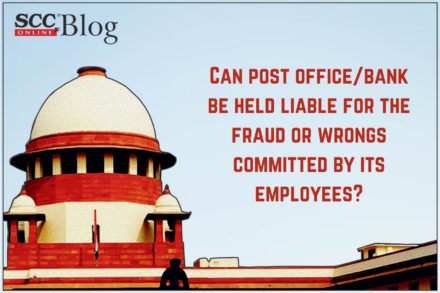 Explained| Can post office/bank be held liable for the fraud or wrongs committed by its employees?

Del HC | Normal wear & tear not a reason to end marital relationship: Can allegations of demand of dowry and alcohol consumption made by wife amount to ‘cruelty’? Read to know full story