Counsel for the appellant/petitioner submitted that Single Bench of the Court did not consider the correct import of judgment rendered by the Supreme Court in the case of Avtar Singh v. Union of India, (2016) 8 SCC 471 and caused illegality while affirming the impugned order whereby appellant had been found unfit for appointment on the post of police constable.

Advocate General for the respondents/State submitted that the authorities exercising discretion came to the conclusion that under the present facts and circumstances of the case, appellant did not deserve to be retained in the department as police constable. It was further observed by the Superintendent of Police, District Shivpuri that his acquittal does not come under clean acquittal, therefore, he was not befitting to be retained in police department.

The Court opined that in Avtar Singh (supra) case the Supreme Court had delineated the principles in detail and sufficient discretion had been given to the departmental authorities to look into the matter of different exigencies and thereafter, take a call regarding suitability of candidate if he suffers any criminal trial or registration of offence. The Court was of the view that the Single Judge had considered all the necessary contours of the controversy in detail and thereafter, came to the conclusion about role of appellant vis-a-vis allegations and thereafter, dismissed the petition.

The Court dismissed the appeal holding that when authorities take a view in a particular manner then scope of discretion is limited and thus there is no case of interference.[Bhagwat Singh v. State of M.P., 2022 SCC OnLine MP 457, decided on 11-03-2022]

For the appellant/petitioner: Mr Nirmal Sharma

For the respondents/State: Mr MPS Raghuwanshi 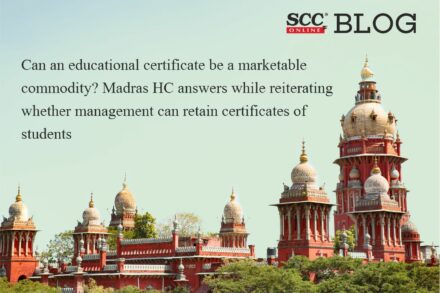 Can an educational certificate be a marketable commodity? Madras HC answers while reiterating whether management can retain certificates of students