Patna High Court: A Division Bench of Amreshwar Pratap Sahi, CJ and Ashutosh Kumar, J. disposed of the writ petition since no case was made out for the exercise of discretion under Article 226 of the Constitution of India.

The Attestation Form, with regard to the employment of the petitioner for the post of Assistant Central Intelligence Officer in the Intelligence Bureau, did not contain full particulars of his previous employment in the Intelligence Bureau Department itself where he had been earlier employed where his services had been terminated. The form had the requirement of disclosure of any employment either held by the candidate or any employment which may have been held by the candidate any time under the Central or State Government or Semi-Government or Quasi-Government body or an autonomous body or a Public Undertaking or a Private Firm or Institution.

The petitioner contended that the impugned order could not be supplemented by any reasons contained in the counter affidavit filed before the present Court and that non-supply of reasons in the order dispensing with the services of the petitioner and canceling his candidature could not be on the strength of a reason which had been brought forth through the counter affidavit. It was also contended that Clause 11(A) only created an obligation to disclose the employment that was held currently at the time of the submission of the Attestation Form.

The court held that a perusal of Clause 11(A) left no room for doubt that the requirement of disclosure obligated the candidate to furnish the entire information of any employment being held by him or having held any time an appointment of nature described therein. Non-disclosure of such a fact had a direct bearing on his employment. This fact of termination of employment in the same department, which is a highly sensitive department, therefore, could not be said to be a piece of information that was not required to be disclosed. 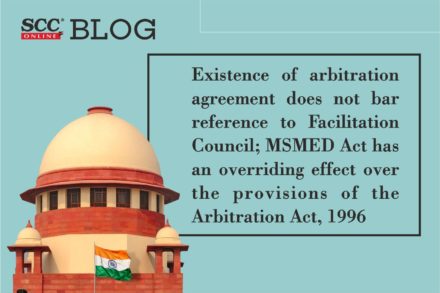 Supreme Court| Existence of arbitration agreement does not bar reference to Facilitation Council; MSMED Act has an overriding effect over the provisions of the Arbitration Act, 1996