Supreme Court: The Bench comprising of A.M. Sapre and Indu Malhotra, JJ., remanded the matter to Bombay High Court while stating that entire issue should necessarily be examined on the basis of facts and law.

In the present matter, the facts concerning the background of the case are that the appellant had filed a complaint against the respondents under the Maharashtra Ownership Flats Act for violation of several provisions of the said Act in execution of one housing project and while allotting the flats purchased by the parties in the said housing project.

Therefore, the main issue that arose was whether the High Court was justified in declining leave to file an appeal against the order of the Metropolitan Magistrate?

Hence, the Supreme Court, on the analysis and observance of the facts and submissions in the present case, concluded its decision by allowing the appeal dismissed by the High Court in order to question the legality and correctness of the order passed under Section 378(4) CrPC. The Apex Court in a very clear tone stated that the “High Court ought to have granted leave to the appellant to file criminal appeal and in consideration of the facts of the case and the High Court should have examined the entire issue on facts and law.”

High Court was requested to expedite the hearing of the appeal in lieu of the case being quite old. [Dahisar Saraswati Co-op. Housing Society Ltd. v. State of Maharashtra,2018 SCC OnLine SC 1926, decided on 12-10-2018] 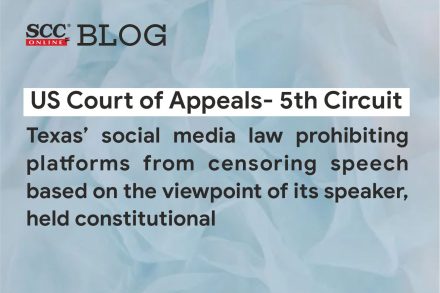 US Court of Appeals- 5th Circuit | Texas’ social media law prohibiting platforms from censoring speech based on the viewpoint of its speaker, held constitutional

NCLT: Rejects appeal for liquidation after failure of Resolution Professional and Committee of Creditors to fulfil their duties