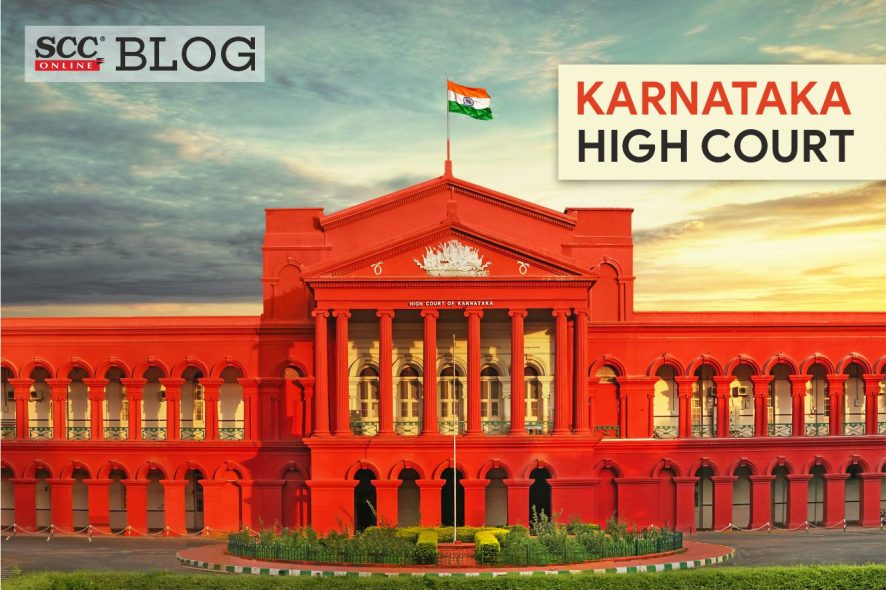 Karnataka High Court: While deciding the instant appeal for restoration assailing the order passed by the Trial Court wherein the case was dismissed due to non-prosecution, the Bench of P.N. Desai, J., observed that it is the duty of the Court to record plea of the accused by putting substance of the accusation against him. The complainant’s presence/ personal attendance at the time of recording the plea of the accused is not essential at all. It was held that simply in order to dispose of the cases, a complaint should not be dismissed when there is no necessity of the complainant’s presence.

The appellant (complainant before the Trial Court/JMFC) had filed a private complaint against the respondent/accused under the provisions of Section 138 of Negotiable Instruments Act, 1881. However, even after recording the sworn statement, the case was dismissed for non- prosecution as the complainant had not appeared before the Court.

Aggrieved with the said the dismissal, the appellant challenged the order via revision petition under Section 397, CrPC before the Sessions Judge, who while allowing the petition, directed to restore the case. The respondent/accused then filed a petition for quashment before the High Court and the same was allowed. Aggrieved with the High Court’s decision, an instant appeal was preferred.

The counsel for the appellant contended that the Trial Court did not dismiss the case on merits rather it was dismissed for default.

Per contra, the respondent argued that there was inadvertent delay in filing the appeal and that the appeal does not have any valid or detailed reasons/grounds showing the need for restoration.

Perusing the facts and contentions presented, the Court noted that the respondent/ accused did not appear before the Courts for many years. Though the case is of 2013, the respondent appeared in 2018 and when the matter was posted for recording of plea, the Trial Court/JMFC dismissed the matter due to non-appearance of the complainant.

The Court noted the delay of 44 days in filing the revision petition that was condoned by the Sessions Judge. The Court also noted the observations made in Collector (LA) v. Katiji, (1987) 2 SCC 107, wherein it was observed that, “Judiciary is respected not on account of its power to legalize injustice on technical grounds but because it is capable of removing injustice and is expected to do so”.

The Court thus pointed out that the Trial Court/JMFC did not take into consideration that the respondent/ accused was continuously dodging the Courts for 5 years after the complaint was filed and kept the case pending for the want of his appearance, and then dismissed the complaint when the appellant failed to make an appearance.

The Court pointed out Section 256, CrPC which deals with ‘non-appearance or death of the complainant’ and noted that the Court has to exercise discretion judiciously and stated that the Section’s proviso clearly indicates that if the Court is of the opinion that personal attendance of the complainant is not necessary, then the Magistrate may dispense with the attendance and proceed with the case.

Santosh Patil, Advocate, for the Appellant;

M.A. Jagirdar and G.B. Yadav, Advocates, for the Respondent.

A great nation is built on a character of its own citizens. It transforms into the character of the nation leading to its progress achieved through a value system.

Madras High Court: The Division Bench of M.M. Sundresh and R. Hemalatha, JJ., while addressing the present petition with regard to concerns arising due to online classes  quoted Swami Vivekananda,

“We want the education by which character is formed, strength of mind is increased, the intellect is expanded, and by which one can stand on one’s own feet.”

Further, explaining the concept of education, Court stated that,

“A man is both a creator and destroyer. Therefore, he is his own future. A better future can only be secured through the younger generation, existing and awaiting.”

The process of creating a good citizen has got multiple roadblocks created by various factors. Thus, Education will have to address this seminal issue without deviating towards more literacy in imparting knowledge without character.

RIGHT USE OF TECHNOLOGY IN IMPARTING EDUCATION

With the onslaught of information pouring through technology, it is imperative to make sure that the children are groomed in the right way. Further, it was added that as we know, technology as such cannot be faulted but only its wrong usage.

Present matter has raised concerns with regard to the usage of online classes hastened by the pandemic.

Online classes have become one of the necessities than an option as schools are yet to re-open.

Social Divide is another factor which unfortunately gets widened through the imparting of the present education between the rich and the poor through the varied curriculum, methodology and facilities.

At the time of filing of the writ petitions, guidelines of the Union of India and the State Government were not in existence.

Bench stated that since the Court has prefaced on the extensive and exhaustive guidelines of the Government of India and the State Government, therefore it refrains from going into the materials produced.

Hence Court only highlights the important aspects of the guidelines while concentrating on the issues flowing out of the same including the complaints made on the extensive usage by some of the overzealous institutions.

On the question of attendance, schools have been informed that it shall not be accounted as mandatory for performance evaluation purposes.

High Court on perusal of the above stated that this new form of Education is created by the technology which has been imposed upon us by the pandemic. Therefore, it should be used as an opportunity to deal with the situation until the normalcy is restored.

The Institutions along with the Teachers and Parents will have to play their respective roles with all seriousness.

Court has noted that that there are certain schools that are overburdening in conducting the examinations, making the attendance mandatory and taking classes beyond the time limit mentioned in the guidelines.

Bench does not approve of the above.

Taking care of the interest of the children is the primary duty of the Parents, Teachers, Institutions, Government and the Court.

Court is of the firm view that that the guidelines are to get the trappings of the mandatory directions.

Further, it was also stated that classes of varied categories such as Government Schools which are few in existence, aided and un-aided schools, their curriculum is also different. In view of the said, Court held that the guidelines are to be complied with by all the stakeholders.

Usage of recorded versions of online classes through local television

It is for the respective schools to adopt their mode while keeping in mind the guidelines issued. However, they can also explore the possibility of going for the recorded classes as it would ease out the pressure from the point of view of the students. Similarly, recorded versions can be sent through Whatsapp apart from being uploaded in the school portals.

Keeping in mind the interests of children, bench issued the following directions:

Bench disposed of the petitions stating that it hopes the above-laid guidelines are complied with and makes it clear that all the directions are applicable to the Schools functioning in the Tamil Nadu. [R. Bharaneeswaran v. Government of Tamil Nadu, 2020 SCC OnLine Mad 2301 , decided on 09-09-2020]

Kerala High Court: The Bench of P.V. Asha, J. allowed a petition filed by a law student granting her permission to appear for her examinations on a provisional basis subject to the question of sufficiency of her attendance being decided by her law college.

Petitioner herein was a student of 5-year LLB BA (Criminology) who was informed by the respondent law college that she is ineligible to appear for her seventh-semester examination on account of shortage of attendance. Petitioner claimed that she had got 60 per cent attendance.

Learned counsel for the petitioner Mr Syam J Sam submitted that petitioner had appeared in the internal examination for which she had paid examination fee. She had also taken up the matter for condonation, with the respondent college through Principal.

In view of the fact that the examination was scheduled to be held from 15-03-2019, the Court opined that the petitioner could be permitted to appear in the examination purely on provisional basis subject to the decision to be taken on the question of condonation of shortage of attendance.

Allahabad High Court: A Single Judge Bench comprising of Ajay Bhanot, J. dismissed the petition by stating that one illegality cannot be weighed on the illegality of some other individual.

The Court was of the view that one illegality cannot become the basis for another illegality. An individual has to succeed on the footing of his own rights and cannot base his claim on illegality committed by an authority to favour another person. Accordingly, the petition was dismissed. [Prince Namdev v. State Of U.P.,2018 SCC OnLine All 3109, Order dated 18-12-2018]

Kerala High Court: With reference to a pregnant student seeking exemption from the rule of requisite attendance in order to appear for the second semester examination in B.Ed course, the Court categorically held that “pregnancy was an optional choice and that cannot be a reason to permit a student to deviate from the requirements of a regular course of study, and the insistence to adhere to the course regulations cannot be termed to be a negation of the preferential treatment to women enshrined under the Directive Principles or in derogation of the values of motherhood.”

The petitioner was not permitted to appear for the examination being short of the minimum required attendance of 75% to which she contended that she had failed to attend the classes due to her advanced stages of pregancy and sought an exemption for the same.

The petitioner relied on a judgment of a Single Judge of the Delhi High Court in Vandana Kandari v.  University of Delhi, 2010 SCC Online Del 2341,  where in similar circumstances, it was held that no relaxation in attendance could be made, in accordance with the rules of Bar Council of India and Ordinance of the university. Referring to the Directive Principles, the Judge however observed that by depriving/detaining  a student on the ground of pregnancy  would not only be completely in negation of the conscience of the Constitution but also of the women rights and gender equality, akin to making motherhood a crime.

Dissenting from the abovesaid judgment, the Court held that the petitioner cannot be accorded any exemption from the minimum attendance requirement in order to appear for the examination, only on account of her pregancy. The Court emphasised upon the role of a teacher in nation building and that the requirement to attend minimum number of classes is to equip the students to discharge the professional duties with high standards, commitment and orientation in the chosen vocation, by way of lectures, seminars, practicals, as mere bookish knowledge is not the criteria of judging a professional.

Dismissing the petition, the Single Bench of Vinod Chandran, J, firmly held that the petitioner ought to have definitely adjusted her priorities when continuing a higher education, especially in a course which trains her to be a professional teacher. Pregnancy was an optional choice and that cannot be a reason to permit a student to deviate from the requirements of a regular course of  study.

Further, insistence to adhere to the course regulations cannot be termed as a negation of the preferential treatment to women enshrined under the Directive Principles or in derogation of the values of motherhood. Having chosen to expand her family she can be deemed to be on a sabbatical from regular studies, which cannot be turned to her advantage for wriggling out of the terms and conditions of a regular academic course. The Court observed that personal preferences and individual predilection should bow down to the larger public interest and societal obligations. [Jasmine V.G. v. Kannur University, 2016 SCC OnLine Ker 3221, decided on May 24, 2016]