Supreme Court: Sitting on the matter relating to the ambitious “Aadhaar Card” scheme propounded by the Government of India under the said scheme the Government of India is collecting and compiling both the demographic and biometric data of the residents of this country to be used for various purposes, the bench of 3 judge bench of J. Chelameswar, S.A. Bobde and C. Nagappan, JJ referred the matter to a 5-judge bench. However, the Court said that till the matter is finally decided by the larger bench, it will not be mandatory for a citizen to obtain Aadhaar Card and also, production of an Aadhaar card will not be condition for obtaining any benefits otherwise due to a citizen.

After considering the submissions made by Mukul Rohatgi, Attorney General and KK Venugopal, the Court held that the Unique Identification Number or the Aadhaar card will not be used by the respondents for any purpose other than the PDS Scheme and in particular for the purpose of distribution of foodgrains, etc. and cooking fuel, such as kerosene. The Aadhaar card may also be used for the purpose of the LPG Distribution Scheme. The Court further held that the information about an individual obtained by the Unique Identification Authority of India while issuing an Aadhaar card shall not be used for any other purpose, save as above, except as may be directed by a Court for the purpose of criminal investigation. Justice K.S. Puttaswamy (Retd.) v. Union of India, decided on 11.08.2015 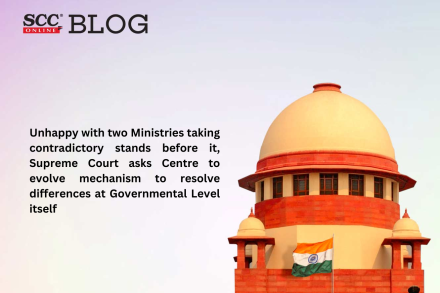 Unhappy with two Ministries taking contradictory stands before it, Supreme Court asks Centre to evolve mechanism to resolve differences at Governmental Level itself

By Prachi Bhardwaj Published on October 28, 2022

Arithmetical approach in allowing recall of witness can be dangerous

Construction workers not covered by the Factories Act, 1948 and are entitled to the welfare measure specifically provided under BOCW ACT, 1996 and Welfare Cess Act, 1996