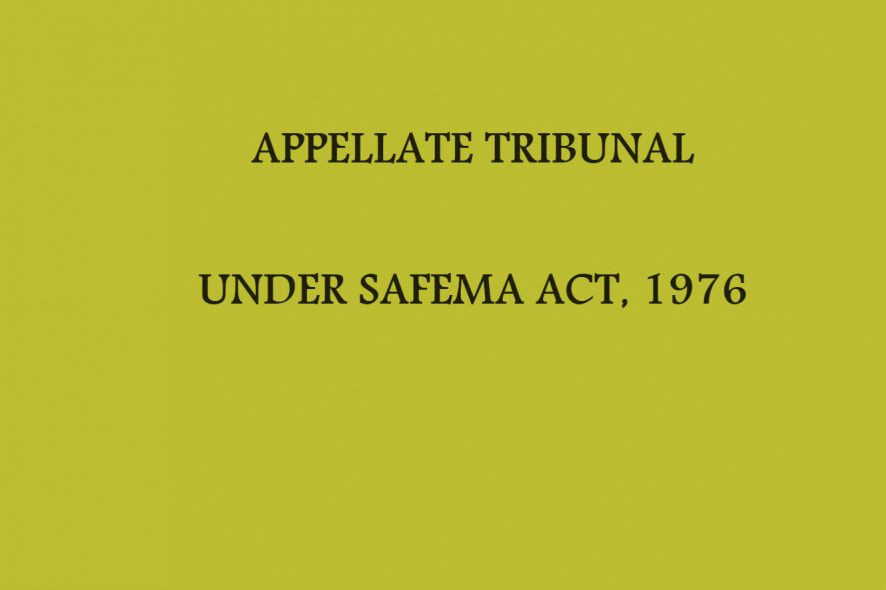 In the present case, the Appellate Tribunal had decided to decide all the appeals filed by the National Spot Exchange of India Ltd. (‘NSEL’) and by the company, 63 Moon Technologies Ltd. (’63 MTL’). The appeals filed by 63 MTL are regarding allegations of the Enforcement Directorate for offences which are yet to be framed after trial. During this pendency of the trial, the company and Jignesh Shah, the chairman of the company were restrained not to sell, alienate or create any third party rights in their assets until the final disposal of the order. Properties of NSEL have not been attached however it has been stated that the impugned orders contain serious unsubstantiated findings against them and have characterized the entire legitimate gross revenue of the appellants for the period of financial years 2008-09 to 2013-14 as “proceeds of crime”. 63 MTL was involved in operations of promoting exchanges and securities market worldwide among which Multi Commodities Exchange, was one of the subsidiaries of the erstwhile Financial Technologies India Ltd. (later reformed as 63 MTL). Multi Commodities Exchange thereafter incorporated NSEL and the entire shareholding of Multi Commodities Exchange was entirely transferred to 63 MTL. Due to shareholding by the National Agricultural Co-operative Marketing Federation of India the relevant authority under the Agricultural Produce Markets Act, 2007 prohibited NSEL from being subsidiary or having any shareholders for being recognized under the Forward Contract Regulation Act, 1952. However, it was stated that NSEL operated separately and was an independent subsidiary. In the year, 2013 it was reported that NSEL defaulted in Rs. 56 thousand crores and thus resulting in the restraining order of assets of 63 MTL and NSEL, being the wholly-owned subsidiary.

The Bombay High Court had quashed the order restraining the assets of 63 MTL stating that NSEL was not a financial establishment hence attachment of assets under the Maharashtra Protection of Interests of Depositors in Financial Establishments Act, 1999 was invalid.

The counsels representing the NSEL, Arvind Lakhawat, Siddharth Joshi and Akshay Ringe, submitted that the adjudicating authority failed to take into consideration that NSEL offered an online platform for trading of commodities, its very business model envisaged trading in commodities by way of tendering of document of title (i.e. warehouse receipt) and netting-off. As a result, the contracts traded on NSEL’s exchange platform were deemed to be forward contracts. The counsel further submitted that NSEL was promoted by MCX (and not by FTIL) on 18.05.2005. In or around September 2005 entire shareholding of MCX in NSEL was transferred to FTIL. Jignesh Shah was only occupying the position of a Non-executive Vice Chairman in NSEL.

The counsels representing the 63 MTL, Mukul Rohatgi, Dayan Krishnan, Tanvi Manchanda and Priyanka Vora, submitted that the amount of Rs 1,254.60 crores traced to NSEL are not “proceeds of crime” under Section 2(1)(u) of the PMLA as the said property is not derived, either directly or indirectly by NSEL as a result of any alleged criminal activity, on NSEL’s exchange, i.e. the default of Rs 5,600 crores. Therefore, if the aforesaid amount is not “proceeds of crime” under the PMLA, then any provisional attachment of assets of “equivalent value” of the 63 MTL by way of the provisional attachment orders is illegal and ultra vires the scheme of the Act.

For the Enforcement Directorate, Rajeev Awasthi contended that the NSEL in connivance with defaulting members has generated proceeds of crime and being the ultimate holder of NSEL, FTIL was the ultimate beneficiary of the said proceeds of crime. He also submitted that by virtue of its shareholding of 99.99 % in NSEL, FTIL was the complete authority over all the affairs of NSEL enabling it to appoint all the Directors on the board of NSEL, through them effective control over the functioning of NSEL. The NSEL board comprising Key Management Personals of FTIL (Shri Jignesh Shah) had all the authority to frame the bye-laws, rules, and regulations of the company. Thus, FTIL was fully responsible for the functioning of NSEL and the Board of Directors of NSEL was aware of the situation at NSEL.

Tribunal upon perusal of the records and the facts of the case, stated that “the former MD & CEO of NSEL and his managing staff were responsible for the crisis as well as the borrowers who have benefited by the prosecution and the money of the investment has gone to them.” At the same time, the Tribunal was unwilling to provide clean chit to Jignesh Shah as it is a separate matter of trial and since the matter is under investigation at the Bombay High Court. The Tribunal thereafter directed that the provisional attachment orders of 63 MTL shall be quashed subject to Jignesh Shah and his family furnishing indemnity bonds.[63 Moons Technologies Ltd. v. Deputy Director, Directorate of Enforcement, Mumbai, 2019 SCC OnLine ATPMLA 39, decided on 17-09-2019]

Utt HC | Non-disclosure of major ailments before marriage amounts to ‘cruelty’ although the aliments itself are no grounds for divorce; dissolution of marriage upheld

All HC | Onus of proving ingredients under the First Exception, S. 499 IPC is on the accused; Defence being a question of fact cannot be claimed at the stage of issuance of summons