Tripura High Court: S. Talapatra, J. allowed a writ petition challenging a memorandum for a compassionate appointment being rejected and non-payment of compensation.

The Petitioner had approached the Court to quash a memorandum dated 21-11-2017 whereby his prayer for compassionate appointment under the die in-harness scheme was rejected by the respondents. The Court took note of the fact that at the time of death of the deceased employee, the petitioner was minor and hence incapable of being employed. However, the respondents, in a communication dated 28-11-2018 had promised for a payment of Rs 50,000 as an alternative to the compassionate appointment.

Learned Advocate on behalf of the Petitioner, A. Pal, submitted that the payment of Rs 50,000 which ought to have been paid immediately after the demise of the employee, had not yet been made towards the family. Hence, the Petitioner had prayed for payment of interest over the aforementioned amount.

Learned Advocate on behalf of the respondent, N. Chowdhury, contended that usually there is no provision for payment of interest on the financial benefit under a die-in-harness scheme.

The Court opined that there had been a considerable delay in payment of the compensation and in order to recoup the loss, the respondents were directed to pay 5 percent simple interest over the amount of Rs 50,000 to the petitioner within a period of three months from the date of furnishing the copy of this order.[Jaharam Tripura v. State of Tripura, 2019 SCC OnLine Tri 142, decided on 03-05-2019]

HP HC | Legislative intent of NI Act, 1881 is not to send the people to suffer incarceration but to execute recovery of cheque amount by showing teeth of penalty loss; conviction set aside 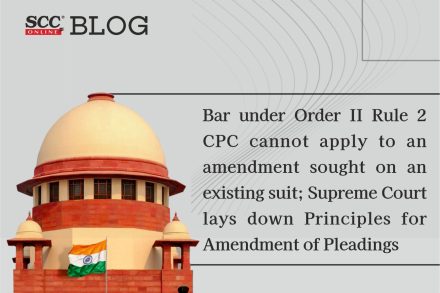 Bar under Order II Rule 2 CPC cannot apply to an amendment sought on an existing suit; Supreme Court lays down Principles for Amendment of Pleadings