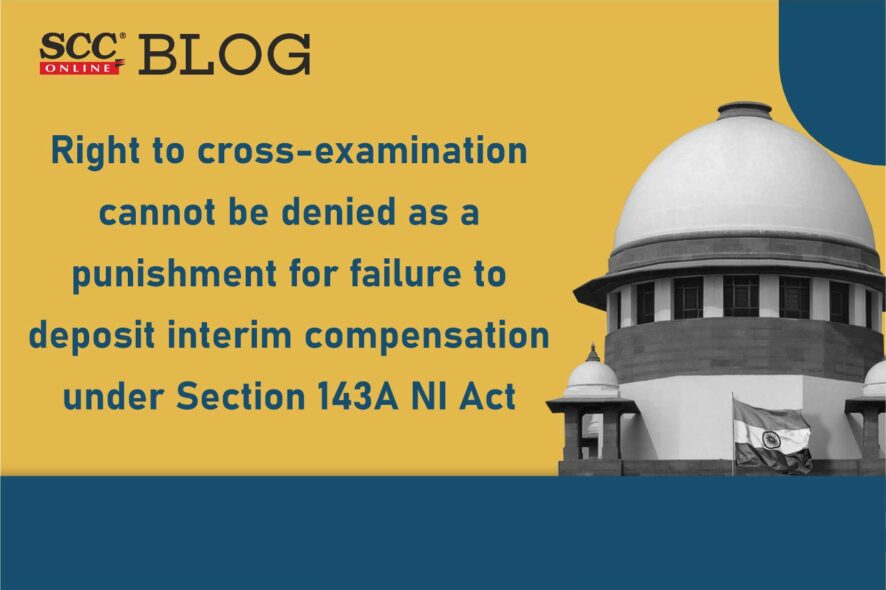 Supreme Court: In a case where an offender under Section 138 of the Negotiable Instruments Act, 1881 (NI Act) was denied the right to cross-examine a witness upon failure to deposit the interim compensation under Section 143A of NI Act, the bench of UU Lalit*, S. Ravindra Bhat and Sudhanshu Dhulia, JJ has held that any such order foreclosing the right would not be within the powers conferred upon the court and would, as a matter of fact, go well beyond the permissible exercise of power.

The Court, upon reading the provision in question, did the following pointwise break down of Section 143A of NI Act:

It was, hence, observed that the remedy, the method, and modality of recovery of interim compensation is clearly delineated by the Legislature.

“It is well known principle that if a statute prescribes a method or modality for exercise of power, by necessary implication, the other methods of performance are not acceptable.”

The Court was, hence, of the opinion that the concerned provision nowhere contemplates that an accused who had failed to deposit interim compensation could be fastened with any other disability including denial of right to cross-examine the witnesses examined on behalf of the complainant.

Karnataka High Court: M. Nagarprasanna J. allowed a petition filed under Section 482 of Criminal Procedure Code, 1973 (CrPC) seeking quashing of the impugned order passed by the Additional Chief Metropolitan Magistrate. Therefore, the magistrate court directed that interim compensation be given as per the “conduct of the accused” for the applications filed under Section 143-A of the Negotiable Instruments Act, 1881 (NI Act).

The observation came after the Court noticed that it was “flooded with litigation with regard to grant of compensation under Section 143-A of the NI Act by criminal courts”. Noticing that in several cases discretion is exercised for grant of compensation and in several other cases there are no reasons for exercise of such discretion, the Court found it necessary to direct Magistrates to consider the conduct of the accused at the outset while considering applications filed under Section 143-A of the Act.

“If the accused has been unnecessarily evading the proceedings by seeking adjournments, consideration of the application would become imperative as the amendment itself is introduced to compensate such payees of delay tactics adopted by unscrupulous drawers of cheques.”

A complaint was filed invoking Section 200 of the CrPC for offences punishable under Section 138 of the NI Act when the cheque of Rs 5,56,71,208/- was dishonored on the grounds of want of sufficient funds in the account.

The trial court, after considering the facts, gave the impugned order of granting 10% interim compensation in terms of section 143-A of the NI Act.

Analysis of the court

Firstly, the court noted that Section 143-A of the Act was introduced for a specific purpose. The purport of the amendment was that the court may, in certain circumstances, award interim compensation which shall not exceed 20% of the amount of the cheque and such interim compensation can be permitted to be withdrawn in terms of the said amendment. Therefore, the court in such cases directs the accused to pay interim compensation under section 143-A. In circumstances when the accused would not deposit the amount directed by the Court, it is recoverable by initiating proceedings under Section 421 of the CrPC. Therefore, the provision which is a directory in the beginning snowballs into becoming mandatory and penal by the time the realization of the deposit amount is made.

The Court, further, explained the following “two-fold discretion” that are sine qua non for an order to be passed by the Magistrate while considering the application under Section 143-A of the NI Act.:

The court opined that application of mind and passing of a reasoned order of grant of compensation becomes necessary in penal cases that ensue an accused who failed to comply with the order granting 20% compensation as the complainant is given several remedies of recovery which result in the accused being taken into custody. Hence, such orders which result in such penal consequences should be rendered by giving cogent reasons which would demonstrate the application of mind, and such orders should be passed only after hearing the accused in the matter.

In the case at hand, involving the amount of Rs. 55 Lakhs, it was observed that the order of the Magistrate did not bear any reason. Hence, the Court held that the Magistrate after analyzing the conduct of the accused should grant compensation which would vary from 1% to 20% after recording necessary reasons and therefore set aside the impugned order and remitted back the matter to the hands of themagistrate.

Dinesh SK, Advocate, for the Respondent.