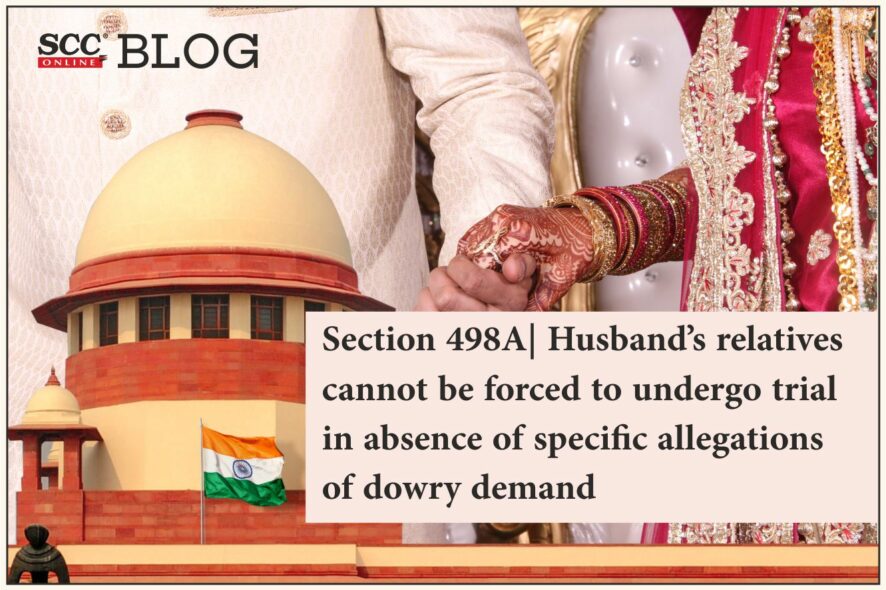 Supreme Court: In a dowry demand and harassment case, where a woman had lodged criminal complaint against her husband and in-laws but  no specific role was attributed to the in-laws, the bench of SA Nazeer and Krishna Murari*, JJ has held that it would be unjust if the in-laws are forced to go through the tribulations of a trial and that general and omnibus allegations cannot manifest in a situation where the relatives of the complainant’s husband are forced to undergo trial. The Court observed that a criminal trial leading to an eventual acquittal also inflicts severe scars upon the accused, and such an exercise must therefore be discouraged.

The Court also observed that while incorporation of section 498A of IPC was aimed at preventing cruelty committed upon a woman by her husband and her in-laws, by facilitating rapid state intervention, it is equally true, that in recent times, matrimonial litigation in the country has also increased significantly and there is a greater disaffection and friction surrounding the institution of marriage, now, more than ever. This has resulted in an increased tendency to employ provisions such as 498A IPC as instruments to settle personal scores against the husband and his relatives

In the case at hand, general allegations were levelled against the in-laws. The complainant alleged that ‘all accused harassed her mentally and threatened her of terminating her pregnancy’. Furthermore, no specific and distinct allegations have been made against either of the Appellants herein

The Court observed that

“This simply leads to a situation wherein one fails to ascertain the role played by each accused in furtherance of the offence. The allegations are therefore general and omnibus and can at best be said to have been made out on account of small skirmishes.”

The Court, hence, held that allowing prosecution in the absence of clear allegations against the in-laws would simply result in an abuse of the process of law.