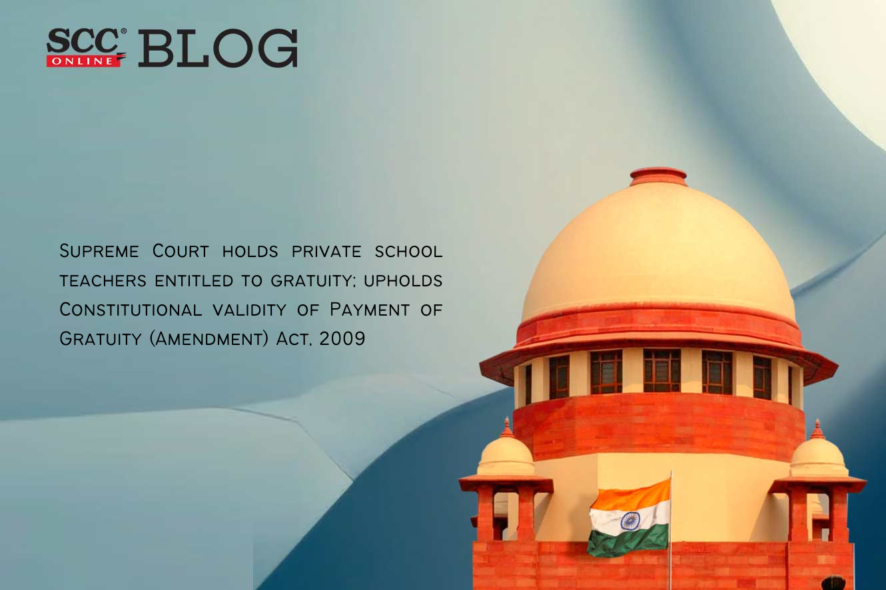 Supreme Court: While upholding the Constitutional validity of the Payment of Gratuity (Amendment) Act, 2009, the Division Bench of Sanjiv Khanna* and Bela M. Trivedi, JJ., held that the Amendment seeks to bring equality and give fair treatment to the teachers. It can hardly be categorised as an arbitrary and high-handed exercise.

Noticeably, the aforesaid Amendment Act was introduced to extend the benefit of gratuity to the teachers by including them in the definition of “employee”, who were earlier deprived of it. The Court said,

“Private schools, when they claim a vested right arising from the reason of defect, should not succeed, for acceptance would be at the expense of teachers who were denied and deprived of the intended benefit.”

The Act requires payment of gratuity to an employee after he has rendered continuous service for not less than 5 years, on his superannuation, retirement or resignation or on his death or disablement due to accident or disease. Noticeably, by the Notification No. S-42013/1/95-SS.(II) issued by the Ministry of Labour and Employment, Government of India on 03-04-1997, the provisions of the Act have been made applicable to the educational institutions with ten or more employees.

Therefore, the private schools being educational institutions, in which ten or more persons are employed, became liable to pay gratuity to their employees as per the provisions of the Act. However, some private schools raised a dispute claiming that the teachers in educational institutions or schools are not “employee” as defined in Section 2(e) of the Act. The Supreme Court in Ahmedabad Private Primary Teachers’ Association v. Administrative Officer, (2004) 1 SCC 755, held that teachers who impart education to students are not “employee” under Section 2(e) of the Act as they do not perform any kind of skilled, unskilled, semi-skilled, manual, supervisory, managerial, administrative, technical or clerical work.

Referring the judgment in Ahmedabad Private Primary Teachers’ Association (supra) in the object and reasons for Amendment, the Government introduced the Payment of Gratuity (Amendment) Act, 2009 to cover the definition of “employee” to all kinds of employees. The Amendment Act inserted a new Section 13A and also Clause (e) to Section 2 of the Act with retrospective effect from 03-04-1997 to confer, with retrospective effect, benefit of gratuity to the teachers who have rendered continuous service for not less than 5 years.

The petitioners contended that the legislation vide the Amendment Act 2009 overrules the judicial decision in Ahmedabad Private Primary Teachers’ Association (supra) and violates the doctrine of separation of powers. Rejecting the aforesaid argument, the Court observed that the legislation in question rather rectifies the infirmities and defects pointed out by the Court in the aforesaid decision, and the amended clause (e) to Section 2, defining the word “employee” and the newly inserted Section 13A with retrospective effect, effectuate and catalyse the object and purpose of the Notification No. S-42013/1/95-SS.(II).

“Overruling assumes a decision based on the same law. Where the law, as in the present case, has been amended, and the defects have been removed or cured, the law changes, and therefore, the earlier interpretation is no longer applicable and becomes irrelevant.”

Noting that the decision in Ahmedabad Private Primary Teachers’ Association (supra) even acknowledged and prompted the legislature to enact a legislation granting the benefit of gratuity to teachers, who had been excluded because of the legal flaw, the Court held that the amendment enforces and gives effect to what was intended by the notification, but could not be achieved on account of the technical and legal defect. The lacuna, a distortion in the language that had the unwitting effect of leaving out teachers, has been rectified so as to achieve the object and purpose behind the issuance of the notification, making the Act applicable to all educational institutions.

Whether the Amendment financially confiscatory?

The private educational institutions also assailed the Amendment on the ground that they would be liable to pay gratuity for a period of service prior to 03-04-1997, and, therefore, the amendments are unconscionable and tyrannous, equally fallacious and financially confiscatory.  The Court, calling the aforesaid argument fallacious, observed that the argument, predicated on past liability, deserved to be rejected as there are upper-cap limits on payment of gratuity; i.e., the payment towards gratuity cannot exceed the specified amount, even if the employee would be entitled to higher amount in view of the years of the service rendered to the employer.

Relying on T.M.A. Pai Foundation v. State of Karnataka, (2002) 8 SCC 481, some schools argued that charging of capitation fee or profiteering by educational institutions is impermissible and they do not have capacity and ability to pay gratuity to the teachers.

Finding the aforesaid argument unapt and parsimonious, the Court clarified the decision in T.M.A. Pai Foundation (supra) by holding that the judgment does not state that the teachers should not be paid gratuity; in fact, the judgment holds that the educational institutions are entitled to reasonable surplus to meet the cost of expansion and augmentation of the facilities and this does not amount to profiteering.

The Court noted that though it is possible that in some States there are fee fixation laws which will have to be complied with, but compliance with these laws does not mean that the teachers should be deprived and denied gratuity, which they were/are entitled to receive as other employees of an educational institution. The Court said that regulation of fee is to ensure that there is no commercialisation and profiteering, and the effect is not to prohibit a school from fixing and collecting ‘just and permissible school fee’. The Court added,

“We would not accept any attempt to circumscribe and limit the power vested with the sovereign legislature, thereby putting fetters when such fetters are not prescribed by the Constitution. When and which cases to exercise the power has to be left to the legislature.”

The Court, while holding that the Amendment retroactive, observed that the provisions of the Act, even post the retrospective amendments, will apply only to those teachers who were in service as on 03-04-1997, and at the time of termination have rendered service of not less than 5 years. The Court said that the period of 5 years may be partly before 03-04-1997, as the date on which the person was employed does not determine the applicability of the PAG Act.

However, the date of termination of service, should be post the enforcement date. The entire length of service, including the service period prior to 03-04-1997, is to be counted for the purpose of computing the entitlement condition of 5 years of service.

Whether the Amendment violative of Fundamental Rights?

The schools had claimed violation of Articles 14, 19(1)(g), 21 and 300-A of the Constitution. Holding that the Constitutional provisions are not violated, the Court said that to deny gratuity benefits to the teachers upon enforcement of the notification No. S-42013/1/95-SS.(II) was itself an anomaly which mandated correction.

The Court observed that the teachers were discriminated to be denied benefit of gratuity, a terminal benefit, which was payable to other employees of the private schools/educational institutions, including those engaged in administrative and managerial work. The amendment with retrospective effect remedies the injustice and discrimination suffered by the teachers on account of a legislative mistake.

Whether the Amendment violated other enactments?

The last contention raised by the private schools and writ petitioners was predicated on the enactment of the Repealing and Amending Act 2016, by virtue of which the Amendment Act 2009 was repealed. Once again, rejecting such contention, the Court opined that the argument overlooked Section 6A of the General Clauses Act, 1897 and Section 4 of the Repealing and Amendment Act, which states that the repeal shall not affect any of the enactment in which the repealed enactment has been applied, incorporated or referred to. It also states that the Repealing Act shall not affect the validity, invalidity, effect or consequences of anything already done or suffered, or any right, title, obligation or liability already acquired, accrued or incurred etc.

Hence, the Court vacated the partial stay on the Amendment Act in the order dated 31-01-2020 passed in Saint Xaviers High School v. Jayashree Shamal Ghosh, (SLP (C) No. 2235 of 2020) or in any other case. The appeals and the petition were dismissed.

Orissa High Court:  A Division Bench of S K Mishra and Savitri Ratho, JJ., answered both the questions posed before it elaborately.

The present petition was filed to resolve the conflict between the reported cases of Abhaya Charan Mohanty v. State of Orissa; 2003 (Supp.) OLR-882 and Bhagaban Jena and others v. State of Orissa; 2007 (1) OLR-598. Apparently, both the aforesaid reported cases were decided by different Single Benches of the Court and there appears to be a conflict of opinion regarding delay in filing the application under Section 37 (1) of the Orissa Consolidation of Holdings and Prevention of Fragmentation of Land Act, 1972 (in short “OCH & PFL Act”).

Section 37 OCH & PFL Act do not provide for any limitation for filing an application under Section 37 of the OCH & PFL Act. It is also apparent from the provisions itself that the Consolidation Commissioner as well as the Director of Consolidation can suo motu examine the regularity of the proceeding or as to the correctness, legality or propriety of any order passed by such authority in the case or proceedings and may after allowing the parties concerned a reasonable opportunity of being heard make such order as it thinks fit.

The Court relied on judgment Gulzar Khan v. Commissioner of Consolidation and others; 1993(II) OLR-194 and observed that the power under Section 37 of the OCH & PFL Act is unfettered and can be exercised to render justice to some really hard-pressed people who are without a remedy. Such power has to be exercised in a reasonable manner and reasonable exercise of power inheres in its exercise within a reasonable time.

It was also observed that the power to call for records by the Director or Commissioner Consolidation has been provided to give relief to some persons who are hard-pressed having right but without effective forum of remedy. It is also provided that this power is a suo motu power and which can be exercised by the Commissioner or Director without any application or with an application of an aggrieved party.

The Court thus held “(1) The Commissioner/Director can entertain a petition at any point of time as there is no period of limitation has been prescribed for the same under Section 37 of the OCH & PFL Act.

(2) What is a reasonable time as it is seen from the reported cases referred to above that in appropriate case even after 27 years the Revisional Authorities have exercised their suo motu power to correct a grave error or injustice perpetuated.”

The Court further observed with regard to reasonable time that it may extend even to 20 to 30 years also in cases where the facts of the case involved any of the following factual/legal aspects:-

The Court further added that “this list is not exhaustive but is only illustrative. So, we answer the second point that “what is a reasonable time” in approaching the Court, is in fact a question of fact depending on the peculiar facts of each and every case and no strait jacket formula can be provided”.