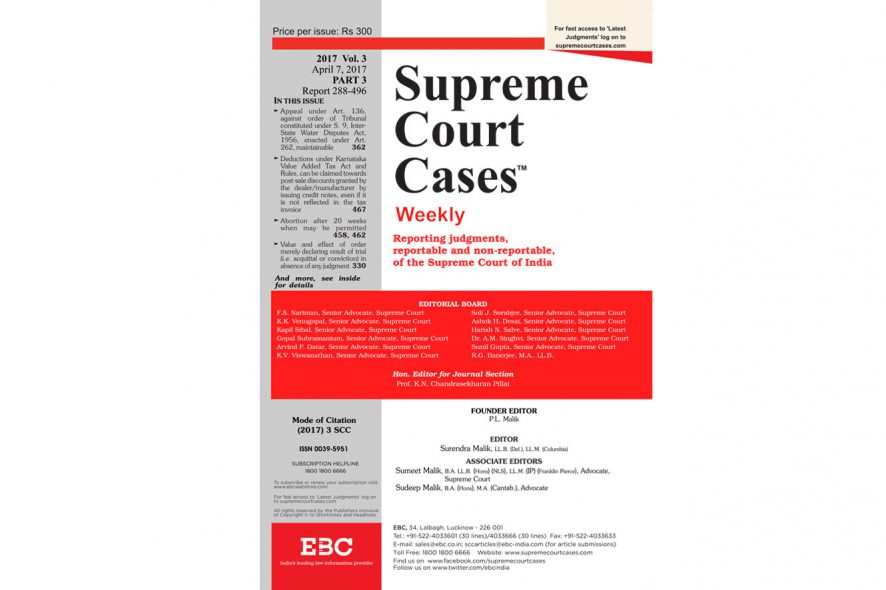 Armed Forces — Misconduct — Desertion: Respondent, a Constable in Central Industrial Security Force, intentionally disobeyed the orders of his superiors and deserted the Force for a period of 5 days, such desertion, was an act of gross misconduct. Hence, respondent deserved to be punished suitably but High Court erred in reappreciating the evidence and interfering with the order of disciplinary authority (affirmed by appellate and revisional authorities) whereby respondent was found guilty of the said charge and dismissed from service. However, dismissal modified to compulsory retirement. [Central Industrial Security Force v. Abrar Ali, (2017) 4 SCC 507]

Army Act, 1950 — S. 20(3) r/w R. 17, Army Rules, 1954 — Dismissal — Sustainability: In this case involving allegations of involvement in fraudulent recruitment were proved against appellant, provisions of Army Act, Rules thereof as well as mandate of natural justice were duly complied with before passing order of dismissal. Hence, no perversity discernible in order of AFT affirming order of dismissal passed by GOC, however, dismissal substituted with discharge. [S. Muthu Kumaran v. Union of India, (2017) 4 SCC 609]

Constitution of India — Art. 129 — Recovery of money illegally collected from public by contemnors: Conditions of interim bail required that contemnors paid instalment amounts at regular intervals fixed by Court and contemnors repeatedly seeking relaxations in payment of instalment amount rejected by Court thus, contemnors making payment of instalments before due dates to avoid being taken back into judicial custody. Attachment of Amby Valley property of contemnors, directed during proceedings dt. 6-2-2017, as it was considered sufficient to realise whole amount due from contemnors. [SEBI v. Sahara India Real Estate Corpn. Ltd., (2017) 4 SCC 595]

Constitution of India — Arts. 16(4-A), 14 and 335 — Exercise of power under Art. 16(4-A) — Parameters for — Consequential seniority — When may be provided for: Determination of “inadequacy of representation”, “backwardness” and “overall efficiency” is mandatory for exercising power under Art. 16(4-A). Mere fact that there is no proportionate representation in promotional posts for reserved category candidates, not by itself sufficient to grant consequential seniority to promotees who are otherwise junior. In absence of the above mandatory exercise prior to exercising power under Art. 16(4-A), “catch-up” rule fully applies. [B.K. Pavitra v. Union of India, (2017) 4 SCC 620]

Constitution of India — Pt. III — Breach of fundamental right — Scope of relief: Limiting relief to only monetary quantification might be done if breach is not capable of being remedied. Law intends nothing impossible but when it is in realm of possibility, denial of relief hurts majesty of justice. [S. Krishna Sradha v. State of A.P., (2017) 4 SCC 516]

Constitution of India — Sch. VII List III Entry 25 and Arts. 19(1) (g) & (6) and 30 — “Education” — Scope of, in said Entry 25: “Education” in said Entry 25 includes establishment and administration of educational institution. “Administration” takes within its sweep regulation of activity of employment by an educational institution irrespective of whether it is established by State, its instrumentalities or private sector (non-State actors). Certain aspects of establishment and administration of colleges by non-State actors have always been regulated by legislature. Both Parliament and State Legislatures can legislate on these aspects. [Mahatama Gandhi Mission v. Bhartiya Kamgar Sena, (2017) 4 SCC 449]

Contempt of Court — Exercise of Contempt Jurisdiction: Grant of relief beyond relief granted in order/judgment contempt/non-implementation of which was alleged, not permissible. [Youth Services & Sports Department v. Sanjay Gupta, (2017) 4 SCC 571]

Criminal Procedure Code, 1973 — Ss. 207/238 — Compliance with S. 207 — Necessity of — For ensuring fair trial by giving due opportunity to accused to defend himself: In this case of stealing of “source code” of software relating to data recovery in computers, conditional order was passed for providing seized hard discs to accused, to enable him to defend his case but there is apprehension of prosecution that if the documents are supplied at instant stage, appellant may misuse the same. Court observed that it is but obvious that in order to prove his defence, copies of seized CDs need to be supplied to appellant. Right to get such copies is statutorily recognised under S. 207 CrPC, which is the hallmark of a fair trial, that every document relied upon by prosecution has to be supplied to defence/accused at the time of supply of charge-sheet to enable such accused to demonstrate that no case is made out against him and also to enable him to prepare his cross-examination and defence strategy. In view of opinion of expert, it needs to be ensured, that appellant, when given the cloned copy of hard disk, is not able to erase or change or remove the same. If that can be achieved by putting some safeguards, it would be the ideal situation inasmuch as provisions of S. 207 CrPC, which ensure fair trial by giving due opportunity to the accused to defend himself, shall be fulfilled and apprehension of prosecution would also be taken care of. [Tarun Tyagi v. CBI, (2017) 4 SCC 490]

Family and Personal Laws — Guardians and Wards — Custody of Child/Minor: Interim directions issued by Supreme Court for periodical shifting of stay of child with mother during vacations or holidays as child was admitted to a school by father. [Vivek Singh v. Romani Singh, (2017) 4 SCC 573]

Karnataka Stamp Act, 1957 (34 of 1957) — Ss. 33(2) proviso (b), 33(1) and 2(1)(e) — Examination and impounding of instruments not duly stamped: Officer delegated by High Court Judge under proviso (b) to S. 33(2) is only permitted and required to examine whether stamp is of proper amount, bears proper description and is affixed and used according to law, and the stamp duty payable on the same must be determined only with reference to the terms of the instrument. Said Officer’s jurisdiction does not extend to adjudication of nature and character of instrument. Disputed question of nature and character of instrument has to be examined judicially by the competent court according to law. At best delegatee Officer send a report to the court expressing his views on a document which is subject to final determination by the court. Word “examination” has to be given restricted meaning in consonance with scheme of the Act. [Black Pearl Hotels (P) Ltd. v. Planet M. Retail Ltd., (2017) 4 SCC 498]

Penal Code, 1860 — Ss. 304-B, 306, 498-A and 302 r/w S. 34 — Murder alleged within 7 yrs of marriage — Bride found dead in a well: As no marks of any physical injury found on the body of victim, theory that deceased was done to death earlier and thereafter her body was thrown into well, was rightly not accepted by courts below and prosecution also completely failed to prove its case against husband and mother-in-law, hence, High Court rightly upheld their acquittal. [Ananda Bapu Punde v. Balasaheb Anna Koli, (2017) 4 SCC 642]

Penal Code, 1860 — Ss. 326 and 448 — Acid attack: Respondent who poured a bottle of acid over victim’s head was convicted by trial court under Ss. 326 and 448 IPC and sentenced to suffer RI for 1 yr with fine of Rs 5000 with default clause under S. 326 IPC and to pay a fine of Rs 1000 under S. 448 IPC with default clause. However, High Court, while maintaining sentence of fine for both offences, modified the sentence of imprisonment under S. 326 IPC to the period already undergone by accused of 30 days. Sentence imposed by High Court set aside and sentence of RI for 1 yr, restored by Supreme Court. [Ravada Sasikala v. State of A.P., (2017) 4 SCC 546]

Prisons, Prisoners and Probation of Offenders — Parole/Remission/Premature release/Furlough — Release on parole — When justified: Parole sought by petitioner to enable him to participate in his mother’s last rites, keeping in view urgency of matter, conditional order directing release of petitioner, on parole, for 20 days, passed. [Parasmal Lodha v. DG of Police, (2017) 4 SCC 569]

Service Law — Promotion — Criteria/Eligibility — Annual confidential report (ACR): Though, ACR forms part of service record which is required to be sent to Selection Committee for consideration, but officer cannot be prejudiced merely because his officers delayed writing it. Further held, prescription for writing ACR as per the Rules concerned was only directory and not mandatory. [P. Sivanandi v. Rajeev Kumar, (2017) 4 SCC 579]

Service Law — Recruitment Process — Judicial review/Validity: Selection process initiated despite stay order of competent tribunal/court, invalid. A competent judicial authority having jurisdiction over the matter having stayed the process of selection, any selection made notwithstanding the continuance of the stay order must not be sustained. Hence, quashment of such selection process, affirmed. [Christopher Nelson v. UPSC, (2017) 4 SCC 585]

Service Law — Reinstatement/Back Wages/Arrears — Arrears — Entitlement — Date of reckoning: Respondent-petitioners held entitled to minimum pay scale from date of their appointment and arrears payable for period of three years and two months prior to date of their filing petition in terms of order dt. 1-4-2013 passed by High Court which was implemented by State Government subject to overriding condition that arrears would be payable w.e.f. 1-1-2014. Following dictum by Constitution Bench in Umadevi (3), (2006) 4 SCC 1, held, arrears would be payable from date of impugned judgment i.e. 1-4-2013. [State of Haryana v. Mohinder Singh, (2017) 4 SCC 587]

Service Law — Termination of Service — Judicial Review/Interference by Court/Validity — Illegal termination: In this case there was regular appointment of respondent on condition that she would claim no right in event V succeeded in case filed by her and V reinstated on 14-7-2003 (respondent relieved on 15-7-2003) and superannuating on 31-8-2004. Termination of services of respondent found to be in violation of principles of natural justice and hence invalid. Where termination is illegal, respondent in normal course would be entitled to reinstatement with all consequential benefits from date of termination order. However, considering respondent’s conditional appointment, she is entitled to reinstatement w.e.f. 1-9-2004 and 50% back wages from then till reinstatement (since she had not worked for that period). [Municipal Council, Nangal v. Aruna Saini, (2017) 4 SCC 645]

Service Tax — Liability to pay tax — Packaging of goods — Nonexigibility of, to service tax prior to 16-6-2005 — “Packaging of goods” and “packaging of cargo” — Distinction between, explained: The amendment to the Finance Act, 1994 by insertion of S. 65(76-b) and S. 65(105)(zzz-f) with effect from 16-6-2005 making “packaging activity” exigible to service tax, is sufficiently indicative of legislative intent that packaging activity is different from cargo handling activity. Further, cargo is understood to denote goods which are ready for transportation whereas packaging of goods is a stage prior i.e. before they become cargo. [Signode India Ltd. v. CCE & Customs, (2017) 4 SCC 613]

Specific Relief Act, 1963 — Ss. 9 and 16 — Suit for specific performance of agreement for sale of immovable property: Preliminary objection regarding non-maintainability of suit on ground of plaintiff’s failure to first seek declaration that termination of agreement by defendant vendor was bad in law as raised for first time in appeal before Supreme Court, cannot be allowed. [A. Kanthamani v. Nasreen Ahmed, (2017) 4 SCC 654]