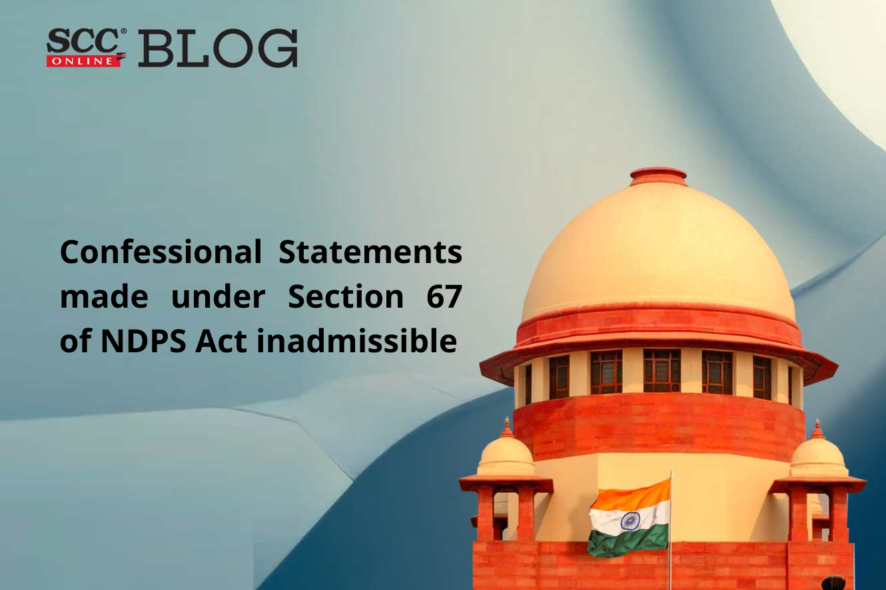 Although the Court reiterated that a confessional statement made under Section 67 of the Narcotic Drugs and Psychotropic Substances Act, 1985 (NDPS Act) is inadmissible, it found other materials against the respondent, sufficient to indicate his involvement in the alleged crime.

The instant appeal had been filed by the Narcotics Control Bureau (NCE) to assail the impugned order of the Delhi High Court granting post-arrest bail to the respondent. The respondent is facing trial for the offences under Sections 8/22 and 29 of the NDPS Act.

The NCB had recovered a parcel containing 50,000 Tramadol tablets weighing 20 kgs on the basis of secret information stating that one Gaurav Kumar Aggarwal in Agra had booked a parcel suspected to contain NRX tablets to be delivered to one Manoj Kumar (respondent herein) at Ludhiana, Punjab. The accused, Gaurav Kumar Aggarwal revealed that the recovered drug was booked by the respondent from one Promod Jaipuria, a resident of Jaipur.

To unveil the whole racket, NCB conducted a raid at the godown of Promod Jaipuria during which a cache of drugs covered under the NDPS Act, was recovered, which included 6,64,940 tablets of different psychotropic substances including Tramadol, Zolpidem, and Alprazolam tablets/capsules weighing around 328.82 Kgs, 1400 Pazinc Injections amounting to 1.4 ltrs and 80 Corex Syrup bottles weighing 8 ltrs. Another 9,900 tablets weighing 990 gms. were recovered during the search conducted by the NCB officials at the premises of the co-accused, Manoj Kumar at Ludhiana.

NCB argued that the High Court had completely overlooked the fact that it was on the basis of the disclosures made by the respondent himself that huge quantities of narcotic drugs and injections were seized from the godown of the co-accused, Promod Jaipuria who was subsequently arrested by the Department; therefore, the High Court had committed a grave error by not applying the terms and conditions imposed under Section 37 of the NDPS Act.

On the contrary, the respondent submitted that the consignment in question was neither booked by him nor for him and that he had no connection with the other co-accused persons. Further, no recovery was made from him and nothing was found in the search conducted at his residence and shop.

Provisions for Bail under NDPS Act

“(i) the Public Prosecutor ought to be given an opportunity to oppose the application moved by an accused person for release; and

(ii) if such an application is opposed, then the Court must be satisfied that there are reasonable grounds for believing that the person accused is not guilty of such an offence.

Additionally, the Court must be satisfied that the accused person is unlikely to commit any offence while on bail.”

Relying on Collector of Customs v. Ahmadalieva Nodira, (2004) 3 SCC 549, and State of Kerala v. Rajesh, (2020) 12 SCC 122, the Court stated that the expression “reasonable grounds” in Section 37 (1) (b) would mean credible, plausible and grounds for the Court to believe that the accused person is not guilty of the alleged offence.

The Court clarified that the entire exercise that a court is expected to undertake at the stage of bail under Section 37 of NDPS Act is to see the availability of reasonable grounds for believing that the accused is not guilty of the offences that he has been charged with and that he is unlikely to commit an offence under the Act while on bail.

Admissibility of Confessional Statements made under S. 67 NDPS Act

The Court opined that the High Court could not be faulted for holding that NCB could not have relied on the confessional statements of the respondent and the other co-accused recorded under Section 67 of the NDPS Act in the light of law laid down in Tofan Singh v. State of T.N., (2013) 16 SCC 31, wherein a confessional statement recorded under Section 67 of the NDPS Act has been held to be inadmissible in the trial of an offence under the NDPS Act.

Therefore, the Court held that the admissions made by the respondent while in custody to the effect that he had illegally traded in narcotic drugs, would have to be kept aside.

Considering the other materials submitted by NCB to contest the bail of the respondent, the Court noted the following:

Hence, the Court opined that even dehors the confessional statement of the respondent and the other co-accused recorded under Section 67 of the NDPS Act, the other circumstantial evidence brought on record by the appellant-NCB ought to have dissuaded the High Court from exercising its discretion in favour of the respondent and concluding that there were reasonable grounds to justify that he was not guilty of such an offence under the NDPS Act.

Calling the observation made in the impugned order that since nothing was found in the possession of the respondent, he is not guilty of the offence he had been charged with a premature assumption, the Court stated that the narrow parameters of bail available under Section 37 of the Act has not been satisfied in the instant case. Further, the Court stated,

“The length of the period of his custody or the fact that the charge-sheet has been filed and the trial has commenced are by themselves not considerations that can be treated as persuasive grounds for granting relief to the respondent under Section 37 of the NDPS Act.”

In the backdrop of above, the Court set aside the impugned order releasing the respondent on post-arrest bail. The bail bonds were declared cancelled and the respondent was directed to be taken in custody forthwith.

For the Respondent: P.K. Jain, Advocate-on-Record

The criminal petition i.e. CRLMC was filed by the petitioners under Section 482 Criminal Procedure Code i.e. Cr.P.C. to challenge the orders dated 06-09-2020/08-09-2020, 02-03-2021 and 03-05-2021 passed by the  Sessions Judge-cum-Special Judge, Malkangiri. The present application was filed by the State seeking recall of order dated 18-11-2021 passed in the above CRLMC mainly on the ground that such order was obtained by the accused petitioners by misleading the Court.

Counsel for petitioners submitted that the petition (I.A.) is not maintainable in law for the reason that as per Section 362 of Cr.P.C., the Court has no power to recall its own order after the same has been pronounced as it would amount to sitting in appeal over its own order.

Coounsel for respondents submitted that the averments contained in the CRLMC petition are product of misrepresentation of facts, inasmuch as, it is stated that the accused persons were arrested on 06-09-2020 but were produced on 08-09-2020 and accordingly, 180 days period was due to expire on 03-03-2021. Mr. Mishra further submitted that the petition for extension of time was filed and allowed before expiry of the 180 day period and charge sheet was also submitted before expiry of the extended period and therefore, no indefeasible right whatsoever accrued in favour of the petitioners for being released on default bail. But by completely misrepresenting such facts they have obtained the order, which is nothing but a fraud played on the Court and therefore, the order should be recalled.

“362. Court not to alter judgement. Save as otherwise provided by this Code or by any other law for the time being in force, no Court, when it has signed its judgment or final order disposing of a case, shall alter or review the same except to correct a clerical or arithmetical error.”

The Court relied on judgment R. Rajeshwari v. H.N. Jagdish, (2008) 4 SCC 82 wherein it was held that although a specific bar has been created in regard to exercise of the jurisdiction of the High Court to review its own order and ordinarily, exercise of jurisdiction under Section 482 of the Code of Criminal Procedure would be unwarranted but in some rare cases, the High Court may do so where a judgment has been obtained from it by practicing fraud on it.

The Court observed that even otherwise Section 362 of the Code places a bar on the Court to ‘alter’ or ‘review’ its order or judgment. Once the judgment is pronounced and signed the Court becomes functus officio and therefore, no further alteration or review of the same is permissible save and except to correct clerical or arithmetical errors.

The Court stated that the bar under Section 362 of Cr.P.C. is not absolute and in any case, does not apply in case of recall of the order. There is no dispute that the inherent power of the High Court under Section 482 to give effect to any order under the Code, to prevent abuse of the process of Court or to secure the ends of justice. In case any of the three conditions exist, the High Court would be justified in exercising its jurisdiction.

The Court further observed that the impugned order was passed on erroneous premises as charge sheet was submitted two days after expiry of the extended period and since, the accused persons had not been produced nor their right to be released on default bail informed to them, the CRLMC was allowed by holding that they were entitled to be released on bail.

The court after perusing facts, calculating dates, analysing case laws observed that Court is unable to persuade itself to believe that it was a bonafide error on the part of the accused persons to miscalculate the date, rather, having regard to all the facts and circumstances noted hereinabove, it becomes more than evident that they had done so deliberately in order to obtain a favourable order. This is nothing but playing fraud on the Court. It goes without saying that but for such deliberate mis-presentation this Court would not have passed the order in question.

The Court made it amply clear that in the instant case, the order in question was passed exercising power under Section 482 of the Code which is indisputably, a plenary power. Therefore, once it comes to light that the party concerned was not entitled to the order passed in its favor, which is nothing but an abuse of the process of Court, it would be perfectly legal as also justified in invoking the very same power under Section 482 of the Code so as to prevent such abuse and to secure the ends of justice. True, such power has to be exercised sparingly but if the circumstances so warrant, the Court is expected to rise to the occasion to set right the wrong.

The Court thus held “it becomes evident that the accused petitioners were not entitled to default bail but had obtained such order by deliberately misrepresenting facts before this Court. As such, the order in question cannot be allowed to subsist and deserves to be set aside.”

IO being a responsible police officer in charge of investigating an offence as heinous as one under the NDPS Act carrying stringent punishment, is not expected to show such irresponsible conduct in calculating the time-period for completion of investigation while making prayer for extension of such time. There is no gainsaying about the ill-effect of such callousness and irresponsible conduct. The case at hand is a case in point. This Court therefore hopes and trusts that the higher police authorities shall take note of this lapse and issue necessary instructions to be followed by the IOs, particularly in NDPS cases [Saba Bisoi v. State of Odisha, 2022 SCC OnLine Ori 948, decided on 15-03-2022]