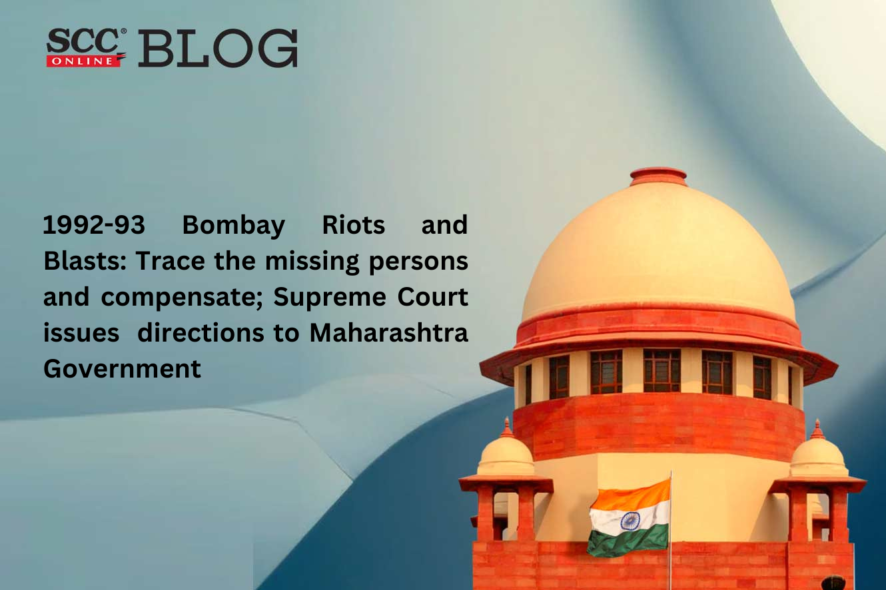 Supreme Court: In a writ petition relating to the issue of implementation of the recommendations of the Justice B.N. Srikrishna commission constituted after the 1992 and 1993 Mumbai riots and bomb blasts, the three-judge bench of Sanjay Kishan Kaul, Abhay S. Oka* and Vikram Nath, JJ. ordered the State Government to constitute a committee and to place material regarding efforts made to trace the family members of the missing persons who have been deprived of compensation and directed that the entire exercise of payment of compensation and interest shall be completed within a period of nine months from the date of this judgment. Further, it directed the State to provide details of 97 cases on dormant files to the Registrar General of the Bombay High Court within one month from the date of this judgment and to immediately   constitute   a   special   cell   to   trace   the absconding   /missing   accused   in   these   cases.

The present petition was filed for declaring that an enquiry conducted under the Commission  of Enquiry Act,1952 (‘the Act’), would tantamount to an inquiry within the meaning of Article 311 (2) of the Constitution of India; and that   the   public   servant   found guilty under the   Act, 1952 be liable to be summarily dismissed; and to direct the State to   accept   and   act   on   the finding   of   the    Justice B.N. Krishna   commission   and to pay compensation to the persons identified as missing.

The Court made the following observations:

In terms of the recommendations of the commission, first information report (‘FIR’) were registered against   nine   police   officials, and two   of   them   were discharged and seven were acquitted. The Court said that the State Government should have been vigilant and proactive in these cases, as they have not stated the reasons for not questioning the orders of acquittal, and now it is too late to direct the State to examine whether the orders of acquittal deserve to be challenged.

Further, one official was made to compulsorily retire by way of punishment and nine other police officials were impose with minor penalties and out of them eight officials have already retired from service.  Further, inquiry against one police official was dropped as he died during the pendency of the inquiry. Thus, in view of long passage of time, the Court said that as far as the disciplinary action is concerned, now in the year 2022, it will be inappropriate to go into the question of the validity of the orders passed by the disciplinary   authorities   and   the   adequacy   of   the   penalties imposed; as a Writ Court should not normally interfere with disciplinary proceedings.

The Court directed the Sessions Court to dispose of the pending case dealing with criminal cases relating to the violencein 1992 and 1993 at the earliest and observed that 97 cases are on dormant files and the reason must be that either the accused therein are not traceable or are absconding. Further, it said that the   High   Court must   issue appropriate directions to the Courts in which these cases   are   pending and must   ensure   that   these Courts take appropriate steps for tracing the accused and directed the State Government to set up a special cell for tracing the accused.

Failure to provide legal aid to the victims

The Court referred to Section 12(e) of the Legal Services Authorities Act, 1987(‘LSA Act’) and observed that a person who is subjected to ethnic violence, is entitled to legal services under   the 1987   Act and interpreted the word ‘ethnic’ to include religion, tribe and caste in it, by giving it a broad meaning for   the   purposes   of   considering   the entitlement to grant of legal aid, and  observed  the incidents of 1992 and 1993  as incidents of ethnic violence, within the meaning of the said Section. Thus, it was observed that on an application being made by the victims of the offence or their legal heirs, legal services could have been provided to them by appointing advocates, during trials and legal services could have been provided to the victims to challenge the orders of acquittal, but as those were the early days of the legal services authorities and now, they have expanded their activities for effectively rendering legal services, it was held that,  now, it   is   too   late     to   direct   the   authorities to render legal aid to the victims of the 1992 and 1993 riots for challenging the orders of acquittal.

One of the grievances of the petitioner was that in large number of riots related offences, a proper investigation was not carried   out   and   therefore, about   1371   cases   were   closed   by classifying as ‘A’ Summary (true but undetected). However, the Court noted that the   State   Government   had appointed a committee under the chairmanship of the Director General of Police to scrutinize all cases which were classified as ‘A’   Summary and observed that out of the 112 cases, 104 were again classified as ‘A’ Summary, and in the remaining eight cases, charge sheets were filed, wherein, seven cases resulted in acquittal, and in  one case, where the offence was compoundable, the case was compounded.

The Court referred to Article 21 of the Constitution of India and said that it confers a right on every citizen to live with human dignity, and if   the   citizens   are   forced   to   live   in   an   atmosphere   of communal tension, it affects their right to life guaranteed by Article 21. Further, there was a failure on the part of the State Government to maintain law and order and to protect the rights of the people guaranteed under the said Article. Thus, the affected persons had a right to seek compensation from the State Government.

Thus, the Court proposed to   constitute   a   committee headed   by   the   member Secretary of the Maharashtra State Legal Services Authority to monitor the efforts made by the State   Government   to   trace   the   family   members   of   missing persons, whose addresses are not available and to ensure that   those   eligible   persons   who   have   not   made   procedural compliances are   assisted   to   make   necessary   compliance and to investigate the records relating to the remaining 108 missing persons, and further directed the State Government to nominate a revenue officer and a police officer as   the   other   two   members   of   the committee. 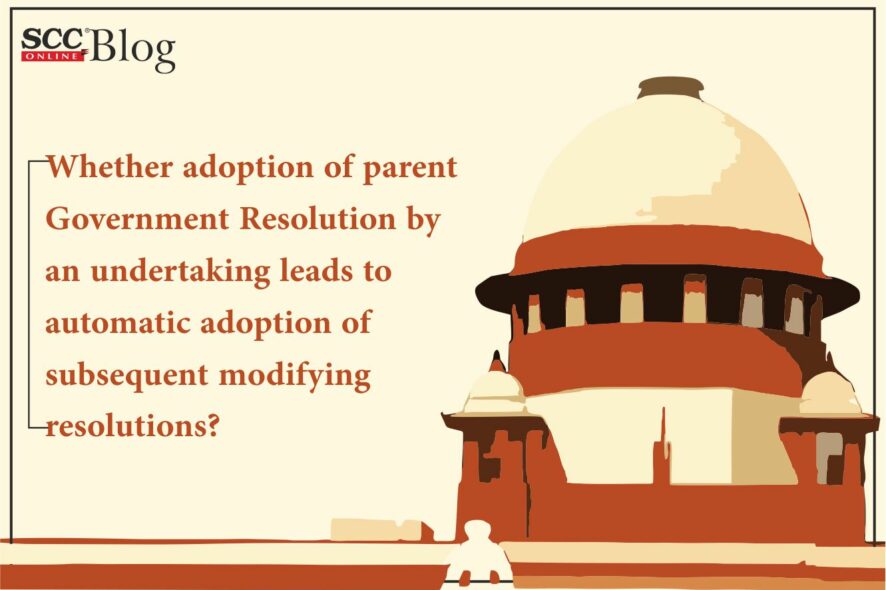 Supreme Court: The Division Bench of Dr Dhananjaya Y Chandrachud and M. R. Shah*, JJ., held that equation of posts and salary is a complex matter which should be left to the expert body and undertakings. Opining that granting of pay parity by the Court may result in a cascading effect having adverse consequences on employer, the Bench reminded,

“There are limitations or qualifications to the applicability of the doctrine of ‘equal pay for equal work’.”

The instant appeal was filed against the order of Gujarat High Court in Letters Patent Appeal by which the High Court had quashed and set aside the judgment and order passed by the Single Judge whereby the Single Judge had held that the appellants were entitled to the pay scale of Rs.950-1500 with all consequential benefits upon completion of 10 years of service and revised pay scale as per 5th, 6th and 7th Pay Commission scales.

With a view to resolve the issue relating to service condition of daily wagers engaged in maintenance and repairing work a committee called ‘Shri Daulatbhai Parmar Committee’ was constituted under the Chairmanship of the then Minister of Roads and Building Department–Shri Daulatbhai Parmar. On the recommendation of Parmar Committee, the Government of Gujarat passed a Resolution dated 17-10-1988 to give certain benefits to the skilled daily wager workmen depending upon the period of services undergone, i.e. less than 5, 5 or more or 10 years.

That the Respondent–Gujarat Water Supply and Sewerage Board adopted the said Government Resolution by way of communication dated 08-06-1989 and accordingly, all the daily rated employees working with the Board including the original petitioners were granted the benefit of the pay scales of Rs.750 and other benefits upon their completion of 5 years services.

The Bone of Contention

Noticeably, the Government issued subsequent Resolutions dated 01-05-1991 and 15-02-1992 by which certain modifications were carried out in the parent Resolution dated 17-10-1988 and it was provided that such daily wagers who were SSC passed and had completed 7 years, the Department would assign administrative work of clerical cadre Class III and they should be paid pay scale of Rs.950-1500 from the date of assignment of duty.

Therefore, the Bench was of the view that as such the Board which is an autonomous and statutory body created under the Gujarat Water Supply and Sewerage Board Act, 1978 never adopted the subsequent Government Resolutions and unless the said Resolutions were adopted by the Board, the daily rated employees working with the Board shall not be entitled to the benefits flowing from the subsequent resolutions.

Upholding the decision of the Division Bench, the Court held that daily rated employees of the Board cannot claim the benefits from the Resolutions of 1991 and 1992 as a matter of right as they do have any right to get the benefits flowing from the aforesaid Resolutions till specifically adopted by the Board like adoption of the parent Resolution dated. The Bench stated,

“There shall not be automatic adoption and/or applicability of the subsequent resolutions.”

The Bench added, the Board is an independent entity and it might have its own financial capacity and therefore its employees cannot claim parity with the employees of the State Government. The State Government and the autonomous Board/bodies cannot be put at par as the Board has to depend upon their own financial resources and it is ultimately for the Board to take a conscious decision which can be termed as a policy decision on the pay scales to be adopted and/or certain benefits which would have financial implications. Everything depends upon its economic viability or the financial capacity, otherwise the unit itself may not be able to function and may have to close down inevitably and have disastrous consequences for the employers themselves.

In the above backdrop, the Bench opined that the daily rated employees of the Board cannot invoke Article 14 of the Constitution to claim benefit on the ground of parity if they otherwise are not entitled to such benefit as Article 14 cannot be invoked to perpetuate illegality and irregularity. Accordingly, it was held that the Single Judge erred in directing the Board to grant the benefits flowing from the subsequent Government Resolutions which was rightly set aside by the Division Bench of the High Court.

Kamini Sharma, Editorial Assistant has pit this report together

For the Board: Aastha Mehta, Advocate