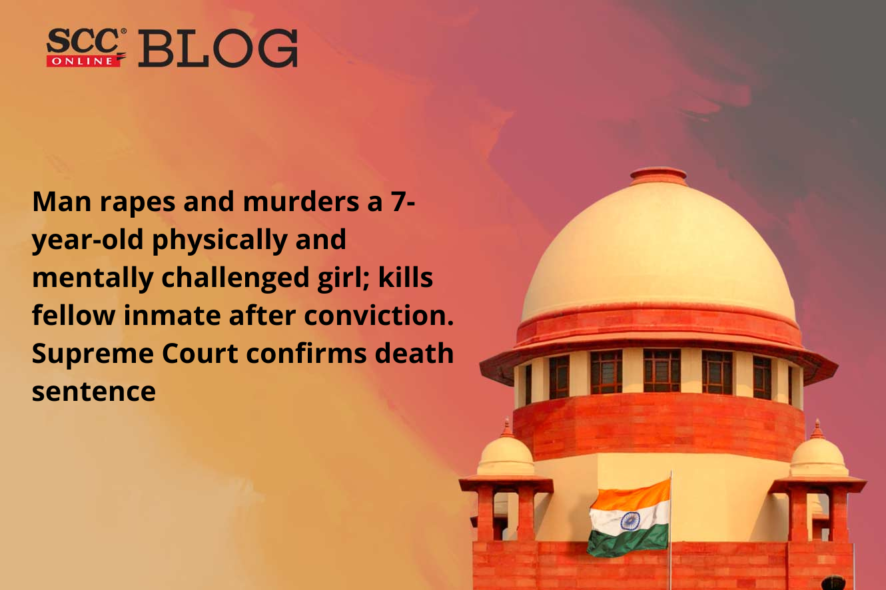 Supreme Court: The 3-judge bench of AM Khanwilkar, Dinesh Maheshwari* and CT Ravikumar, JJ has refused to commute the death sentence to life imprisonment of a man convicted for brutal rape and murder of a 7-year-old physically and mentally challenged girl. The Court noticed that it is unlikely that the appellant, if given an absolution, would not be capable of and would not be inclined to commit such a crime again.

The facts of the case are such that the Supreme Court was left with no choice but to confirm his death sentence, even though in several cases, the Courts have refrained from awarding or approving death sentence even in the cases of gruesome killings, essentially on the premise that even a semblance of probability of reformation of the convict ought to be given a chance, rather than awarding capital punishment, which is of irretrievable nature.

The appellant kidnapped the victim girl, who was only 7½ years of age, who was even otherwise a mentally and physically challenged child, with betrayal of trust when the victim girl got lured with confectionary items given by him. He then brutally raped the victim girl and eventually mercilessly killed the girl by causing horrid injuries on her head. All these crimes were committed by using a stolen motorcycle.

The appellant, who was about 28 years of age and was having the family of wife, a daughter who was also about 8 years of age and aged parents, was continuously involved in criminal activities even prior to this crime ranging from Section 3 of Prevention of Damage to Public Property Act, 1984, Section 379 IPC and even 307 IPC.

It is important to note that the appellant’s criminal acts did not stop even after his conviction for this beastly crime. Even while in jail, the appellant’s conduct has not been free from blemish where, apart from quarrelling with other inmate and earning 7 days’ punishment, the appellant had been accused and convicted of the offence of yet another murder, this time of a co-inmate, a Pakistani National, while joining hands with three other inmates.

The appellant has a family with wife and minor daughter and aged father and the crime was committed when he was only 28 years of age. However, these mitigating factors are pitted against following factors pertaining to the appellant himself.

When an attempt was made before the Court to suggest on behalf of the appellant that his overall conduct in prison is without any blemish except the allegation of his involvement in a case of murder, it observed,

“We could only wonder what more of criminal activity would qualify as blemish, if not the involvement and conviction in a case of murder of a fellow jail inmate! This is apart from the other 7 days’ punishment earned by the appellant for quarrelling with another jail inmate.”

Hence, the Court observed that read as a whole, the fact-sheet concerning the appellant leads only the logical deduction that there is no possibility that he would not relapse again in this crime if given any indulgence.

For appellant: Senior Advocate A. Sirajudeen