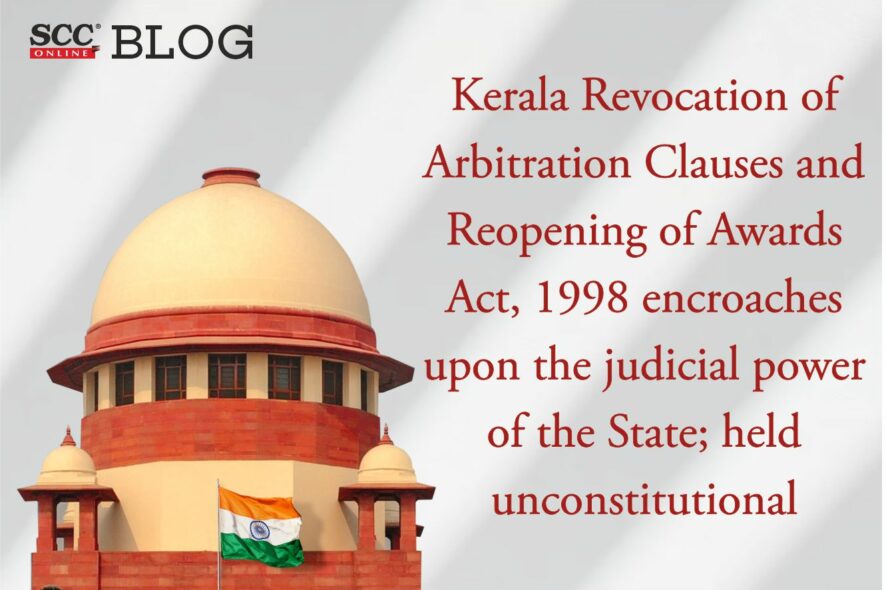 Supreme Court: The bench of L. Nageswara Rao* and BR Gavai, JJ has held that the Kerala Revocation of Arbitration Clauses and Reopening of Awards Act, 1998 encroaches upon the judicial power of the State and hence, is liable to be declared unconstitutional.

Section 3 of the State Act provides for “Cancellation of arbitration clauses and revocation of authority   of arbitrator”. Sub-section (1) provides that notwithstanding anything contained in the Contract Act, 1872 or in the Arbitration Act, 1940 or in the Arbitration and Conciliation Act, 1996 or in any other law for the time being in force or in any judgment, decree or order of any court or other authority or in any   agreement or other instrument, the arbitration clauses in every agreement shall stand cancelled; the authority of an arbitrator appointed under an agreement referred to in clause (i) shall stand revoked;   and any agreement referred to in clause (i) shall cease to have effect insofar as it relates to the matters in dispute or difference referred. The same shall be with effect on and from the date of commencement of the State Act. Sub-section (2) provides that nothing provided in subsection (1) of Section 3 of the State Act shall be a bar for any party to an agreement to file a suit in the court having jurisdiction in the matter to which the agreement relates and all questions regarding the validity or effect of the agreement between the parties to the agreement or persons claiming under them and all matters in dispute or difference between the parties to the agreement shall be decided by the court, as if the arbitration clauses had never been included in the agreement.

It is important to note that the list containing details of the Kerala arbitration cases involved in the present matters revealed that in most of the cases, the awards were passed prior to the year 1992 and the awards were made rule of the court prior to the year 1993. In some of the matters, on the date of the enactment of the State Act, the appeals preferred by the State under Section 39 of the 1940 Act were pending before the competent courts.

The Supreme Court, in a 125-pages-long verdict, elaborately considered the scheme under Sections 15, 16 and 17 of the Arbitration Act, 1940 and observed that before making an award “Rule of Court” by passing a judgment and decree, the court is required to take into consideration various factors, apply its mind and also exercise its discretion judicially. The power exercised by the court under Section 17 of the 1940 Act is a judicial power.

Further, the perusal of the various judgments of the Supreme Court also fortified the position that the   powers exercised by the court under the provisions of the 1940 Act are judicial powers and that the power to make an award “Rule of Court” is not a mechanical power.

“… the powers exercised by the Chief Justice of the High Court or Chief Justice of India under Section 11(6) of the 1996 Act are not administrative but are judicial powers. It would thus not sound to reason, that when a power under Section 11(6) of the 1996 Act for appointment of an arbitrator has been held to be a judicial power, the power to make an award a “Rule of Court”, which can be made only upon the satisfaction of the court on the existence of the 114 eventualities set out in Section 17 of the 1940 Act, is not an exercise of judicial power.”

In the present case, it was noticed that what has been done by the State Act, is annulling the awards and the judgments and decrees passed by the court vide which the awards were made “Rule of Court”. As such, the rights which accrued to the parties much prior to the enactment of the State Act have been sought to be taken away by it. Hence,

“… the State Act, which has the effect of annulling the awards which have become “Rules of Court”, is a transgression on the judicial functions of the State and therefore, violative of doctrine of “separation of powers”. As such, the State Act is liable to be declared unconstitutional on this count.”