Civil Procedure Code, 1908 — S. 11 and Or. 14 Rr. 1 & 2 — Res judicata: Law clarified regarding plea of res judicata, when may be decided as preliminary issue. Plea of res judicata, held, may in an appropriate case be determined as a preliminary issue when: (a) neither a disputed question of fact, nor, (b) a mixed question of fact and law, has to be adjudicated for resolving it, nor, (c) has there been any material alteration in the fact(s) since the decision in the earlier proceedings was rendered, which would require proof of any such new fact(s). [Jamia Masjid v. K.V. Rudrappa, (2022) 9 SCC 225]

Constitution of India — Arts. 30 and 29 — Religious, linguistic or cultural minorities — Religious, linguistic or cultural group that is majority in one State, which may be in minority in another State: Issues raised such as whether Parliament and State Legislatures have concurrent powers to legislate on matters pertaining to minority communities and to protect their interest in accordance with constitutional guarantees, or, whether Parliament has exclusive power in this regard, held, will be finalised after Central Government has a wide consultation with State Governments and other Stakeholders. [Ashwini Kumar Upadhyay v. Union of India, (2022) 9 SCC 261]

Criminal Procedure Code, 1973 — S. 439 — Bail: Grant of bail without considering gravity of offence and nature of allegations against the respondent-accused, particularly as to the role played by him in the commission of the alleged murder is not justified. Hence, bail quashed. [Nitu Kumar v. Gulveer, (2022) 9 SCC 222]

Penal Code, 1860 — S. 302 or S. 304 and S. 34 [S. 300 Exception 4] — Murder or culpable homicide: Applicability of S. 300 Exception 4, held, directly ruled out in view of the nature of incident as stated by the witnesses and with reference to the nature of injuries sustained by the deceased, like multiple incise wounds including that on the left frontal region of the skull as also stab wounds on the left side of the chest. Resultantly, conviction recorded under Ss. 302/34, held, justified. [Pillu v. State of M.P., (2022) 9 SCC 283]

Practice and Procedure — Delay/Laches/Limitation — Unexplained delay by Government Department: No sufficient cause of delay, only lethargy on part of Revenue Department is no more acceptable for condoning delay in such an age of computerisation. Such kind of cases have already been categorised by Supreme Court as “certificate cases” filed with only object to obtain a quietus from Supreme Court on ground that nothing could be done because highest Court has dismissed appeal. Such practice and process has already been deprecated by Supreme Court and it was deprecated again. If Government/public authorities suffer losses, it is time when officers concerned responsible for same, bear consequences. Special leave petition dismissed as time-barred with costs to be recovered from officers responsible for delay in filing special leave petition. [Union of India v. Vishnu Aroma Pouching (P) Ltd., (2022) 9 SCC 263]

Practice and Procedure — Delay/Laches/Limitation — Unexplained delay of 502 days by Government Department — “Certificate cases” — No sufficient cause shown: Dismissal of such proceedings as time-barred with direction for recovery of costs/losses suffered by Government from the officials concerned. [State of U.P. v. Sabha Narain, (2022) 9 SCC 266]

Punjab Passengers and Goods Taxation Act, 1952 (16 of 1952) — S. 10 — Exemption from payment of passengers tax in terms of Memo dt. 22-9-1970 issued under — Scope of — Purposive interpretation of “school children”: Exemption granted thereunder to educational institutions carrying “school children” from levy of passengers tax cannot be denied in respect of vehicles used for transportation of students going to educational institutions like colleges and universities. Broad expression “children”, held, obviously, refers to students taking instructions in educational institutions, irrespective of their class or standard or level. [State of Haryana v. Daronacharya College of Engg., (2022) 9 SCC 301]

Wildlife (Protection) Act, 1972 — Ss. 18-A, 29 and 38-O(1)(g) r/w S. 3 of the Environment (Protection) Act, 1986 — Protection to sanctuaries — Wildlife clearance — Doubling of railway line: In this case, Ministry of Railways failed to provide any substantial basis for requirement of doubling railway line by addressing its impact on habitat and damage that it would cause to environment. Therefore, conclusion of CEC upheld, and approval granted by Standing Committee of NBWL for doubling railway line between Castlerock to Kulem, revoked. [T.N. Godavarman Thirumulpad v. Union of India, (2022) 9 SCC 306] 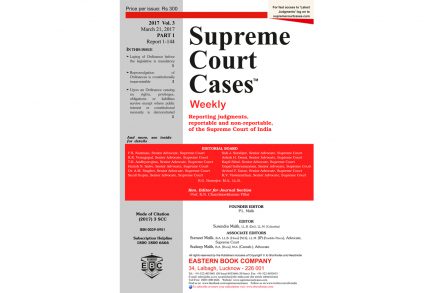