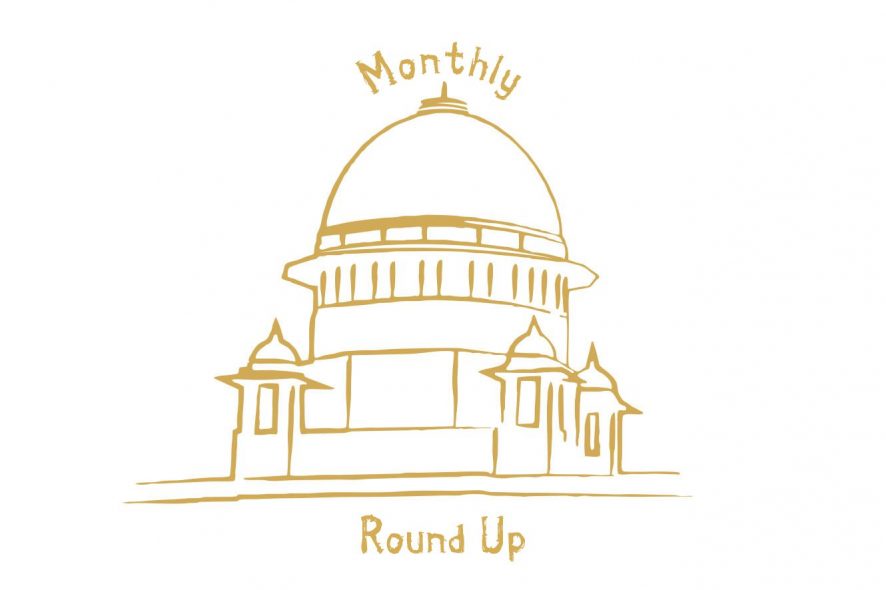 If the High Court were to carry out a prima facie evaluation, it would have been impossible for it not to notice the disconnect between the FIR and the provisions of Section 306 of the IPC.

Dispensation of justice by the Tribunals can be effective only when they function independent of any executive control: this renders them credible and generates public confidence.

COVID-19| Seeking waiver of interest for loan during the moratorium period? SC asks Govt to implement decision to forego interest on 8 categories

All steps to implement the decision dated 23.10.2020 of the Government of India, Ministry of Finance be taken so that benefit to the eight categories contemplated in the affidavit can be extended.

COVID-19| ‘You can’t stop at issuing advisory’; SC directs Centre to ban the use of disinfection tunnels

In event, use of disinfectant on human body is to cause adverse effect on the health of the people, there has to be immediate remedial action.

Govt sits over land for 33 years without authority. SC directs handing over of land to owners within 3 months; says such lawlessness cannot be condoned

The courts’ role is to act as the guarantor and jealous protector of the people’s liberties: be they assured through the freedoms, and the right to equality and religion or cultural rights under Part III, or the right against deprivation, in any form, through any process other than law.

SC has asked TRAI to ensure that such information is kept confidential and is not made available to the competitors or to any other person.

Are you a homebuyer planning to take builder to Court? SC says you can choose between seeking remedy under the RERA Act or the Consumer Protection Act

The RERA Act does not bar the initiation of proceedings by allottees against the builders under the Consumer Protection Act, 1986.

‘Law should not become a ruse for targeted harassment’; SC reminds Courts of their duty to ensure human liberty

Liberty survives by the vigilance of her citizens, on the cacophony of the media and in the dusty corridors of courts alive to the rule of (and not by) law. Yet, much too often, liberty is a casualty when one of these components is found wanting.

“We propose to pass an order to satisfy our judicial conscious in the given scenario where only 28 people have been recruited in pursuance to an examination process where 75 vacancies existed.”

Thinking of seeking transfer of petition for restitution of conjugal rights under Section 21-A(2)(b) of the Hindu Marriage Act, 1955? SC says you can’t

Signature obtained by fraud? Burden of proof is on the party alleging such forgery; says SC

For invoking Section 17 of the Limitation Act, 1963, two ingredients i.e. existence of a fraud and discovery of such fraud, have to be pleaded and duly proved.

Blacklisting can effectively lead to the civil death of a person.

Mere lack of State Government’s prior consent does not vitiate CBI investigation in absence of prejudice caused to accused; says SC

State of Uttar Pradesh has accorded a general consent for investigation of cases by CBI in the whole of UP.

The finding of guilt cannot be based purely on the refusal of the accused to undergo an identification parade.

Despite many witnesses turning hostile, SC finds man guilty of killing his wife in 1999; Says it’s not an unusual event in long drawn out trials in India

A large number of witnesses turning hostile is not an unusual event in the long drawn out trials in our country and in the absence of any witness protection regime of substance, one has to examine whatever is the evidence which is capable of being considered, and then come to a finding whether it would suffice to convict the accused.

Nominated person faces trial for 30 years in Dalda Ghee adulteration case while HUL never gets convicted. SC says either both get convicted or none

In the absence of the Company, the Nominated Person cannot be convicted or vice versa.

Timing of crime saves man from facing gallows or prison for the rest of his life for raping and killing 2.5 year old niece. SC commutes sentence under Section 376A IPC

In a chilling crime, a 21-year-old man was had raped and killed his 2.5 years-old niece just a week after the amended Section 376A was brought into force in the year 2013.

Not just the petitioning creditor but ‘any’ creditor can initiate transfer of winding up proceedings from a Company Court to NCLT; holds SC

Proceedings for winding up of a company are proceedings in rem to which the entire body of creditors is a party, hence, by a deeming fiction the petition by even a single creditor is treated as a joint petition.

High Court not obliged to frame substantial question of law if no error is found in First Appellate Court’s findings; says SC

Can NSE realise withheld securities prior to expulsion or declaration of defaulter? SC discusses in detail

Vesting does not take place in favour of the Exchange unless a formal expulsion order is passed. The relevant point of time, therefore, is the date of expulsion. Without such legal vesting, the Exchange only sits upon the withheld assets as a custodian.

Is obstruction & abuse by upper caste person due to property dispute an offence under SC/ST Act? Not in all cases, says SC

The property disputes between a vulnerable section of the society and a person of upper caste will not disclose any offence under the Act unless, the allegations are on account of the victim being a Scheduled Caste.

Ex-BSF Jawan Tej Bahadur’s nominations were rejected by the returning officer for want of a certificate to the effect that he has not been dismissed for corruption or disloyalty to the State.

2015 Guru Granth Sahib sacrilege| ‘No threat to the lives of accused or to fair trial’; SC refuses to transfer the trial outside Punjab

The transfer of trial from one state to another would inevitably reflect on the credibility of the State’s judiciary. Except for compelling factors and clear situation of deprivation of fair justice, the transfer power should not be invoked.

The law is well settled that Courts would not thwart any investigation.

Vires of a relevant provision goes to the root of the matter.

Railway Protection Force officer fails to detect & prevent thefts. SC answers if his compulsory retirement is justified or not

A police officer in the Railway Protection Force is required to maintain a high standard of integrity in the discharge of his official functions.

No reservation for in-service doctors in Super Specialty Medical Courses for the academic year 2020-2021; holds SC

Keeping in mind that the advertisements for filling the entire cadre, in both the quotas or streams of recruitment were issued one after the other, and more importantly, that this was the first selection and recruitment to a newly created cadre, the delay which occurred on account of administrative exigencies and also the completion of procedure, such as verification of antecedents, the seniority of the promotees given on the basis of their dates of appointment was justified.

Connection with agricultural land a must for homestead land & waterbodies to come within the purview of the WB Restoration of Alienated Land Act, 1973

Homestead land when included within the meaning of the term “land” in 1973 Act means homestead of an agriculturist and not any and every structure on non-agricultural land.

“One of the basic tenets to be followed by every Hindu is tolerance. Tolerance must be his own community or religion and in particular, to also to every other religious practice”: Madras HC