Supreme Court: The bench of AM Khanwilkar and BR Gavai, JJ has held that not obtaining prior consent of the State Government under Section 6 of the the Delhi Special Police Establishment Act, 1946 (DPSE Act) would not vitiate the investigation unless the illegality in the investigation can be shown to have brought about miscarriage of justice or caused prejudice to the accused.

In the present case, a joint surprise raid was conducted by the CBI in factory premises of Fertico Marketing and Investment Private Limited and it was found that the coal purchased under the FSA was sold in the black market. It was further found by CBI that this was done in connivance with the unknown government officials which led to loss of Rs.36.28 crore to the Central Government. Hence, an FIR was registered by CBI for the offences punishable under Sections 120B and 420 of the IPC and Section 13 (2) read with Section 13(1)(d) of the Prevention of Corruption Act, 1988 (hereinafter referred to as ‘the PC Act’) against Anil Kumar Agarwal, Director of said company and unknown officials of the District Industries Centre (DIC), Chandauli.

During the course of investigation, it was found that two officers namely Ram Ji Singh, the then General Manager, DIC, Chandauli and Yogendra Nath Pandey, Assistant Manager, DIC, Chandauli were also part of the conspiracy. Investigation revealed that these two officials had abused their official positions and fraudulently and dishonestly sent false status reports regarding working conditions of the accused companies and thereby, dishonestly induced the Northern Coalfields Limited to supply coal on subsidized rates, for obtaining pecuniary advantage. Hence, a Post-Facto sanction was granted on 7th September 2018.

The appellants submitted that in the absence of the consent of the State Government under Section 6 of the DSPE Act, the DSPE (CBI) had no powers to conduct investigation in view of the provisions contained in Section 6 of the DSPE Act and that failure in obtaining the consent prior to registration of the FIR would go to the root of the matter and vitiate the entire investigation. It was submitted that an offence under Section 120B of the IPC read with Section 13(1)(d) of the Prevention of Corruption Act cannot stand unless there is a meeting of minds between public servant and the private individuals and as such, an FIR could not be registered. Hence, that investigation in a matter which concerns the conspiracy between the private individual and the public servant, the same would not be permitted unless there is a valid consent under Section 6 of the DSPE Act. Further, the Post-Facto sanction granted on 7th September 2018, would not cure the defect of obtaining the prior consent.

The State of Uttar Pradesh has accorded a general consent for extension of powers and jurisdiction of the Members of DSPE, in whole of the State of Uttar Pradesh for investigation of offences under the Prevention of Corruption Act, with the rider that no such investigation shall be taken up in cases relating to the public servants, under the control of the State Government except with the prior permission of the State Government. As such, insofar as the private individuals are concerned, there is no embargo with regard to registration of FIR against them inasmuch as, no specific consent would be required under Section 6 of the DSPE Act.

The Court noticed that though Section 5 of DPSE Act enables the Central Government to extend the powers and jurisdiction of Members of the DSPE beyond the Union Territories to a State, the same is not permissible unless, a State grants its consent for such an extension within the area of State concerned under Section 6 of the DSPE Act.

Vide notification dated 15th June 1989, the State of Uttar Pradesh accorded a general consent thereby, enabling the Members of DSPE to exercise powers and jurisdiction in the entire State of Uttar Pradesh with regard to investigation of offences under the Prevention of Corruption Act, 1988 and also to all or any of the offence or offences committed in the course of the same transaction or arising out of the same facts.

On appeal filed by the private individuals

“As such, for registration of FIR against the private individuals for the offences punishable under the Prevention of Corruption Act and other offences under the IPC, committed in the course of the same transaction or arising out of the same facts, the Members of DSPE have all the powers and jurisdiction. As such, we find absolutely no merits in the appeals filed by the private individuals.”

On appeal filed by the public officers

“… there are no pleadings by the public servants with regard to the prejudice caused to them on account of non-obtaining of prior consent under Section 6 of the DSPE Act qua them specifically in addition to the general consent in force, nor with regard to miscarriage of justice.”

The Court, hence, found no reason to interfere with the finding of the High Court with regard to not obtaining prior consent of the State Government under Section 6 of the DSPE Act. 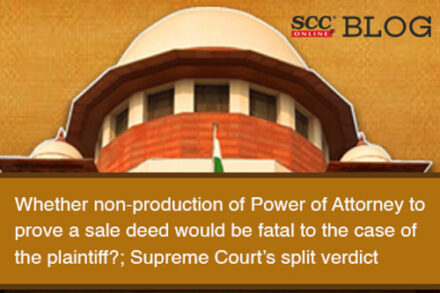 Whether non-production of Power of Attorney to prove a sale deed would be fatal to the case of the plaintiff?; Supreme Court’s split verdict