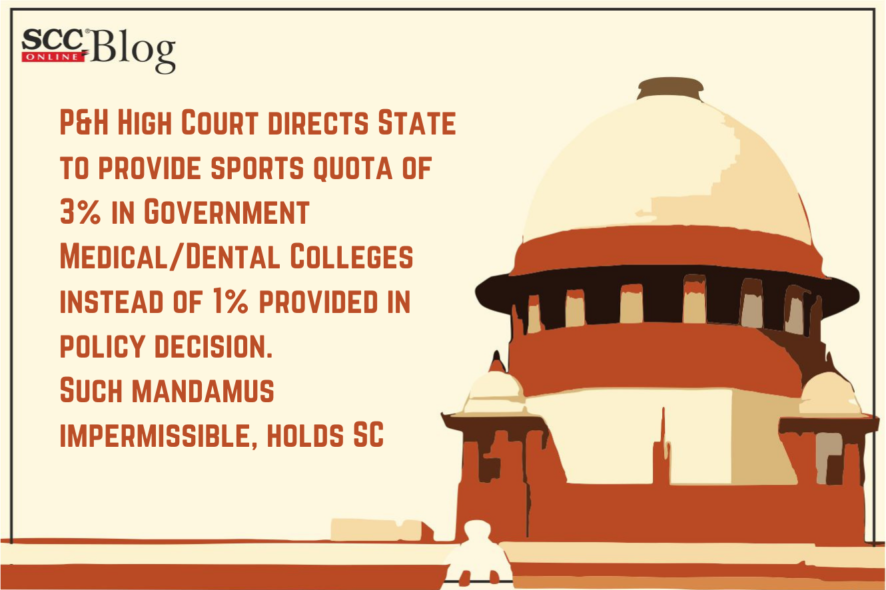 The Court was deciding the appeal against the Punjab and Haryana High Court verdict where the High Court had directed the State to issue a fresh notification providing for 1% reservation/quota for children/grand children of terrorist affected persons/Sikh riots affected persons in all private unaided nonminority Medical/Dental institutions in the State of Punjab and had further directed that the said reservation/quota shall apply to management quota seats as well and further directed that the fresh notification shall also provide for a sports quota of 3% in Government Medical/Dental Colleges.

The State of Punjab framed its Sports Policy in the year 2018 which provided that 3% reservation in admissions will be provided for graded sports persons. However, by order dated 25.07.2019, a conscious decision was taken by the Government of Punjab to provide 1% reservation for sports persons. The said order was passed taking into consideration Clause 10 of the Sporty Policy, 2018.

“The High Court has exceeded its jurisdiction while issuing a writ of mandamus directing the State to provide a particular percentage of reservation for sports persons, namely, in the present case, 3% reservation instead of 1% provided by the State Government, while exercising powers under Article 226 of the Constitution of India.”

Therefore, the impugned common judgment and order passed by the High Court insofar as directing the State to provide for 3% reservation for sports persons and/or provide for a sports quota of 3% in the Government Medical/Dental Colleges was found to be unsustainable and was hence, set aside.

Uttaranchal High Court: A Full Bench of Ramesh Ranganathan CJ and Sudhanshu Dhulia and Alok Singh, JJ. entertained a writ petition calling into question the exhaustiveness of Article 16(4) of the Constitution of India.

The petitioners in the aforementioned writ questioned the Court, that whether reservation for the ‘sports’ category can be provided under Article 16(1) of the Constitution or whether Article 16(4) was exhaustive in all forms?

The contentions were based on the Order issued by Chief Secretary, Government of Uttarakhand in 2006, which informed that the Governor was pleased to sanction 4% horizontal reservations, for players who were successful at the international/national level, for employment in the services of the State and other organizations. By a subsequent Order of 2009, it was informed that such reservations were only available to domiciled persons.

A learned Single Judge earlier contemplated a petition filed by three sportsperson from different State who sought mandamus against State as they claimed appointment under the sports category. Court took note of the stand of the Government of Uttarakhand, they contended that horizontal reservation was not available to sports personalities, who did not have a permanent domicile in the State of Uttarakhand, and they could not be appointed. The learned Single Judge, thereafter, observed that refusal to appoint the petitioners in the quota, reserved for sportsmen, was illegal as their candidature was entertained, and they were declared successful. Hence, the State was directed to appoint the petitioners on the basis of the 2006 Order. The case went into Appeal and the Division Bench opined that an important aspect had been overlooked by the learned Single Judge, that the Government, by an Order or otherwise, could not reserve any Government post for sports personnel and same is stated under Article 16.

The Division Bench in Appeal stated earlier, “Sub-Article (1) of Article 16, were ‘any office under the State’; therefore, in respect of each and every office under the State, there shall be equality of opportunity for all citizens; this suggested that, in the matter of public appointment, everybody had the right of equal opportunity of being considered; but for Sub-Article (4) of Article 16, no reservation could be made for backward class citizens; but for Sub-Article (4A) of Article 16, no reservation could be made for the Scheduled Castes and the Scheduled Tribes; in other words, if a class did not come within the exceptions, as provided under Sub-Articles (4), (4A) and (4B) of Article 16, the State was bereft of any power to provide reservation for any person in any employment available within the State” . Thus, the Court overruled the decision of learned Single Judge.

Subsequently, the present case was brought before a Division Bench, who observed that it was brought to their notice that the Government of Uttarakhand had taken a decision to accept the judgment mentioned above in Appeal. It was declared that no one including the petitioner of the current Writ was considered in the sports quota; the counsel for the petitioner had contended that he was not a party to the said judgment, and the judgment was wrong as there was an authority under Article 16(1) to make a horizontal reservation.

The aggrieved petitioners of both the aforementioned cases filed a writ before a Full Bench. The learned counsel for the petitioner Alok Singh, submitted that earlier Court had erred in holding that Clauses (4), (4A) and (4B) of Article 16 are exhaustive of all forms of reservation and no reservation can be made under Article 16(1).

The counsel for the respondent-State Paresh Tripathi stated that reservations can no doubt be provided for sportsmen under Article 16(1) of the Constitution. He further contended that no obligation was cast either on the Legislature or the Executive to provide such reservation; it was for them to decide whether or not to provide reservation; a Division Bench in Appeal struck down horizontal reservation even based upon Order of 2006. It was argued that said judgment had attained finality since no appeal was preferred against it. If only Legislature or the Executive pass a law or make a rule or frame a policy afresh, providing reservation in favor of sportsmen, can the petitioners then claim the benefit of reservation under the sports category?

The Court has discussed some really important points based on the writ such as, can reservations be provided under Article 16(1)? Would the Order now passed hold the judgment of Appeal, not a good law? Can a mandamus be issued to the Legislature or Executive? Addressing these issues, the Full Bench, referred to the judgment of Indira Sawhney v. Union of India (2000) 1 SCC 168 , and held that, the opinion of the Division Bench, in Special Appeal, that Article 16(4) of the Constitution of India is exhaustive of all forms of reservation, is not good law; and reservation in favor of categories, other than those in whose favor reservation is provided under Articles 16(4), (4A) and (4B), can be extended under Article 16(1), provided such reservation satisfies the test of a valid and reasonable classification. It further stated that, as the Government Order of 2006, has been held to be non-est by the Division Bench in its order in Special Appeal and order has attained finality, the petitioners in both the Writ Petitions were not entitled to the grant of any relief from the Court.[Dhananjay Verma v. State of Uttrakhand, 2019 SCC OnLine Utt 373, decided on 21-05-2019]