Supreme Court: In an interesting case the Vacation Bench comprising Dinesh Maheshwari and Krishna Murari, JJ., disapproved a strange bail condition imposed by the M.P. High Court. The High Court had directed the husband to surrender as a condition for pre-arrest bail of his wife.

The petitioner’s wife (applicant herein after) had approached the M.P. High Court with an application for pre-arrest bail apprehending her arrest in connection with a case registered against her husband’s family for offences punishable under Sections 304-B, 498-A, 34 of the Penal Code, 1860.

Considering that the applicant’s husband is posted at Mohana, District Gwalior which is a distant place from where the deceased resided last and the applicant has to take care of her children (two children aged 6 years and 3 years respectively), the High Court granted her pre-arrest bail with a direction to her husband to immediately surrender.

Aggrieved thereby, the petitioner, elder brother of the husband of the deceased, assailed the impugned order in the instant petition. The petitioner contended that the High Court had—while granting the prayer for pre-arrest bail to his wife— apart from the requirements of furnishing the bail bonds and surety, imposed further several conditions and then, before concluding the matter, observed as under:

“It is expected that husband of the applicant shall immediately surrender to the course of justice.”

Opining that the petitioner’s grievances were justified, the Court stated that it is inexplicable how the High Court can, while granting pre-arrest bail to the petitioner’s wife make such an observation that may operate against the interests of the petitioner; that too without extending him an opportunity to be heard. Considering the facts and circumstances of the case and the nature of accusations, the Court remarked,

“We are unable to find any logic in such a condition.”

Hence, the Court disapproved of the condition imposed on the petitioner by the High Court.

Though the Court refrained to comment on the merits of the petitioner’s case for grant of pre-arrest bail, it held that the observations occurring in the impugned order cannot and shall not operate for being prejudicial to the interests of the petitioner.

Consequently, the Court directed that the petitioner’s bail plea shall be examined by the Court concerned on its own merits. Additionally, the Court added that since the instant order was passed without notice to the other side, the respondent-State will have the liberty to apply for a modification or for any other order, if necessary. 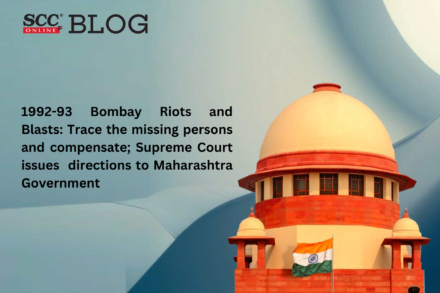 Ker HC | “Area of the building is extraneous for grant permission for residential/commercial use”; HC holds Rule 12(9) of Conservation of Paddy Land and Wetland Rules ultra vires the Act

Del HC | Trial court cannot reconsider issue of maintainability of suit under Or. 37 CPC where once summons have been issued and served on defendant