National Company Law Appellate Tribunal, New Delhi: In an appeal filed by the appellant, an ex-Promoter of the Corporate Debtor challenging the order by the Adjudicating Authority, NCLT, a bench comprising of Ashok Bhushan*, J., and Barun Mitra (Technical Member) held that the Adjudicating Authority has not committed any error in rejecting the appellant's application praying to keep the respondent's application in abeyance.

In the instant matter, the Adjudicating Authority passed an order for initiation of Corporate Insolvency Resolution Process (CIRP) against the respondent, Corporate Debtor — Pawan Doot Estate (P) Ltd. Resolution Professional (RP) presented the one and only Resolution Plan which was received after an advertisement was issued inviting Expression of Interest, in the 10th Meeting of Committee of Creditors (CoC). The Letter of Intent issued by the RP was unconditionally accepted by the Successful Resolution Applicant (SRA) and Performance Bank Guarantee amount was deposited. An application, IA No.1077 of 2020, under S. 30(6) IBC was filed by the RP before the NCLT for approval of the Resolution Plan, meanwhile the appellant filed an application praying for hearing in IA No.1077 of 2020 be kept in abeyance. Vide order dated 23.11.2022, the NCLT rejected the application filed by the appellant and vide order dated 02.12.2022, the NCLT heard IA No.1077 of 2020 and reserved the order. Aggrieved by the impugned order dated 23.11.2022 by the NCLT rejecting the application filed by the appellant, the appellant filed the present appeal before this Tribunal.

The Tribunal observed that the Regulation making authority was aware of the entire process under IBC, including approval of the Plan by the CoC and filing of the application before the Adjudication Authority for approval of the Resolution Plan.

The Tribunal observed that even after the approval of the Plan by the CoC, the CoC be given power to entertain a Settlement Proposal by the Ex-Promoter, the timelines for the different process and its finality shall be breached. Approval by the CoC of a Resolution Plan has to be in accordance with its commercial wisdom and when CoC approves a Plan and the Resolution Applicant is prohibited to modify or withdraw from the Plan, same embargo has to be accepted on CoC also from changing its stand.

The Tribunal noticed Ebix Singapore (P) Ltd. v. Educomp Solutions Ltd., 2021 SCC OnLine SC 707 where the Supreme Court laid down that the timelines provided in the Code have to be adhered to and held that the approval of a Resolution Plan by the CoC is not in the realm of contract but is insulated by the Scheme under the Code and thus bind both the SRA as well as CoC. The Supreme Court further held that after approval of Resolution Plan by the CoC, CoC itself is bound by its decision and cannot be allowed to go back from its decision and pass any other resolution.

The Tribunal observed that CoC's decision to approve the Resolution Plan was taken in its commercial wisdom and the NCLT has not interfered with any decision of the CoC by rejecting the appellant's application.

Finding no merit in the appeal, the Tribunal dismissed the appeal and held that there was no strong reason to keep the respondent's application in abeyance therefore, the Adjudicating Authority has not committed any error in rejecting the appellant's application.

Messiah of the sufferers: Bidding adieu to Justice Ashok Bhushan

*Ritu Singh, Editorial Assistant has put this report together

Kar HC directs State to ensure that no display boards, unauthorized advertisements, hoardings in respect of various Government projects are to be displayed in public places 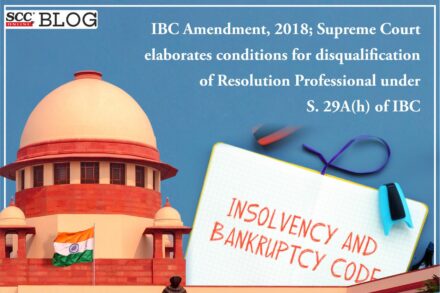