Supreme Court: In the case where the Revenue had challenged Bombay High Court’s judgment affirming Income Tax Appellate Tribunal (ITAT)’s order for writing off assessee’s ₹ 10 crores as a bad debt, the 3-judge bench of UU Lalit, S. Ravindra Bhat* and Sudhanshu Dhulia, JJ has summarised the law on writing off a bad debt and has held that merely stating a bad and doubtful debt as an irrecoverable write off without the appropriate treatment in the accounts, as well as non-compliance with the conditions in Section 36(1)(vii), 36(2), and Explanation to Section 36(1)(vii) of the Income Tax Act, 1961 would not entitle the assessee to claim a deduction.

After going through the scheme of the Act and various authorities of the Supreme Court, the Court summarised the following points:

(i) The amount of any bad debt or part thereof has to be written-off as irrecoverable in the accounts of the assessee for the previous year;

(iii) No deduction is allowable unless the debt or part of it “has been taken into account in computing the income of the assessee of the previous year in which the amount of such debt or part thereof is written off or of an earlier previous year”, or represents money lent in the ordinary course of the business of banking or money-lending which is carried on by the assessee;

The Assessing Officer as well as the Appellate Commissioner of Income Tax [CIT(A)] had disallowed the sum of ₹ 10 crores claimed as a bad debt in determining its income under “Profits and Gains of Business or Profession”. The ITAT, however, allowed the assessee’s plea.

The Court noticed that there was nothing on record to suggest that the requirement of the law that the bad debt was written-off as irrecoverable in the assessee’s accounts for the previous year had been satisfied. Another reason why the amount could not have been written-off, was that the assessee’s claim was that it was given to M/s Bhansali Developers Pvt. Ltd. for acquiring immovable property – it therefore, was in the nature of a capital expenditure. It could not have been treated as a business expenditure.

Hence, it was held that the assessee’s claim for deduction of ₹ 10 crore as a bad and doubtful debt could not have been allowed. The findings of the ITAT and the High Court, to the contrary, are therefore, insubstantial and have to be set aside.

HP HC | Can bail be granted in cases where an accused is a foreign national and cannot furnish local surety in terms of S. 439 Cr PC? HC explains

Telangana HC | “Pandemic is only increasing day in and day out”; State Govt. directed to publish COVID-19 related data not only on internet but also on front pages of all Newspapers 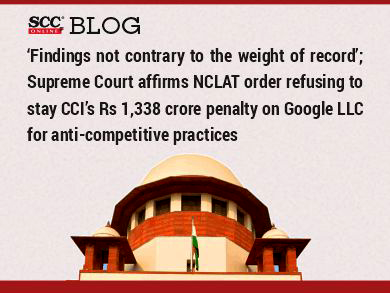