Some disputes had arisen between a law student studying in Shikshan Prasrak Mandals Law College at Raibag (‘the petitioner’) and Babu Annappa regarding a mortgage deed executed in respect of agricultural lands belonging to the petitioner. Due to this, five criminal cases were filed against the petitioner for offences under Section 138 of the Negotiable Instruments Act, 1881 on account of dishonour of cheques issued in pursuance of the said mortgage. Pursuant to this, the petitioner was arrested by the Respondent 3- Police Sub-Inspector, Ankali Police Station after a non-bailable warrant was issued Thereafter, he was allegedly paraded with handcuffs in Ankali Town and later on was taken in a bus in handcuffs from Ankali to Chikodi Police Station, without being produced before the Court.

Later on, the petitioner’s bail application was rejected, and he was remanded to judicial custody. He appealed the order of conviction which was thereby stayed The petitioner alleged that despite the conviction being stayed, he was repeatedly harassed by the police as they would illegally arrest or detain him, visit his house, and threaten him. Thus, the petitioner filed the present writ petition seeking relief in nature of compensation under Articles 226 and 227 of Constitution of India, for the damage caused to his life and reputation due to illegal detention and illegal handcuffing even prior to the petitioner being proven guilty.

Issues framed by the Court:

1. Whether the accused who is arrested can be handcuffed? If so, under what circumstances?

2. If there is any violation by the Arresting Officer, would the accused be eligible for compensation?

3. On what basis is the compensation required to be determined and paid?

4. Whether the accused suffered damage to his life and reputation or not? If yes, then what amount of compensation should be awarded?

A perusal of Section 46 of the Code of Criminal Procedure, 1973 ‘CrPC’ indicates that a person can be arrested by touching or confining the body of the person to be arrested, unless there is a submission to custody by word or action. It is only when there is a resistance to the arrest or evasion of arrest that the Police Officer may use all means necessary to effect the arrest.

Section 49 CrPC indicates that a person arrested shall not be subjected to more restraint than is necessary to prevent his escape. Therefore, it is the requirement of law that the restraint has to be reasonable and only to the extent that the person does not escape from custody.

Section 220 of Penal Code, 1860 ‘IPC’ indicates that if a person who has legal authority to confine a person, confines such a person contrary to law, he shall be punishable with imprisonment, which may extend to seven years or with fine or with both.

Sections 831, 832, 833, 834 and 835 of the Karnataka Police Manual provide for instructions for using handcuffs. A perusal of the said provisions would indicate that the prisoner should not be normally handcuffed, unless he is violent or disorderly or circumstances necessitate such handcuffing. In the event of an accused is handcuffed, the facts and reasons for it is required to be recorded in the Station House Dairy.

Reliance was placed on Prem Shankar Shukla v. Delhi Administration, (1980) 3 SCC 526 and Antonio Sebastiao Mervyn Degbertde Piedade Pacheco v. State of Goa 2008 (6) AIR Bom R 585 and observed that normally during arrest an accused cannot be handcuffed. Only under extreme or exceptional circumstances, such as violent tendencies or the possibility of escape, can an accused be handcuffed. Furthermore, there are some requirements to be fulfilled by the authorities in such a case:

Lastly, the court held that the evidence provided by the petitioner does not sufficiently prove that the petitioner was paraded in handcuffs and his reputation has been as immensely damaged as he claims. Thus, for the procedural irregularity of handcuffing, the petitioner was awarded Rs. 2 lakhs as compensation as opposed to Rs 25 lakhs which was originally demanded.

High Court not obliged to frame substantial question of law if no error is found in First Appellate Court’s findings; says SC

Law on S. 311 CrPC | Power to the Court to summon a material witness or to examine a person present in Court or to recall a witness already examined: All HC discusses 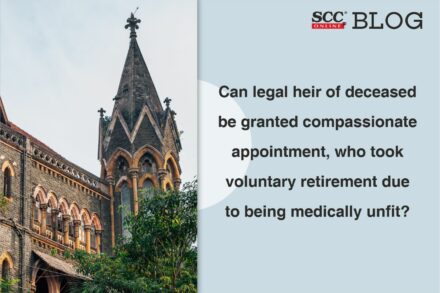 Can legal heir of deceased employee be granted compassionate appointment, who took voluntary retirement due to being medically unfit? Bom HC decides