The 3-Judge Bench of Rohinton Fali Nariman, Navin Sinha and K.M. Joseph, JJ., in a 465-pages long judgment, upheld the validity of several provisions of the Insolvency and Bankruptcy Code (Amendment) Act, 2020, albeit with directions given in exercise of powers under Article 142 of the Constitution of India. While so upholding the impugned amendments, the Bench expressed an observation that:

“There is nothing like a perfect law and as with all human institutions, there are bound to be imperfections. What is significant is however for the court ruling on constitutionality, the law must present a clear departure from constitutional limits.”

In a case where a citizen, who suffers from a writer’s cramp, was denied a scribe in the civil services’ examination, the 3-judge bench of Dr. DY Chandrachud*, Indira Banerjee and Sanjiv Khanna, JJ has held that writer’s cramp Forms part of Entry IV of the Schedule to the Rights of Persons with Disabilities Act, 2016 (RPwD Act 2016) and

“To deny the facility of a scribe in a situation such as the present would negate the valuable rights and entitlements which are recognised by the RPwD Act 2016.”

Read: “In their blooming and blossoming, we all bloom and blossom”; Read how denial of scribe to a person suffering from writer’s cramp led to SC issuing directions for formulation of new policies

“The structures of our society have been created by males and for males. As a result, certain structures that may seem to be the “norm” and may appear to be harmless, are a reflection of the insidious patriarchal system.”

In major win for women Officer in Indian Army, the division bench of Dr. DY Chandrachud* and MR Shah, JJ has held that the administrative requirement imposed by the Indian Army authorities while considering the case of the Women Short Service Commissions Officers (WSSCO) for the grant of Permanent Commission (PC), of benchmarking these officers with the officers lowest in merit in the corresponding male batch is arbitrary and irrational.

The Court hence, directed that the such requirement shall not be enforced while implementing the decision in Secretary, Ministry of Defence v. Babita Puniya;, (2020) 7 SCC 469.

Read: ‘Not enough to proudly state that women officers are allowed to serve the nation in the Armed Forces’; Army’s evaluation of Women SSC Officers for grant of permanent commission arbitrary

Noticing that the summary trials of complaints filed under Section 138 of the Negotiable Instruments Act, 1881 are being routinely converted to summons trials in a “mechanical manner”, the Constitution bench of SA Bobde, CJ and L. Nageswara Rao, BR Gavai, AS Bopanna and S. Ravindra Bhat, JJ has directed the High Courts to issue practice directions to the Magistrates for recording cogent and sufficient reasons while doing so.

Read: No more “mechanical” conversion of complaints under Section 138 NI Act from summary to summons trial; Magistrates “must” record reasons

In a major verdict, the bench of UU Lalit and KM Joseph*, JJ has held that it is open for Courts to order house arrest under Section 167 CrPC in appropriate cases. The order comes as a milestone for curbing the problem of overcrowded prisons and high cost for their maintenance.

Indicating the criteria for house arrest, the Court highlighted factors like like age, health condition and the antecedents of the accused, the nature of the crime, the need for other forms of custody, the ability to enforce the terms of the house arrest, etc.

More stories from May: Supreme Court Monthly Roundup – May 2021

The 3-judge bench of AM Khanwilkar*, BR Gavai and Krishna Murari, JJ has held that the right to control one’s identity is a fundamental right and the Central Board of Secondary Education cannot deny such right by refusing to allow a person to change their name in the Certificates without giving them reasonable opportunity.

Read: Right to control one’s identity a fundamental right; CBSE must permit change of name for just cause

Dealing with the issue relating to the right of promotion under the Persons with Disabilities (Equal Opportunities, Protection of Rights and Full Participation) Act, 1995, the bench of Sanjay Kishan Kaul and R. Subhash Reddy, JJ has held that a person with disability should be considered for promotion along with other persons working in the feeder cadre. It said that,

“There cannot be methodology used to defeat the reservation in promotion. Once that post is identified, the logical conclusion would be that it would be reserved for PwD who have been promoted.”

Read: Govt must reserve posts for promotions for persons with disabilities even under 1995 PwD Act; explore other methods to avoid stagnation

A Division Bench comprising of Indira Banerjee and J.K. Maheshwari, JJ. held that once an Arbitral Tribunal is constituted, the court would not take up for consideration and apply its mind to an application for an interim measure, unless the remedy of applying to the arbitral tribunal for interim relief is inefficacious. However, this bar does not operate where already the application has been taken up for consideration and the court has applied its mind.

Read: SC resolves quandary over interplay of S. 9 and S. 17 of Arbitration Act

The 3-judge bench of NV Ramana, CJ and Surya Kant and Hima Kohli, JJ appointed an Expert Committee to look into the truth or falsity of the allegations in the Pegasus Spyware case, “taking into account the public importance and the alleged scope and nature of the large-scale violation of the fundamental rights of the citizens of the country.”

A 3-judge bench of UU Lalit, Bela Trivedi and S. Ravindra Bhat, JJ has set aside the Bombay High Court judgment that had acquitted the accused under Section 8 of the POCSO Act, 2012 on the ground that no direct physical contact i.e. skin to skin with sexual intent without penetration would not amount to ‘sexual assault’.

In a case where the CRPF had initiated disciplinary proceeding against a person with a medical history of obsessive compulsive disorder  and depression and has been undergoing treatment for the same since 2009, the 3-judge bench of Dr. DY Chandrachud*, Surya Kant and Vikram Nath, JJ has held that the initiation of disciplinary proceedings against persons with mental disabilities is a facet of indirect discrimination as such persons suffer a disproportionate disadvantage due to the impairment and are more likely to be subjected to disciplinary proceedings.

Read: Disciplinary proceedings against person with mental disability is a facet of indirect discrimination; SC sets aside action against CRPF personnel 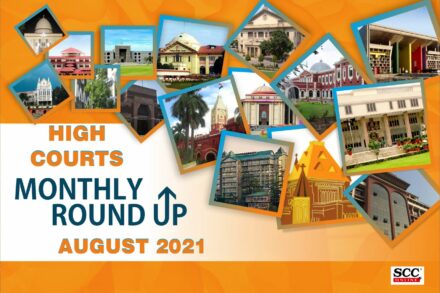 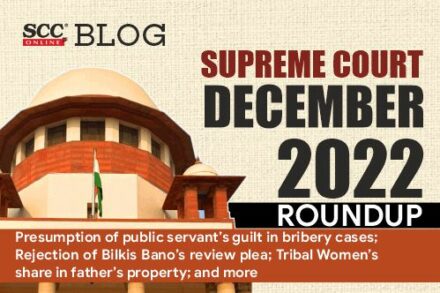